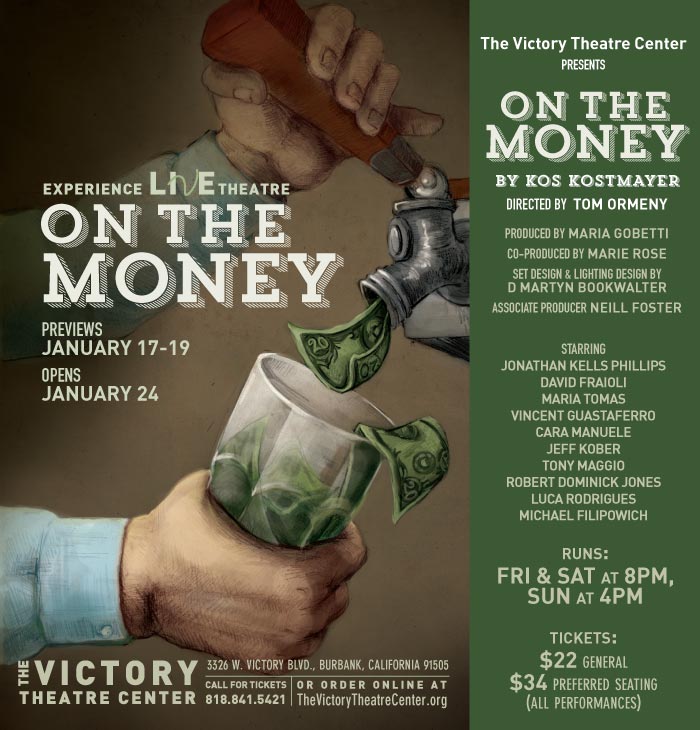 In a town that is largely film and television dominant, true artistry is found in a little theatre in Burbank.

Situated on the corner of Victory Blvd. and Avon St. is The Victory Theatre Center, whose purpose is to bring great theatre and inspiring stories to people from all over.

Artistic co-directors and married duo Maria Gobetti and Tom Ormeny built and founded the theatre in 1979 with the help of family and friends. The two were even married on the stage of the theatre.

On Jan. 24, The Victory Theatre Center will premiere the critically acclaimed play, “On The Money.”

The play, written by Kos Kostmayer, directed by Ormeny and produced by Gobetti, originally premiered at the theatre 30 years ago and was a huge hit. “On The Money” is a tale about personal pressure and the choices people make to get by.

Gobetti and Ormeny decided to reintroduce “On The Money” to the public because it is a story that speaks to society about financial crisis, something that has plagued the American economy for decades.

“It’s the foreshadowing of what’s happening now politically and financially, and what’s happened to the working class, the middle class,” Ormeny said.

The two said the play was very timely 30 years ago and feel that it can still resonate with an audience today.

Gobetti believes “On The Money” is a play that will really make people talk about the ethical issues surrounding the choices they make. It asks profound questions about the nature of our society, our true character and our economic climate. The play focuses on honest, hardworking characters who struggle to make ends meet while trying to support their families.

“The play, in a way, is a morality play,” Ormeny said. “What happens to society when good people have to make decisions that they’re not happy about to survive, when they feel they have to compromise their values to suit the zeitgeist that they see around them?”

Gobetti and Ormeny said the play reflects how the wealthy thrive and get away with crime, while the underclass populate our prisons and the middle class gets squeezed. The play depicts the desperation millions of Americans feel when they struggle to make ends meet in a difficult economy.

While “On The Money” is a drama, it has so much real humor in it, according to Gobetti. The play takes place in a bar and is very character driven with many comedic elements.

“On The Money” had a successful run 30 years ago, and because the message is one that doesn’t expire, Gobetti and Ormeny hope the response will be just as good.

“People screamed and yelled and stayed on the street corner talking about it, and I hope they’ll do the same this time,” Gobetti said.

“On The Money” runs from Jan. 24 through March 2. Find out more information about The Victory Theatre Center at http://www.thevictorytheatrecenter.com.

Check www.myburbank.com/nightlife this weekend for my review of “On The Money.”