John Burroughs High School Dramatic Association presents Thornton Wilder’s Pulitzer prize winning play, Our Town, on May 8, 9, 10 and 11 at the Burroughs High School Auditorium. The three-act play, set in Grover’s Corners, New Hampshire, in the early twentieth century, is performed on a bare set and actors mime their props.

Directed by Drama teacher Guy Myers, with the assistance of student producer Ella Essiambre and a host of student and adult support, the performance relies on deep performances from Burroughs student actors to bring to life universal human truths and experiences, from a small town perspective. 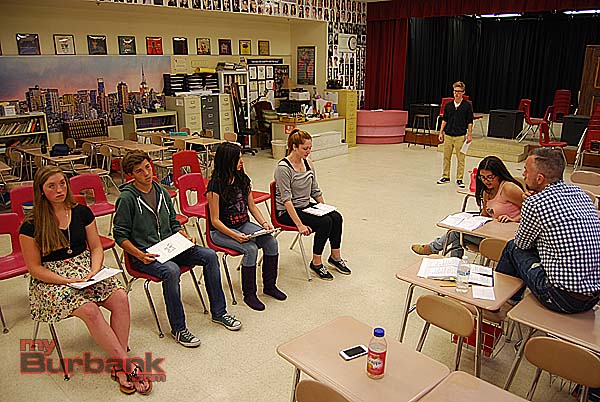 Students rehearse a scene while teacher Guy Myers and student producer Ella Essiambre (seated on the right) listen. Seated on the left are (from left to right) Tenley Patterson, Daniel Beimford, Samantha Rubin and Cassidy Boland, with Nick Apostolina in the back. (Photo By Lisa Paredes)

“Our Town reminds us to appreciate the little things and to not take our time on this earth for granted,” commented Myers. “The timelessness and simplicity of Thornton Wilder’s masterpiece is a reflection of our daily lives and the common experiences in life that make us all human.”

“In many ways, Burbank feels like a small town just like Grover’s Corners, and the play reminds me just how much I love living here,” added Myers, who has taught Drama at Burroughs for six years. 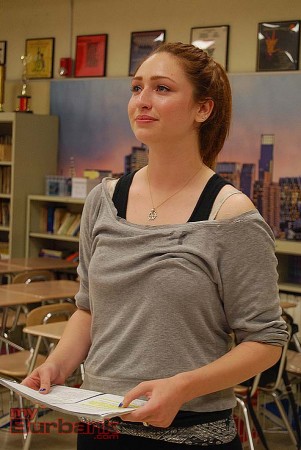 Cassidy Boland works on a dramatic moment in “Our Town.” (Photo By Lisa Paredes)

Senior Cassidy Boland plays lead character Emily Webb in the play. Boland has studied drama at the high school since junior year, although she’s known since age six she wanted to be an actor. She realized the benefits a study in theater could provide her as she moves forward after graduation to pursue her acting dream.

“I absolutely love this class. It’s like I found my home here,” she commented. Boland has been in four plays during her junior and senior years at Burroughs.

“I love this play because I read it my first year. I connected with my character, everything she did and the person who she was,” Boland recounted. “I loved her connection with George and how once she realizes how important the Earth is and the world around her she missed all the little things.”

“It made me actually look around and think about the little things.”

Junior Samantha Rubin has performed in all the Burroughs shows since freshman year. She’s always wanted to act since seeing Rogers and Hammerstein’s Cinderella at age four.

“Joining Play Production last year really helped me grow in a lot of different ways acting-wise and learning what goes on behind the stage,” commented Rubin. “This year in the show, I play Mrs. Gibbs. It’s a challenge but it’s very useful for acting – she is an older character, she is a mother – for a high school student to play that.” 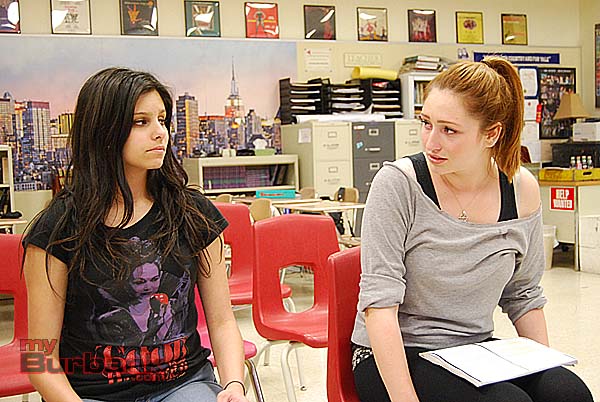 Junior Samantha Rubin and senior Cassidy Boland draw each other out in “Our Town.” (Photo By Lisa Paredes)

“It’s amazing getting to find new ways to change yourself and change the way you speak and your body language to get into that character,” Rubin added.

“I love this play so much because it’s a little screenshot, a portrait, of life in this town. You get to feel so many things from getting to see George and Emily’s relationship, to see the old moms cracking jokes with each other.”

“It’s such a beautiful play and when we found out we were doing it, I read it over and over and over again and still got goosebumps because of how amazing this play is,” Rubin said. 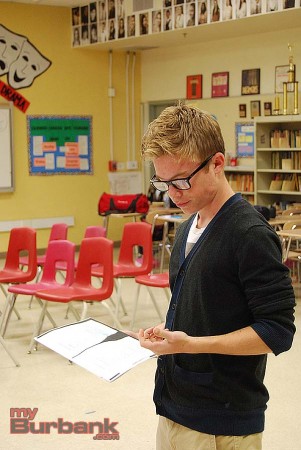 Sophomore Nick Apostolina knew he wanted to study drama when he started in high school as a freshman. He really enjoyed playing Puck in last year’s A Midsummer Night’s Dream.

While Our Town is “one of the most produced plays in college and high school, it’s not until you sit down and read it a few times that you realize why,” Apostolina said. “Everything seems so simple. And then you think about it.”

“My character, the Stage Manager, is such a weird character. He’s there and he’s communicating directly with the audience,” commented Apostolina. “He’s also consistently interacting with the characters. But, he’s also in charge of the play – he’s the Stage Manager.”

“Working with this group of students has been a blessing,” Myers also said. “They inspire me everyday to look at life in a new way and I am truly appreciative of all the hard work they have put into the rehearsal process these last couple of weeks.”

Tickets are $10 general admission and $8 for students and available directly at this link. For more information on the JBHS Dramatic Association, visit their website. 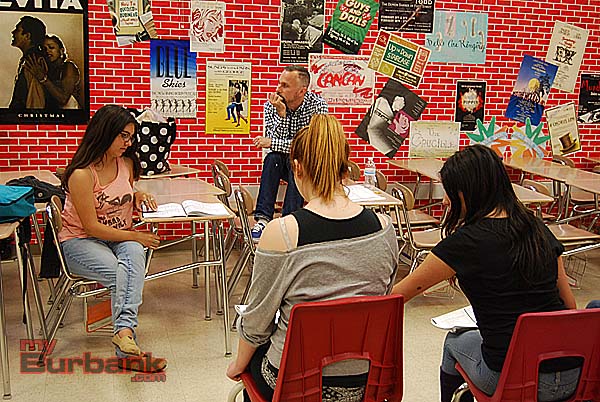 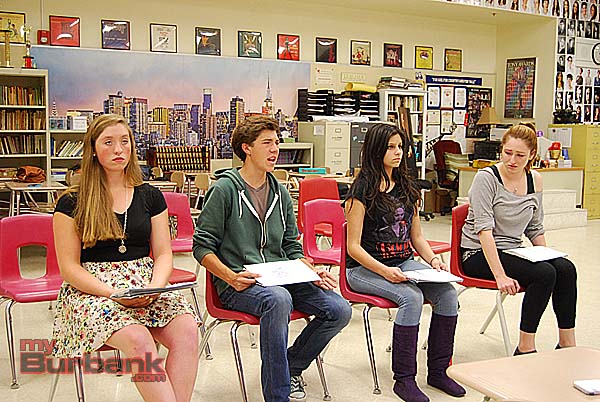