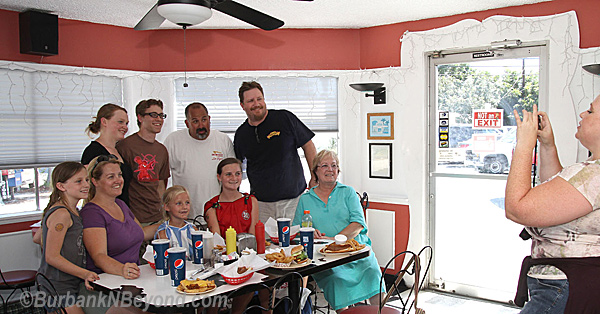 Photography By Ross A, Benson
Story By John Savageau
BurbankNBeyond

The café has seen better days.  Beginning its run in 1949 as a roadside hot dog stand, “Papoo’s Hot Dog Show” has been a part of the Toluca Lake community for 62 years.

Located on the corner of Riverside and N. Rose, the “Dog Show” has added indoor seating, an outdoor patio, and served as a social hub for many people growing up in the area for several generations.
But time has finally taken its toll.  Fierce competition, maintenance, the cost of upgrades, and a sluggish economy all contributed to bringing the “Dog Show” to an end of its run on August 28.
Local residents and patrons honored the restaurant on Saturday carrying signs encouraging drivers to honk their horns

to try and save the show. “I’ve been coming here since 1960, maybe 1958,” said Cassandra Adams, organizer of the “Save the Dog Show” movement.  “I eventually became a mental health therapist, and I think I got my chops doing that here talking about problems, and figuring out the world. It’s like a family here.”

Dakota Muniz added “it’s a historical property, a landmark, and it just shouldn’t be gone.  I am mostly going to miss the logo, and the sauerkraut – it is my favorite food.”
Horns continue to blare as drivers read the signs, and small groups of long time patrons gathered in the restaurant, partly to beat the hundred degree heat, partly to have a final hot dog, burger, or salad.
The ‘Show started out as just “The Hot Dog Show.”  Known for its hot dogs, all named after real dogs, and the friendly atmosphere.  In the late 1970s the name changed to “Papoo’s Hot Dog Show” with a new owner (“Papoo” means grandfather in Greek).  Through subsequent owners the name stayed the same.

“The Mutt” – Just a plain dog with mustard, relish, and onions

A stroll around the ‘Show brings us a nostalgic tour of the 50s and 60s, with wall posters promoting vintage Corvettes, Thunderbirds, Mustangs, and an original Kansas – US-66 highway sign.

A 60-year hangout for high school kids growingup, you cannot help but think of the ‘Show as a hub for conversations, gossip, and discussions mapping dreams of the future, friends who went off to the Korean War, the Cold War, Vietnam, and the Middle East.  Conversations hailing the first steps of Neil Armstrong on the moon, a Dodger World Series win, as well as the horror of JFK’s assassination, the Manson Family, and 9/11.

“The Dachshund” – A dog with Milwaukee Sauerkraut

“I am going to miss just having the chance to come back.  There are very few places like this left from my childhood days still around.  You know the drive-ins are gone, the skating rinks are gone, and it’s just part of my history growing up in Burbank,” offered Peter Herrera as he passed by.

“The Hound” – A dog with hickory smoked barbeque sauce

Jill Share is not only a longtime patron of the ‘Show, but also a former employee.  Jill has memories, stories, photos, and lots of “insider information” on the good old days.

Starting her ‘Show career as a waitress, Jill earned a whopping $2.25 per hour plus tips, “and I had to work really hard for those tips” remembers Share.  During her waitress tenure Share remembers many celebrities stopping in as regulars, including Paul Newman and Jonathan Winters.
Newman, unbeknownst to Share, has a strict policy against signing autographs.  Of course as part of the new guy hazing fellow employees thought it would be amusing to prod Share on to ask Newman for an autograph.  He blew up, she was humiliated.
“After that I never really asked for autographs,” bemused Share.
Jonathan Winters was a regular in the 60’s and 70’s, and would often give impromptu standup comedy routines in the restaurant, to the delight of other patrons, and the slight annoyance of waitress staff and owners “who were not really thrilled about it because nobody would order” remembers Share.  “He would sometimes do a whole comedy routine, and the bosses would be pushing us to get orders.  Nobody wanted to order, because they were busy listening.”

“The Husky” – A dog with chili, onions, and melted cheddar cheese

“I’ve been coming here since I was 6 or 7 years old, a little bit over half a century.  Marie who has been here for a number of years (Marie Cavalluzzi, a 14-year waitress at the ‘Show) is like family, I’ll be missing part of my family” mentioned long-time patron Daryl Demos.   “They used to make this wedge of lettuce with bleu cheese and bacon – it was fantastic, as well as the best BLT I’ve ever had.”

“The Silky Terrier” – A dog with bacon and cheddar cheese

“My husband and I grew up in Burbank.  We were married in 1965, and after the reception were a bit hungry.  We came here after our wedding reception for a bite, and then afterwards we started our honeymoon.  And we’ve come every single anniversary since then, and many, many other times.  We brought our family here, and so I feel sad today.  I understand that things change, and people move on, and they have to do what’s best for them, but it’s OK to be sad too.
They are wonderful people, and they do a great job, and it is a mourning time.  It is a special place.”

“The Chihuahua” A dog with chili, onions, and grated cheese

Eddy Fernandez Jr., who relocated from Miami several years ago, finds the ‘Show a sentimental part of his new Los Angeles life.  “The biggest thing for me is that the ‘Show is the first place I ate after arriving in LA.   I’ve been coming here once every two weeks or so since.  The food is great, the people are always really nice to me, and they treat me well” added Fernandez.  “I wish somebody else would have bought it and kept it open.”

“The Great Dane” – A ¼ pound dog on a toasted bun with mustard, relish, and onion

Automobile horns persisted echoing their support of Cassandra Adams “Save the Dog Show” movement, and patrons continued to order late lunches and talk with sentiment and emotions about the ‘Show’s last days.

Many stories, many memories, and then life in Burbank goes on.
Leona Gardner, the owner, was not available for comment.  However word around the area is that  the new owners will develop the property into an Italian restaurant.

Burbank Divorce Lawyer Reveals 5 Ways to Save Big on Divorce