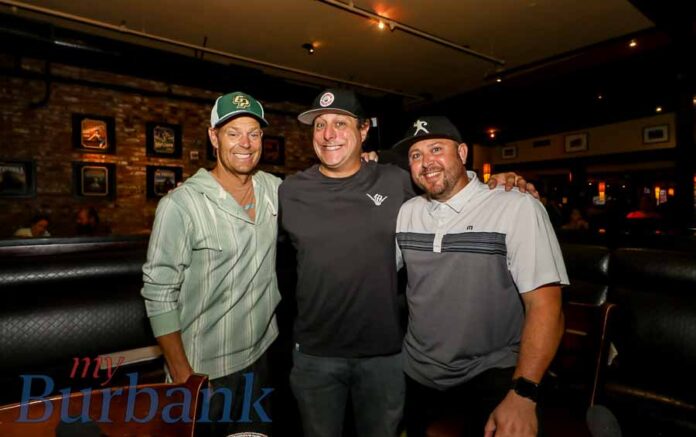 For three hours, including commercials, the wildly popular Petros and Money Show on KLAC-AM 570 will make you laugh, think, and at the very least you will be entertained.

It’s a sports talk show because they talk about the Dodgers, Lakers, Rams, and all the local professional and college teams, but it’s much more than that.

On Monday, the show, which can be heard weekdays from 3:00 p.m. to 6 p.m., and is produced by one-time Burroughs High star catcher Tim Cates, did a remote from BJ’s Restaurant and Brewhouse in Burbank.

As expected, the place was packed with fans who, during commercial breaks, approached Petros Papadakis and Matt “Money” Smith, chatting with them and snapping selfies.

The stars of the show are Papadakis, a former running back at USC, and Smith, the radio voice of the Chargers since 2017, but in a real sense, the unofficial stars are the listeners.

“The goal is to entertain. We take information for granted these days. It’s all on all of our phones,” said Papadakis, who also serves as a college football analyst for Fox Sports. “So, telling you something you already know probably isn’t going to work. We need to laugh together and create a connection through that and music and silly things. Life is hard enough. For us to demand reverence for a sports talk radio show is too much to ask. We just want to see it all as an escape.”

Papadakis takes satisfaction in being a man of the people. When the show is at a remote location like BJ’s, it’s even more zany and fun because the fans are involved and excited because they had a chance to win Dodgers playoff tickets, UCLA Football tickets, and gift certificates through a raffle.

“Yeah, I like connecting with people that listen because it’s part of the mission of the show to connect with those that feel a connection with us,” he explained. “We are lucky to have developed our remote shows over the years through our company and attention to detail. We take pride in meeting and knowing our people and providing something extra in person.”

Papadakis was asked why the show, which is produced in a studio in Burbank, has remained on top for so long.

“I think the show is a success because it offers a little bit of joy and not as much self-righteousness that you find in talk formats,” he pointed out. “We try to keep it light and keep it moving and, most of all, be joyful!”

Smith explained the show’s goal. “It’s to make the commute a little less miserable. Laugh at us, laugh with us, yell at us, pump your fist with us…whatever it takes to help you manage the disaster that is our freeway system, we’re here for you,” he said.

What’s the show’s secret to success?

“We are very local. We have both lived all over the greater Los Angeles area. I’ve been in Malibu, Venice, West Hollywood, Fairfax, Woodland Hills, Los Alamitos, Huntington Beach, and Seal Beach,” Smith noted. “The Show is very local, too many hosts try to do the “Big Story” in sports every day. We just do a show for Los Angeles. We are who we are, people like us, and people hate us, but we’re not making a show that’s fabricated for debate. It’s just whatever the heck we feel like talking about.”

This includes taking a call from Brandon Staley, the Chargers’ coach, who answered questions about Sunday’s 34-24 victory over the host Houston Texans, movies, politics, popular culture, music, history, literature, or an in-house interview with Clayton Stevens, a founding member of the Burbank-based post-hardcore band Touche Amore.

Besides Stevens, who graduated from Burbank High and is the lead guitarist, the rest of the band includes vocalist/guitarist Jeremy Bolm, bassist Nick Steinhardt, bassist Tyler Kirby, and drummer Elliot Babin.

The pairing of Papadakis and Smith has worked marvelously for nearly two decades.

“The show I was doing at KLAC wasn’t working. Petros’ show on 1540 was going away, so we figured it might be fun to do a show together,” Smith said. “Don Martin [Executive Vice President/Programming iHeartMedia Sports], got after it, and here we are 17 years later.”

Smith said the remotes are nice, but it also takes a little extra effort.

“I love and hate the tour stops. I like being in a studio, it’s much easier to do the show. But I love seeing the people and being out with our supporters,” he said. “It’s a really great community of people, so being able to connect with them in person is very special and I don’t ever want to take it for granted.”

Cates’ contributions to the show are enormous, and he also likes being on a tour stop like BJ’s.

“We, as a radio show, love doing remotes and getting out with the listeners. PMS is a show that relies on interaction with the listeners. They don’t always take a lot of calls, but Petros literally gives his personal phone number out every year and encourages listeners to text him,” he said. “Thousands of listeners have his cell phone number and can text him any time of the day. His phone is a conduit between the show and the listeners. Almost every hour of the show, Petros will read listener texts on the air because they are an instant listener reaction to what is being talked about on the show. To then go out and do remotes allows the show and the listeners to interact one-on-one.”

Cates continued: “It’s always humbling to see the number of people who show up. If you watch during the commercial breaks of a remote, Petros and Money will be out in the audience talking and thanking people for being there,” he said. “We never take for granted that listeners chose our radio show as their outlet for entertainment and then took time out of their day to show up and watch the radio show live.”

Cates, who began as an intern in 1997 and then took a full-time job as a producer in 2000 after graduating from UCLA, has been the PMS producer since 2012 and also does on-air work, he was asked why the show has been so popular.

“They aren’t your traditional “numbers and stats” type of sports radio show. Yes, they talk about sports and will certainly report on all the big sports stories in Los Angeles that are happening, but they can also talk about pop culture and music and know how to entertain people,” he noted. “When the world shut down during COVID, we still had to do a radio show every day. Most sports talk radio shows didn’t know what to do for three or four hours a day with no sports to talk about…The Petros and Money Show flourished because they could entertain. They were able to make people laugh or distract them with “Tiger King” talk or “Bachelor” talk.”

All three are extremely busy, and Cates, who batted .452 in 1996 when he was All-CIF as a senior, would have it no other way.

“First and foremost, I have a great wife and three amazing girls who are very encouraging and understanding of my work schedule. I’m also very blessed to have multiple outlets for work. Producing Petros and Money is a full-time job, but the on-air work I am allowed to do and pursue (hosting shows, Dodgers pre/post, UCLA pre/post, Raiders pre/post) is worth the long hours and seven-day work weeks because I’m living out a dream,” he said. “My on-air radio work has opened more doors into the world of television. I’m thankful to Fred Roggin for first putting me on TV (Going Roggin on KNBC 4), as that then opens other doors for opportunities on SportsNet LA and MLB Network. Radio and television are ever-changing businesses, so I am enjoying every second of this ride working in sports radio and television.”