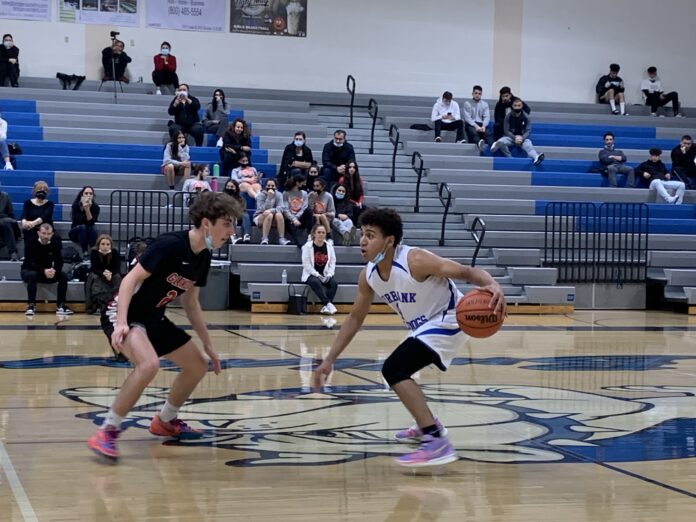 After losing its first two Pacific League contests, the Burbank High boys’ basketball team had to get on the winning track Friday night when the Bulldogs hosted Glendale High.
Burbank did just that thanks to sharp shooter Phoenix Mosley, who had a game-high 26 points in a 70-60 win over the Nitros.
Mosley hit five 3-pointers in the win.
“It is just a lot of repetition in the gym of the same shots, the same footwork,” Mosley said. “Even before the game I was getting shots up.”
Burbank coach Sid Cooke was glad his team got its first league win after losing to Pasadena and Muir highs.
“We’re still learning. There’s a lot of inexperience,” Cooke said. “A win is a win. Our league is pretty tough. We’re a good team, but we have to get better.”

Burbank (3-4 overall, 1-2 in league) never trailed in the contest, but was never able to feel too comfortable as Glendale continued to make things tough.
After Burbank led 30-17 at halftime, Glendale made a surge at the end of the third quarter to cut things to 48-42.
But Mosley was able to hook up with Arman Danielian on a 3-point-play with 3.3 seconds left in the quarter to help give Burbank a nine-point cushion going into the final quarter. Danielian finished with 14 points.
A 3-pointer by Glendale’s Tino Zadourian with 4:14 left made it 56-50.
But Mosley put his team of his back, going coast to coast on a layup with 3:02 to play to make it 60-50.
Burbank got 11 points from Sattwick Banerjee. Nathan Contreras finished with nine points, Julian Gonzalez had six and Alex Emami had four points.
Glendale was led by Dior Pierre, who had 21 points.