Home Sections Entertainment For Piano and Harpo Hits All the Right Notes at the Falcon...
Facebook
Twitter
Email
Print 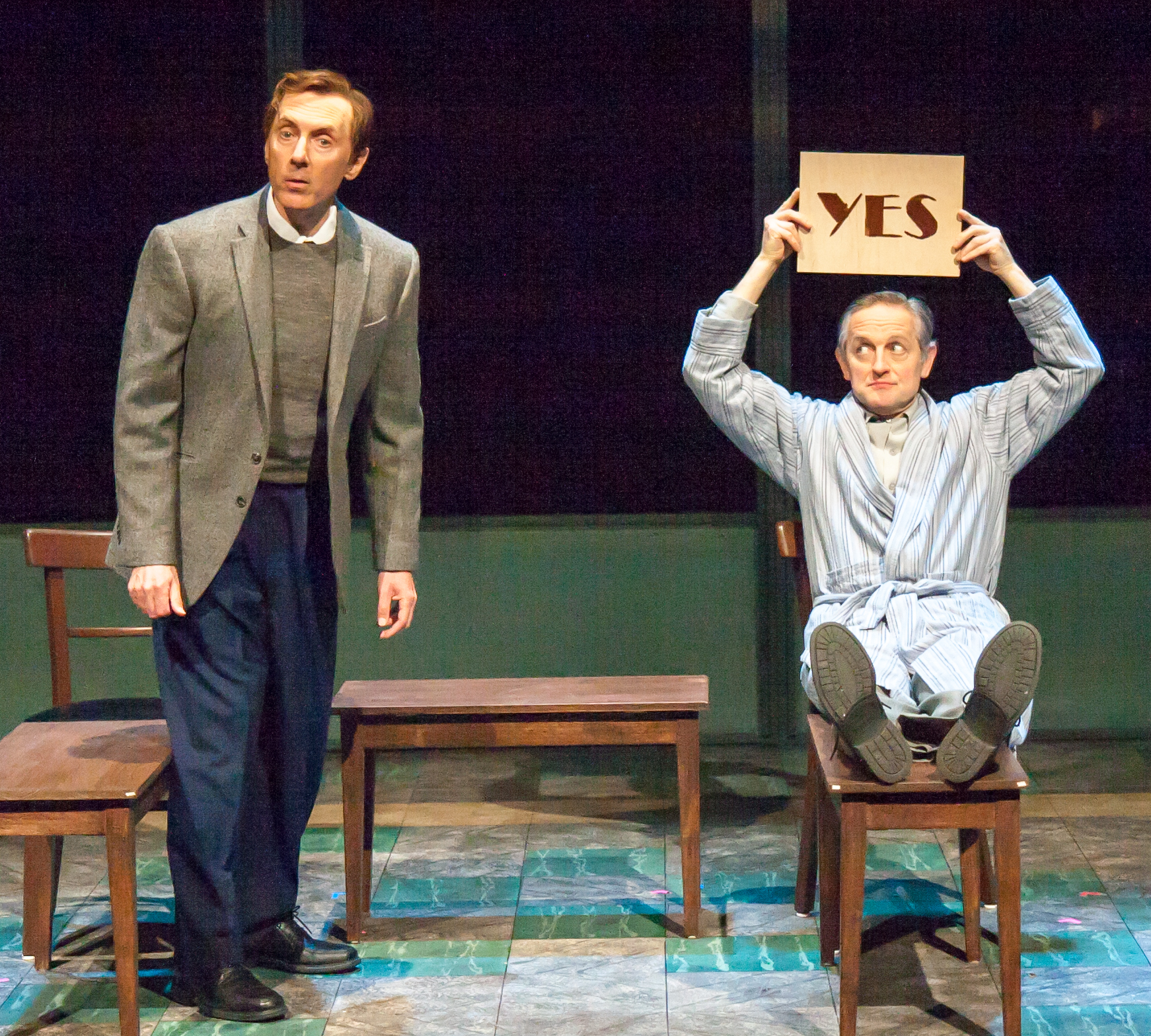 Ever since the late ’80s we have mostly known Dan Castellaneta as the voice of Homer Simpson on The Tracey Ullman Show and The Simpsons, now we are getting to see a different side of him at the Falcon Theatre in For Piano and Harpo. Castellaneta not only stars in the play, he also wrote it.

The dramedy is loosely based on the life of pianist, composer, author, comedian, and actor Oscar Levant during three important times in his life. It starts out in 1962 on The Tonight Show starring Jack Paar, during his comeback after being institutionalized at Mount Sanai Psych Ward in 1956. It also takes place in 1935, when he relocated to Hollywood and moved into Harpo Marx’s mansion without his permission. It also the time that he met his wife. The three time periods interweave into each other therefore it makes sense that the same five supporting actors (Gail Matthius, Phil Proctor, Jonathan Stark, JD Cullum, and Deb Lacusta, who is Castellaneta’s real life wife) play different people throughout his life during these different influential times.

Much of the play takes place during his time in rehab for prescription drug addiction. His roommate is Charlie (Cullum), who doesn’t talk, much like his old friend Harpo Marx. The two create a strong bond as most people do in that situation. Levant’s one-sided talks with his roommate give us an insight to why he was sent there. Something his doctor (Stark) is not successful in finding out during their group sessions. The group includes Barbara (Lacusta), an alcoholic who has hit rock bottom, Shirley (Matthius), an exhibitionist, and Sidney (Proctor), a manic depressant. Levant will fight joining them until he has a realization that explains why he is truly there.

Back in 1935, he moves in with Harpo Marx (Cullum) and although they create beautiful music together, he overstays his welcome. Levant’s obnoxiousness is what makes him star, but it also makes him hated by most. He is his own worst enemy. Eventually, he will make one out of his friend Harpo, just as he meets the love of his life.

One night, while he is out on the town, he meets June (Lacusta) and she has no interest in him. He will do everything in his power to win her over, but she resists. How long can she can resist? Not long because the two fall in love and have two girls.

Two decades later, her love for him forces her to commit her husband one last time. This isn’t his first time he has been in rehab and she wants it to be his last. Mount Sanai is using a new method and this time, hopefully, will be the last time. Not only for him, but everyone that is locked up with him.

Will this sad tale have a happy ending? You will have to see For Piano and Harpo between now and March 5th to find out. A play that is written and acted out so brilliantly, you will feel as though you are sitting in a Broadway audience, just very west of the Great White Way.

I saw this play on Friday night and yesterday when I watched The Simpsons,

I gave Castellanta a standing ovation at the end of the episode. His performance left such an impression on me; I will never watch The Simpsons the same way. He wasn’t the only one who blew me away, Cullum was so spot on as Harpo, I could’ve sworn it was the silent Marx brother. The other cast members along with these two, give such fluid performances you never doubt which time they are in and whom they are playing. Everything transitions so smoothly, you never question what time period they are in and that makes you adore this play as a whole even more.

Another thing that I enjoyed was learning more about several entertainers from an era I had not known much about before For Piano and Harpo. When I got home from the show, I went on the internet to learn more about them and was quite intrigued what I learned. I grew up with the Marx Brothers, but the rest are all new to me. It is nice to see something that not only leaves a positive impression on you, but also leaves you wanting to know more. For Piano and Harpo is just all of that, so run out to the Falcon Theatre and see the play before it ends its run on March 5th.