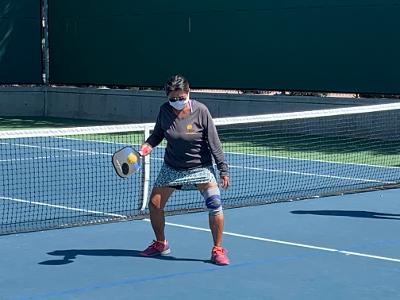 With limited opportunities in the city to play sports during the COVID pandemic, the Burbank Tennis Center at McCambridge Park has remained one of the few places that remains open.

The public tennis club has also done its part in recent years in helping give the opportunity for more individuals seeking to get in some exercise.

Recently, pickleball has expanded to the Burbank Tennis Center and has started to become very popular as tennis courts have been transformed into pickleball courts. Pickleball courts are similar in dimension to a badminton court. Pickleball is similar to tennis, but played with a wood paddle and a whiffle ball.

Roland Sunga, who runs pickleball at the Burbank Tennis Center, said courts are open specifically for pickleball weekdays except Wednesday from 9 a.m. to noon, as well as on Saturday.

Pickleball is still also played at Olive Recreation Center and Pacific Park.
“It is the biggest growing game in the United States,” said Sunga. “You will not believe how big it is. I won’t be surprised if it surpasses tennis.”

Starleaf said there are four pickleball courts that are available to play on free of charge.

But due the popularity, the tennis center also has additional courts available for those who do not want to wait.

Those courts can be reserved for $10 an hour.

Starleaf said pickleball in popular amongst players who don’t want to play on a full-sized tennis court. Doubles tennis is currently not being played at the Burbank Tennis Center as a precaution due to COVID.

“The court is very small. A lot ex-tennis players play pickleball because there’s not a lot of court to cover,” he said.

For more information on pickleball at the Burbank Tennis Center call (818) 843-4105 or visit burbanktenniscenter.com.