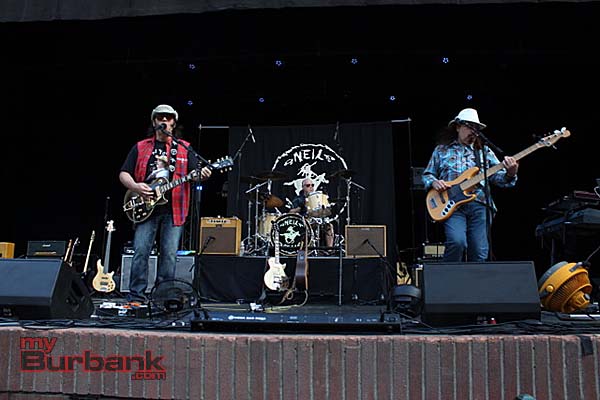 On Saturday, August 3,  The Starlight Bowl flooded with tons of “Pink Floyd” and “Neil Young” fans selling out “The Bowl’’.

The show kicked off with a Neil Young tribute band “The Neil Deal” playing songs like “Old Man”, “Sugar Mountain” , “Keep On Rocking In The Free World” and many more Neil Young classics.

Neil Young impersonator/front man of the band, Dennis Neil, said, “ That the reason he started a Neil Young tribute band is because he has been a big fan since he was fifteen and has always had a special place for Neil’s music in his heart.” He also stated, “We have been in a tribute (band) for 18 years, and have always enjoyed playing venues from ten people to venues of 8,000 plus people.”

As “The Neil Deal”, ended their set with “Keep On Rocking in the Free World”, the main act “Which One’s Pink” enlightened the stage with their presence.

They also played classics like, “Money”, “Another Brick In The Wall”, and “Wish You Were Here”, and many more. They ended the night with a laser light show.

As “Which One’s Pink” continued with their show, more and more people entered the pit, enticing more people to join. Both “The Neil Deal” and “Which One’s Pink” did an amazing job at replicating the style and spirit of their idols. The crowd was feeling those things from them and reciprocated back to them, making it a more of a joyous and fun event.

At the end you could see people leaving with a smile, showing that it was truly a phenomenal show that took them back in time.