The new number two at the Burbank Police Department said this week that he appreciates his predecessor even more now.

Mike Albanese, who earlier this month replaced Tom Angel as deputy chief, came on board as a patrol captain in 2010 and has also overseen the implementation of the Burbank Mental Health Evaluation Team (BMHET), which was recognized by the State Attorney General’s Office, among others. 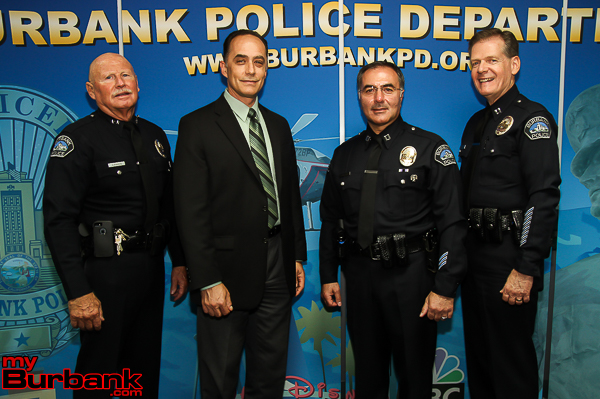 “I didn’t really appreciate Tom Angel until he left,” Albanese said. “Now that I’m doing Tom’s job I have a better understanding of the bureaucracy, and I engage with all sorts of folks — the day goes by very, very fast.”

Albanese will continue to have responsibility of the mental health team, in addition to new duties that include Internal Affairs, Professional Standards and Budget and Finance.

Former Deputy Chief Tom Angel joined the Los Angeles County Sheriff’s Department in 1976 and retired in January 2010 as a division chief. Later that year he joined Chief Scott LaChasse, Capt. Denis Cremins and Albanese in Burbank to right a department in desperate need of leadership and modernization.

Angel accepted a position as chief of staff with the sheriff’s department, and his departure from Burbank left an opening that Albanese is now filling.

“It’s been a great journey,” said Albanese, a 37-year veteran of the Los Angeles Police Department with more than 26 years of experience in SWAT and crisis negotiation. He retired in December 2008 as the department’s SWAT commander before joining Burbank in April 2010. 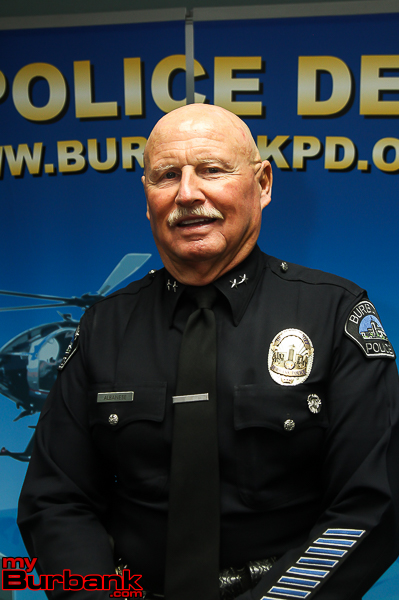 “I immersed myself in the organization like everybody else did,” he said. “The quest was to make sure the practices were the most contemporary and that we were not following law enforcement trends but going to take a lead. As an organization the last five years we really evolved into one of the marquis law enforcement agencies in Southern California, dare I say the state.”

The conversation turned to challenges and Albanese shared how different policing was when he started his career and the importance of technology for police.

“You do not chase technology, you optimize technology and be conversant with technology,” Albanese said. “When I came on the job, there was very limited technology. Now, it’s bountiful…if you are not paying attention it will get away from you.”

Albanese began his career in law enforcement in 1971.

“I was given a revolver with six bullets and a wooden stick,” he said.

There were no hand held radios, no body cameras, no cell phones. There were dead spots on the radio depending on where you were in the city. There were manual typewriters at the station.

Today, everybody has a computer at their desk, Albanese said, noting he has two monitors.

With Albanese’s appointment to deputy chief, Capt. Cremins now oversees the patrol division. Cremins was in charge of investigations, which Capt. Ron Caruso is now at the helm of. That left Caruso’s former role as support services division captain open.

And 20-year veteran Armen Dermenjian, formerly a lieutenant responsible for policy development and technology improvements, among other duties, was promoted earlier this month to captain of the support services division. 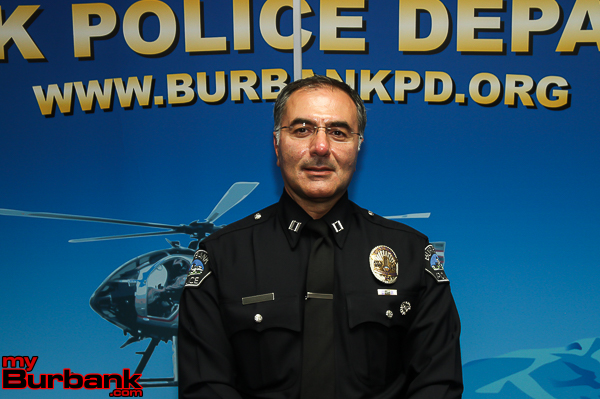 “Seems not long ago I started with the department,” Dermenjian said, adding that he will continue to guide the department’s implementation of technology.

That technology includes updating the department’s primary system for police work, then training everyone on the new system.

When asked about the change he’s seen over the last five years, Dermenjian said the police chief’s vision is for the department and its members to engage in continuous improvement.

“Continuous improvement is becoming part of Burbank Police Department culture,” Dermenjian said. “For a long time police provided outstanding service to the community, but the belief was that we were a great police department and there was no need to change anything.

“That may have been the thinking decades ago, but today, in an ever-changing environment, we always have to engage in self examination and find ways to do do better and provide the highest quality service to the community.”

Dermenjian oversaw the process for the department’s accreditation by the Commission on Accreditation for Law Enforcement Agencies, or CALEA, an independent body created by the U.S. Department of Justice. Agencies with CALEA accreditation are able to show they met a body of professional standards.

When the department embarked on the roughly three-year quest to receive accreditation, it was one of the ways to make peace with a past scarred by discrimination and sexual harassment lawsuits, and allegations of excessive use of force.

The department received accreditation in November 2014.

About 50 law enforcement agencies were present during an awards ceremony at a CALEA conference in Albuquerque, New Mexico.

“It was a proud moment for us to receive our first accreditation,” Dermenjian said, adding that he was excited about his new position, and new responsibilities.

“There are many new things to learn, and I am looking forward to working with the people in support services,” he said. “I will be involved in many technology implementations, so the work continues.”

Another veteran is also playing a prominent role with the department.

In the first 10 days as the newly appointed public information officer for the department, the sergeant was handling media requests about a fire-robbery incident on San Fernando Boulevard and a home invasion robbery that left an 89-year-old woman with bruises on her face and a broken collar bone.

Sgt. Claudio Losacco has been with the department more than 16 years and is also a former president and vice president of the Burbank Police Officers Assoc. (BPOA) and former board member for the union.

When asked if he saw any similarities in his current role and his previous duties as BPOA president, Losacco noted one.

“You have to obviously be aware of what’s going on and what the image of the department is,” he said. “In that regard you have to know what the public is seeing and what it is looking at.”

As BPOA president Losacco had at times been critical of the department.

“They are two different roles,” Losacco said. “The organization put me in this role, and the thing that is not going to change is how I go about my job.

“The goal is to do the best I can. For the role I’m in, I will continue to do that. As BPOA president I did the best job for the people I was representing. In the chair I sit in right now, as spokesperson for the department, I will do the best in that job.”

In terms of being a department spokesman, Losacco also said he is now “doing something completely different when I get to work.”

He called it a challenge with a “steep learning curve.”

“It’s a learning curve as to what the expectation is from you folks,” Losacco said, referring to the media.

On Thursday, there were over dozen other staff promotions: 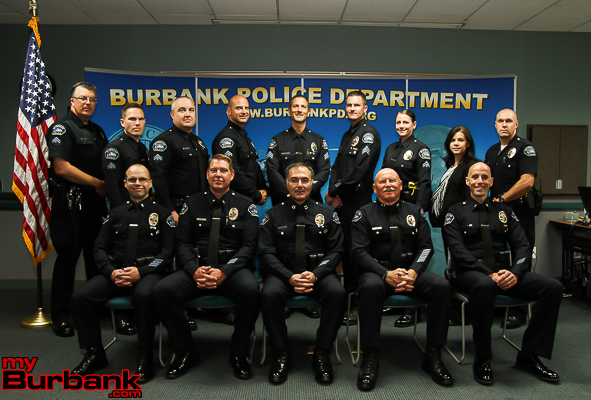 Lieutenant Armen Dermenjian promoted to Support Services Captain.  Captain Dermenjian has been with Burbank PD since 1993.  He was a Reserve from 1993 to 1995.  He holds a Master’s Degree from Cal State Long Beach.

Detective Martha Jimenez promoted to Sergeant.  Sergeant Jimenez has been with Burbank PD since 2004.  She was a Burbank PD Explorer in your youth and later became an Explorer Advisor.

Sergeant Jimenez was the Burbank PD Officer of the Year in 2010.  She also received the Rex Andrews Scholar Award in 2013.  Sergeant Jimenez holds a Master’s Degree from Woodbury University. 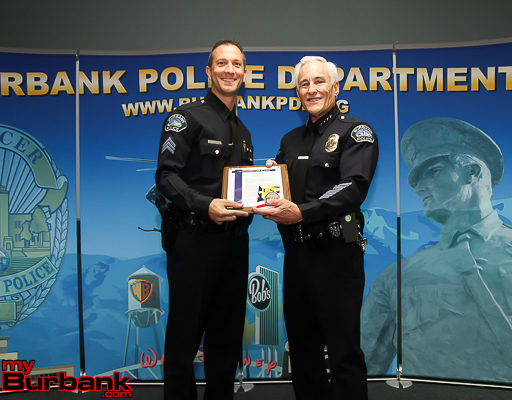 Detective Jeff Barcus promoted to Sergeant. Sergeant Barcus has been with Burbank PD since 2003.  He has worked gangs and vice/narcotics.  He was with LASD before coming to Burbank.

Sergeant Barcus was awarded the Police Medal in 2005 for his response and actions related to an in-progress business burglary and confrontation with the suspect who was armed with a handgun. 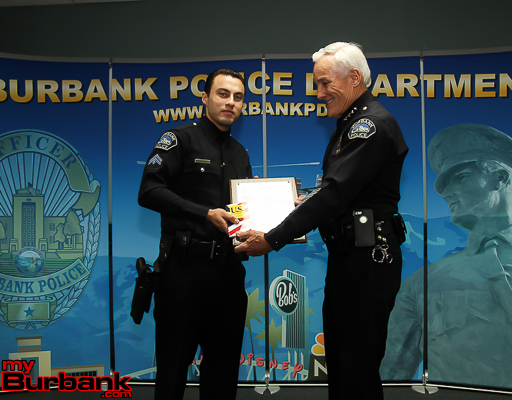 Officer Gevork Mirakyan promoted to Detective.  Detective Mirakyan has been with Burbank PD since 2008.

School Resource Officer Brittany Henneberque promoted to Detective.  Detective Henneberque has been with Burbank PD since 2008.  She was a cadet and jailer before becoming an officer. 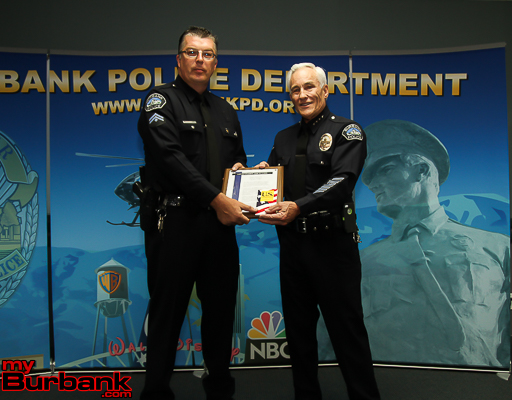 Officer Andrey Starkov promoted to Detective.  Detective Starkov has been with Burbank PD since 2008.  He is from Minsk, Belarus and holds a Bachelor’s Degree from Belarus State University.  He also has a Master’s Degree from the University of Phoenix.

Officer Marc Zimmerman promoted to Detective.  Detective Zimmerman has been with Burbank PD since 2008. 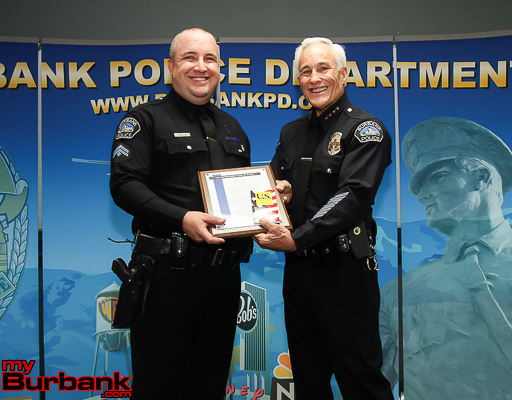