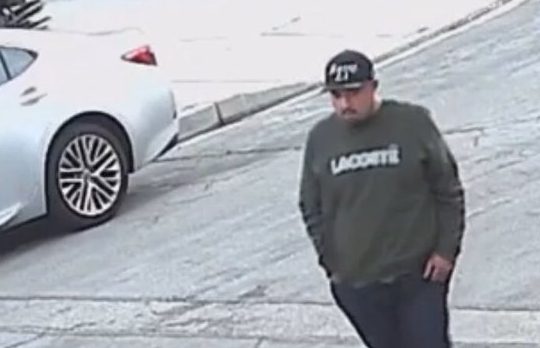 Los Angeles Police recovered a Chevrolet Pickup Truck that had been stolen from Vista Ridge in the Starlight Estates on the morning of June 30.

The resident awoke to find his car missing and after checking with a neighbor who had a camera, found that a man had been walking in the area at approximately 6 am, and checked the door of the neighbor’s Lexus to try and gain entry.

He then moved over to the victim’s home where he was able to steal the vehicle with a red car that he had been a passenger in when he arrived and was dropped off, then followed him out of the area.

Burbank police were called around 8 am for a report with the victim calling his car dealership who told them that they had a tracker on the vehicle and that it was currently parked in Los Angeles.

LAPD found the truck at noon in the 200 block of Alvarado in a parking structured and recovered the vehicle. They contacted the residents who went to pick it up and found the backseat of the truck already was loaded with stolen items and clothes. The only thing missing from the vehicle that belonged to the owner was the dashcam.  LAPD confiscated all the other items as evidence.

The victim supplied us with photos of the man who they believed stole the vehicle and a look at the belongings that were left in it at the time they picked it up.

This all comes at a time for Starlight Estate residents who have been overrun for the past few months at night of people coming out and hanging out in the area. Police have made numerous attempts to stop the swarms of people, who are mostly not Burbank residents, from stopping in the area with new restrictions voted on by the Burbank City Council. No word if this person had been seen up there on one of those nights and had been possibly casing the area for vehicles.

Sgt. Derek Green of the Burbank Police Department had nothing to add stating in an email, “We have no other details at this time.”

Elementary Ashley Erikson - October 26, 2021 0
Darlene Crain’s second grade class from Bret Harte Elementary, have created clay monster mugs which are on display at the Ugly Mug Coffee House until Halloween. Owners of the Ugly Mug Coffee House, Steve and Emily Nalbantian, had children attending Bret Harte when their coffee shop first opened. “I remember thinking how it was such a great name for a coffee place and the idea just came to me,” said Crain, who tries to do this art project each year with her students.

News Ashley Erikson - October 26, 2021 0
The Moms of Burbank or MOB for short is an essential social support group for local moms and caregivers that organizes weekly playgroups, monthly service projects, parent night out events, and holds an active private online community. Earlier this year, member Pearl Wu, was diagnosed with breast cancer, and became the inspiration for an upcoming Halloween themed 5k run in which members of MOB will be running in order to raise money for a non-profit organization called Metavivor that funds research for Stage IV metastatic breast cancer.