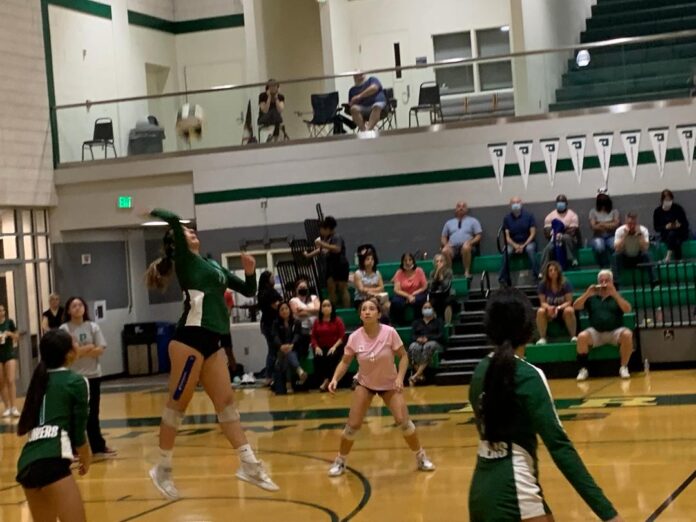 There are lots of different approaches to athletic contests and the Providence High girls’ volleyball team may have benefitted from one that not every high school team has the luxury of having.

“I feel like we fought through a lot of adversity. I’m extremely proud of my girls for fighting through that,” Providence coach Shelby Stanger said.  “We’ve been working a lot on stress management on the court. We actually brought a therapist that came in yesterday and had talks with them about how to find our stresses on the court and how to react. I feel that played a big part in tonight’s win.”

A block, followed by a kill from 6-foot-1 senior Eleena Amirian were the difference in the fifth and final game on the final two points of the match.
Amirian led her team with 19 kills.

Providence (11-5 overall, 1-1 in league), took an early lead in the first game, going up 10-1 before being caught by the Dolphins. Chadwick actually went up 24-22 before Providence fought back with four consecutive points to prevail.

The second game was also close as Providence broke away from a 17-17 tie to win by six points.
But things changed in the third and fourth game, as the momentum swung in Chadwick’s favor. The Dolphins won both relatively easily.
Providence received three additional kills from Emirian in the fifth game.
Luciana Mongelli had a big kill to make it 9-7 and even setter Gabriella Aves earned a point with a kill to make it 11-10 in the fifth game.
Providence also got 12 kills from sophomore Shannon Ferrell. Sophomore Kylie DeVries had six blocks.
Aves finished with 27 assists.
Providence plays at Rio Hondo Prep on Thursday in Prep League action.