Crimes are committed, field interviews completed, arrests made, statistics recorded. Data, data, and more data compiled and stored.  In the past the data waited until an officer or detective needed to research an event.  Today, Jessica Statland, a crime analyst with the Burbank Police Department, harvests data, crunches crime history, trends, and produces a product for police which will put them where and when a crime is most likely to occur. 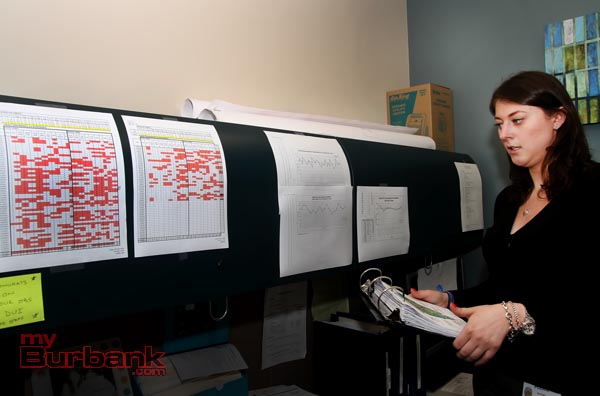 Jessica Statland Crime Analyst for The Burbank Police Department compares information supplied by patrol officers to help reduce the crimes in the city.. (Photo by Ross A. Benson)

“This is intelligence-led policing” advises Statland, a graduate of Cal State Fullerton and Brandeis University.  Following a 400 hour internship with LAPD, Statland joined the Burbank Police Department in May 2012.

Complementing standard police utilities such as the Computer-Aided Dispatch and Records Management Systems (CAD/RMS) and COPLINK, Statland adds her own analytics to local databases providing a holistic view of the “wheres,” “whens,” “whys,” and “hows” of crime in Burbank. 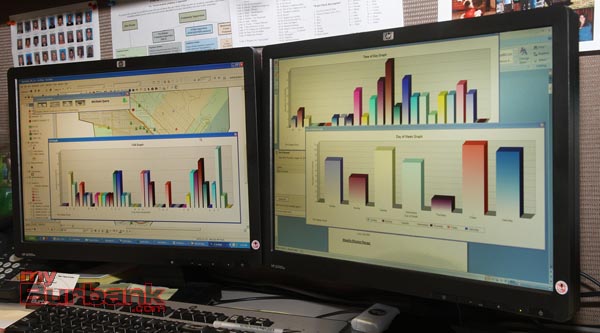 Prepared data, graphs, information, is some of the tools Jessica Statland Crime Analyst uses and is supplied to the Burbank Police Officers to help reduce crime in Burbank (Photo by Ross A. Benson)

“Everything about crime falls within a feedback loop” continues Statland. “you have to put people where they need to be.”  Using a commonly used law enforcement problem-solving method called SARA (Scanning, Analysis, Response and Assessment), Statland provide officers a projection of where crime is likely to occur within a designated time frame.  The result is a set of mission areas, with designated boundaries, where officers will spend a set amount of time patrolling during the course of each shift. 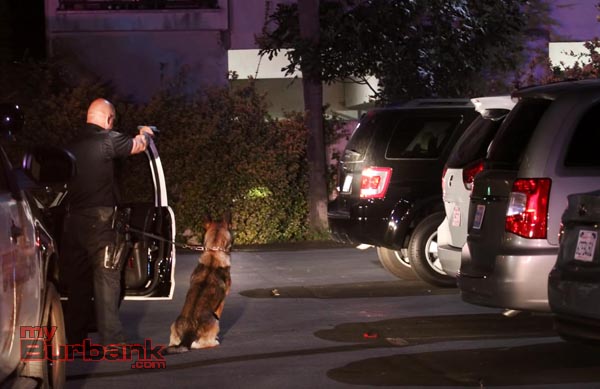 Officers keep logs of their daily shifts, and within the log time spent within a designated mission boundary area is correlated with crime detection, as well as prevention. “Just having a police presence within a boundary area may be enough to deter crime” notes Statland.  In fact, since the program started Burbank has seen a greater than 5% overall decrease in crime, with clear results in designated boundary areas.

Statland emphasizes a mission goal of her unit is to give officers additional tools to prevent or deter crimes, and enforce the law when a crime is committed.  While violent crime is relatively rare in Burbank, other crimes such as property theft are much higher.   So, in addition to using a framework such as SARA, Statland also employs additional high level tools such as the crime and disorder ”Problem  Analysis Triangle.” 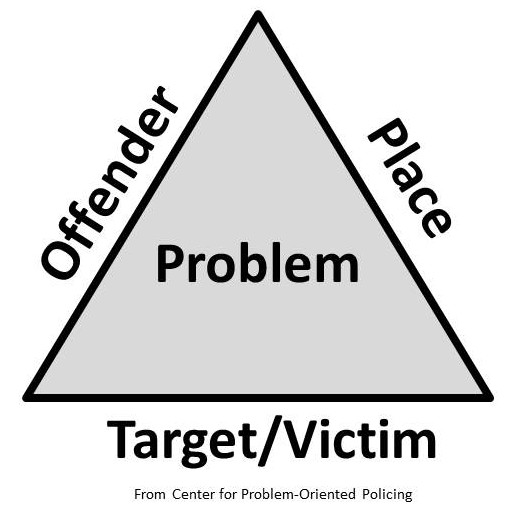 The triangle makes an assumption that any crime has three common characteristics, which are a location or place, an offender, and a target or victim.  Statland uses her data bases and analytical tools to try and narrow down the place portion of the triangle.  Then through a combination of increasing police presence through patrols within designated mission boundaries, as well as embracing community or neighborhood policing (the process of the assigning police officers to a particular area so that they become familiar with the residents and the residents with them) try to “harden” potential crime targets.

As crime targets and places are “hardened,” the “offender” part of the problem will avoid those target areas.

Statland also explained that citizens are not left in the dark on police activities in the area.  In addition to crime reports published by news sources (including myBurbank.com) citizens also have access to a slightly watered down version of one of the department’s core tools provided by the Omega Group called CrimeMapping.com. 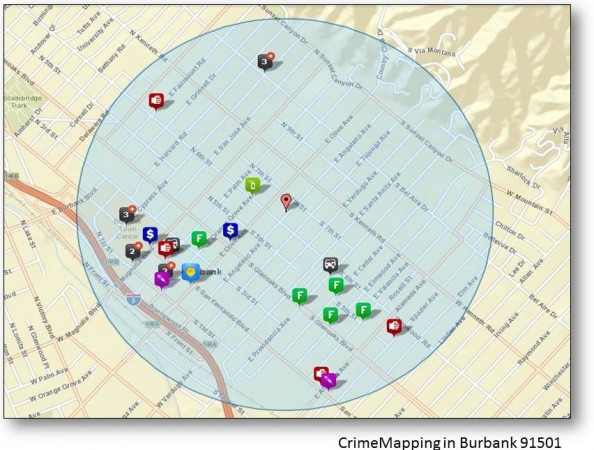 According to Statland knowing where crimes are happening, increasing knowledge and use of crime prevention techniques, and adding “predictive policing” through increased patrols within designated mission boundaries will help the community reduce crime and improve safety.

Statland is not on her own in Burbank’s efforts to implement intelligent policing.  Perhaps her greatest supporter is Burbank Police Chief Scott LaChasse.  A former commander, and veteran of LAPD’s most crime-ridden districts, LaChasse fully understands the value of using intelligence-based policing in reducing crime.

LaChasse stresses “we have an obligation to use all tools available” in the effort to reduce crime.  He further believes adding technology to policing is a continual growth process.  Adding the Burbank Police cooperate and share crime data with many additional law enforcement agencies within the Southern California region, as well as other national agencies, there are many opportunities for adding additional value to the data available to Statland.

LaChasse notes 3 priorities for developing technology and the use of data, including:

With the 5 and 134 freeways cutting through Burbank, many of our crimes are committed by offenders coming to the city from other jurisdictions.   Therefore Burbank needs to share data with all other agencies in order to better manage and understand the characteristics of crime within the city. 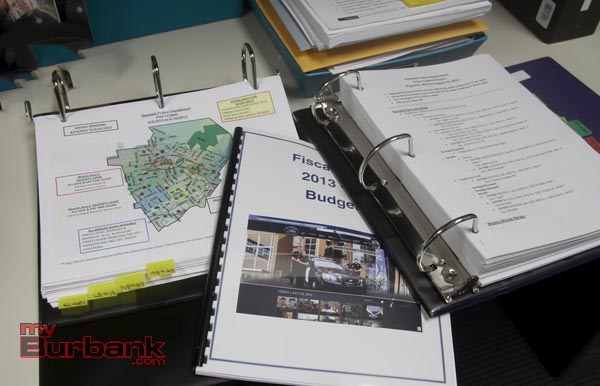 Reports, Data, Mapping, and more is what Jessica Statland uses to rid the city of crime. (Photo by Ross A. Benson)

While many tools are available, including law enforcement systems such as Palantir, COPLINK, and others, LaChasse also looks forward to the future availability of systems originally developed for the military, which are going through a declassification process before being transferred to civilian agencies.

“We need to strive for continuous improvement” repeats LaChasse.  “Although we are moving very fast in the use of intelligent policing tools, unless we continually improve we will fall behind.”  And that roughly translates into higher crime rates and reduced safety for resident and visitors to Burbank. 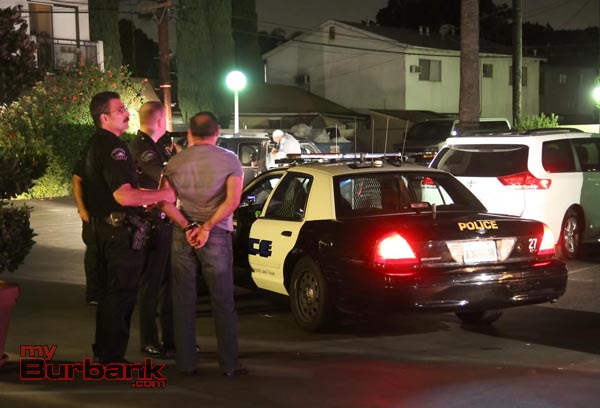 Statland also acknowledges a need to keep on top of her technology game.  There is always a “wishlist” and desire to upgrade computers, add software modules to existing applications, provide better data collection and automation tools.

However in the age of big data, deep data analytics, and development of law enforcement information technology tools, Statland understands the need to aggressively continue studying the science of intelligent and predictive policing and value of communicating with and participating with area law enforcement organizations implementing programs.   The culture of continual improvement.

If you are interested in learning more about the Burbank Police Department, check out their website at www.burbankpd.org.  The website provides additional information on crime statistics, daily crime reporting, and many additional police department activities.