On 28 February Burbank N Beyond’s John Savageau had the opportunity to interview Representative Adam Schiff from the 29th District, encompassing Burbank, Glendale, Pasadena, and surrounding areas, in his Washington D.C. office.  This is the fourth article in a series highlighting activities and topics of interest to Burbank.

BurbankNBeyond:  The SOPA and PIPA Acts didn’t do too well over the past few weeks.  Where does the entertainment industry that’s centered in Burbank go to ensure the hard work of our industry is not lost? 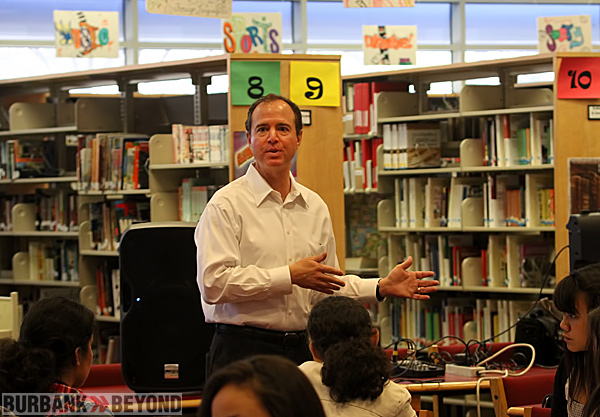 Rep. Schiff:  That’s an excellent question.  I spoke recently at Burroughs (High School), and I visited two of the other schools in my district.  Invariably SOPA came up as an issue that young people in particular are very wired into.

There were three forms of opposition to the intellectual property legislation.

One that I would characterize as legitimate concerns.  People who were worried that it would have an adverse impact on 1st Amendment freedoms.  That is not the intent of the bill, I don’t think it’s the effect of the bill, but people have a sincere concern about that, and we ought to address that concern.

But there were two other forms of opposition to, there’s the opposition of people who think whatever you get on the Internet should be free.  That it’s sort of a right to enjoy the product of somebody else’s labor if it’s on the Internet.

And that I don’t have much sympathy for.  To me it’s no different to steal someone’s song, or someone’s film off the Internet than it would be to steal a CD or DVD from a record store.

The final opposition, and this was in many cases the most formidable, because it was the most heavily financed and organized opposition, was those who like to advertise on pirate sites.  That’s where the revenue comes from.  And it’s big business.  There are millions of eyeballs that go to these pirate sites and companies generate revenue from that.  Legitimate companies generate millions of dollars from illegitimate sales.

This (SOPA) is really an effort to go after that.  To the critics of SOPA, in the technology sector I would say if you don’t like SOPA than what do you propose?  Because we can’t continue to allow billions of dollars of product to be stolen.

This is one area of competitive economic advantage to the United States.  We are really good (at creating) intellectual property – at software, at music, at films, and other forms of IP.  And we can’t afford to have the area that we really excel ripped off.

And in other areas where other countries excel , simply purchase their goods.

Somehow that message really hasn’t penetrated and we need to do a better job to get that word out.

Rep. Schiff:  The discussion is still very much alive, and it will be as long as this massive theft continues.  It really is unsustainable.  It will not only destroy the industries, but it means many, many thousands of jobs in our community.

They are set designers, they are lighting people, they are electricians, and they are sound mixers, and they’re working fewer weeks a year than they used to because a lot of their work product is stolen.

So it has a real job impact, and as long as that’s the case we’re going to have to find a way to attack the problem.

BurbankNBeyond:  Do I (for example) as an network operator or Internet service provider have an obligation to support SOPA?

Rep. Schiff:  I don’t think that the ISPs can simply wash their hands of what’s transmitted in their pipelines (saying) “that’s really not my business.”  My guess is that since we’ve seen some of these companies merge, where they’re not only in the content creation business, they’re in the content delivery business, and where the delivery of content now is being slowed down by the volume of piracy in the pipeline – it’s starting to hurt their bottom line.

I think there will be a new found interest in the pipelines and the ISPs as it starts to affect their bottom line.  The challenge is to find a way that legitimate companies are not facilitating illegitimate traffic and purchases in a way that does not impose too much of a burden on them, in a way that provides adequate due-process for hosting legitimate content, but in a way that also recognizes that (for example) if you’re a merchant bank, and you allow your credit card services to illegal content, you are contributing to the problem.

And if you are a legitimate company and you are allowing your product to be sold through advertising on illegitimate sites you are part of the problem.

If you are a pipeline that turns a blind eye to sites that are trafficking millions and millions of dollars of stolen goods, you are part of the problem, and everybody needs to be part of the solution.