On August 5th myBurbank had an opportunity to meet with Rep. Adam Schiff from California’s 28th District in his Burbank office.  Rep. Schiff is very active in Washington, serving on committees including the House Renewable Energy and Energy Efficiency Caucus and the House Permanent Select Committee on Intelligence – in addition to being the champion of numerous house initiatives related to the environment and transportation.

In this first part of a two part interview, Rep. Schiff discusses energy independence and climate change, and how both impact the future of Burbank residents.  Part two will review his activities and opinions on transportation, security, and recent discussions related to privacy and the NSA/FISA.

myBurbank: What initiatives are you engaged with related to energy, renewable energy, and approach to fossil fuels?

Rep. Schiff: I’ve always been a big proponent of an “Apollo-like” project to wean ourselves off of foreign oil, and reduce our reliance on fossil fuels generally.  I think the biggest missed opportunity after 9/11 was to not have, then President Bush, make this a national priority.  Asking all Americans to make the investment in other technologies, and renewable sources of energy.

And I’d like that to be the United States. 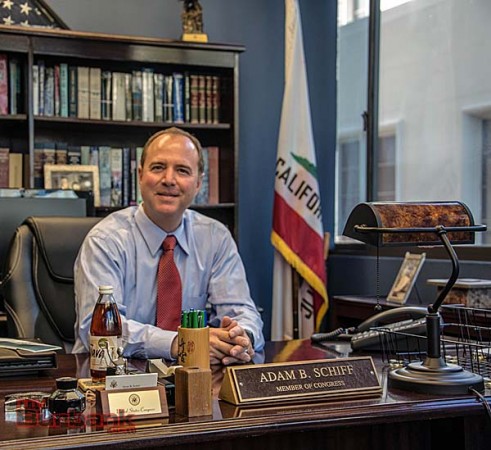 ARPA-E (Advanced Research Projects Agency – Energy)is a very cutting edge agency that brings in some of the brightest scientific talent that are working in the area of energy.  ARPA brings them in for a few years, allows them to see new ideas, and develop new energy technologies.  These are things that are not yet marketable.  They are too far down the line.  They are not the next generation car battery, but perhaps the generation after that.

It’s a very efficient agency (ARPA-E), and is exactly the type R&D investment we need to make.

For whatever reason the majority over the past couple years has tried to destroy ARPA-E.  This year they proposed to cut the fund for ARPA by over 80%, similarly last year they had a mammoth proposed cut to ARPA-E.

I offered an amendment last year on the house floor to overturn those cuts last year.  The amendment was successful and restored, on a bipartisan basis, funds for ARPA-E.  This year we were not successful.  And they are still planning to go forward in the house with massive cuts to ARPA-E.

I think it’s (cuts) driven by a couple things, one is driven by people who are perfectly content to rely on fossil fuels and scoff at new energy or new technologies.  And in part it’s (rejection of proposals) driven by anything the president is for.

He’s for it – ARPA (E) is largely his creation, so then it must be a bad idea.

But I think it is just the kind of investment we ought to make.

myBurbank: How should we approach energy management in Burbank, both at the utility and personal level?

Rep. Schiff: Municipalities are subject to the requirements that they diversify their portfolios (where they purchase or obtain energy).  That they have a certain percentage of renewable energies as part of what they are providing to the cities, and I think that is appropriate.  We need to make sure that it is workable, and that we are not bankrupting the municipal utilities.

Most of the municipalities in our region are embracing the requirement that they have a certain percentage of renewable energy.

Part of the reason we’ve taken the approach requiring a certain renewable portfolio is that it allows them (municipal utilities) to find the most cost-effective way to implement that to the same renewable energy component.

As I said, I think this should be an Apollo-like effort, and that means the government has a role to play, the state government, the federal government, as well as private individuals.

myBurbank: That leads into your efforts regarding climate change.  A lot of people have a lot of different opinions on climate change.  What do Burbank residents need to know about the realities of climate change, and what should we be doing about it?

Rep. Schiff: it is amazing to me we can still have a robust debate about this, because the view of the scientific community is fairly unanimous.  Global warming is real.  It is quite dramatic.  There is a human component to climate change, and that if we reach the tipping point, and go over it, we could have quite disastrous consequences.

There is always a “head in the sand” component within our society.  There are others who would dispute that, but they are very much on the margins of the scientific community.  Because the facts are indisputable.  .

What we don’t know is how much time we have.

Where a lot of the opposition we have in the congress is that some are doubters and say it is not taking place, some who acknowledge it is taking place but are not sure what to do, and others who acknowledge there is a human component and it is happening – but don’t feel the United State should take unilateral action when we can’t persuade China and Russia.

If we can’t persuade China, Russia, India, and other countries then we should bother to take steps ourselves.

I think we need to take a stronger leadership role in that.  Yes we need the rest of the industrialized world and developing world to participate as well, but we are some of the largest energy consumers in the world.  We have an obligation to help lead the change on climate, and if we don’t we can be confident no one will.

I think there are a couple of things people can do (in Burbank).  People can change their own lifestyle habits to reduce their carbon footprint. They can be conscience of what they can do as an individual, and as a community to contribute to reducing carbon emissions.

And then we can let our elected officials know how important this is, help agitate for change, and raise the profile of this issue.  We particularly need that in districts where there are representatives who have not been willing to act, or that are dallying.  It has to be a grassroots national effort to get results.