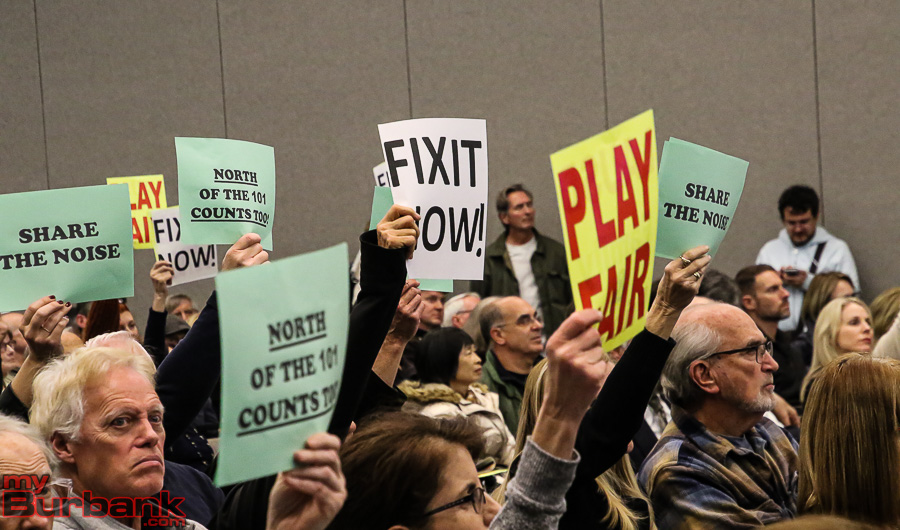 Groups representing Burbank and several southern Valley communities gave presentations and asked questions of the elected officials and FAA representatives. During their presentations suggestions and requests to solve the noise problem were made. Burbank Mayor Sharon Springer and Councilwoman Emily Gabel-Luddy were in attendance.

Quiet Burbank Skies gave a detailed study showing the increase of flights in recent years from Burbank airport. Burbank citizens complained of loud daily jet noise—sometimes as extreme as 80 to 100 decibels—jets flying at low altitudes which increased their noise loudness while passing overhead and noise from flights taking off as late as 3am waking residents. According to the study Burbank airport has not been enforcing its own noise regulations or after curfew take off rules. The last flight allowed to be scheduled at Burbank airport is 10 p.m.

“It’s just noisy all the time,” said Judith Fraser who lives in Laurel Canyon. “We have had noise but not like this. This is really sever. It seems like they are flying lower…more flights and lower.”

Quiet Burbank Skies claimed the extreme jet noise started after the Next Generation Air Transportation System, called NexGen, was implemented in 2017.  NextGen, a satellite-based navigation system was created to make flights safer, quieter, and more efficient. The city of Los Angeles sued the FAA in Dec. 2019 because of plane noise over the San Fernando Valley and the FAA’s lack of action. The suit asks that the FAA return flights to pre-NextGen routes.

Planes taking off at a higher altitude, making their turns over the Valley sooner, Burbank airport imposing fines for violations of noise and after curfew plane take offs and returning to pre-NextGen flight routes were all solutions given by the community groups.

Questions asked to the FAA’s representatives by elected officials and residents were not answered. The agency replied they could not answer questions due to the litigation with Los Angeles. The refusal to provide any information frustrated and angered the meeting’s audience members some of who were holding up signs reading Fix it Now, Play Fair and Liar.

The panel of elected officials and representatives said no action would be considered until the series of task force meetings was finished. The final airport task force meeting will be held Feb. 19 at the Los Angles Marriott Burbank Airport hotel.