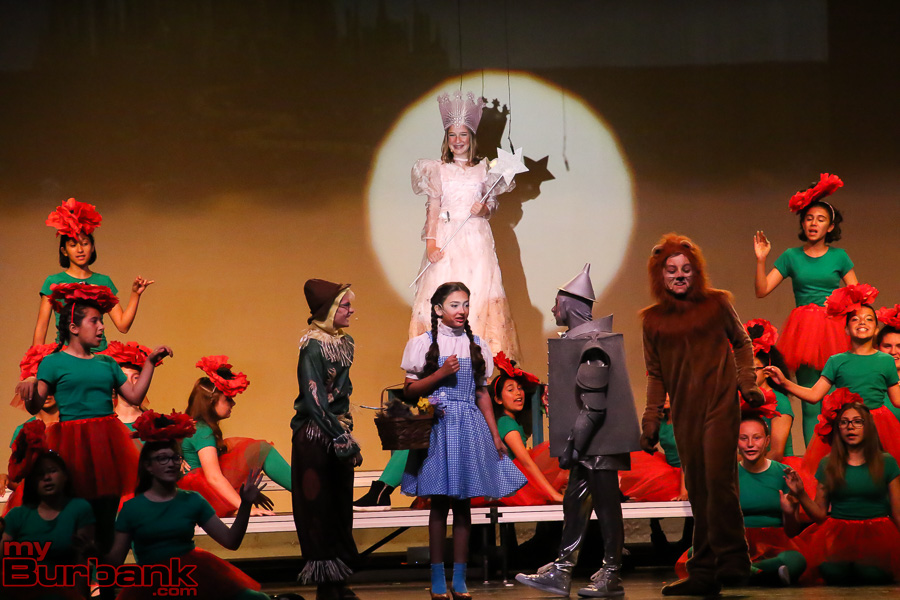 They also loaded the musical with talented performers, many of whom will be able to hit the ground running as they start to participate in Burroughs High School’s nationally acclaimed show choirs and dramatic productions.

The toughest song, Over the Rainbow, came early in the show, slightly ahead of the tornado.  Madeleine Barrera nailed it.  The audience cheered. Barrera’s Dorothy had got them over the rainbow and into Oz.

Other stand out performances included Kaylor Toronto’s Scarecrow, who exhibited intelligence and physical comedy in equal measure; Rhett Hemingway’s fully-realized and exuberant Cowardly Lion; and Sonya Dadekian’s Glinda, who invested her good witch with a serene dignity.  And a shout out to wiseacre Crows Julia Narmore, Maria Stefanie and Savannah Stotts for being laugh-out-loud funny.

Many of the Munchkins (and other ensemble characters) were, well, munchkins. They came from Luther Burbank’s feeder elementary schools of Bret Harte, Edison, Providencia, and Roosevelt.  Five years from now, these youngsters will be tormented by their parents gushing to friends, “Here’s Clarissa when she was eight. Isn’t she just the cutest flying monkey?”

The program for Wizard of Oz is high school quality, as was the sound and lighting.  The students know that the community is taking them seriously.  So they take their work seriously.  No flubbed lines. No wandering attention.  Being professional.

This is no mean feat for elementary and middle school students. The young performers have achieved a solid baseline from which their talent can continue to unfold.  So maybe 15 years from now, Clarissa will be touching a print of her awful flying monkey photo for good luck on the opening night of her first on-Broadway performance.

Wizard of Oz is a great choice for a middle school performance.  The central character, Dorothy, is a tweener who’s learning that her family’s power to protect her has its limits.  Her aunt and uncle can’t shield her from the malice of a woman “who owns half the county” and Dorothy takes their lack of power to be a lack of love.  She runs away, angry and bitter. But then Professor Marvel cleverly draws out Dorothy’s concern for her aunt.  She heads back home, trying to outrace a tornado that can’t be pleaded with.

Dorothy’s knocked unconscious. And the dream journey that follows is one of the great tributes to a young woman’s imagination. Confronted with the chaos that bad people and capricious nature can inflict, does she become like the Wicked Witch of the West or like Glinda? Dorothy’s journey to Oz is a journey within, a journey where she finds her way back home and understands it for the first time.

Performing Wizard of Oz was also an artistic voyage, one that the young cast navigated with brains, heart and more than a little courage. Bravo.