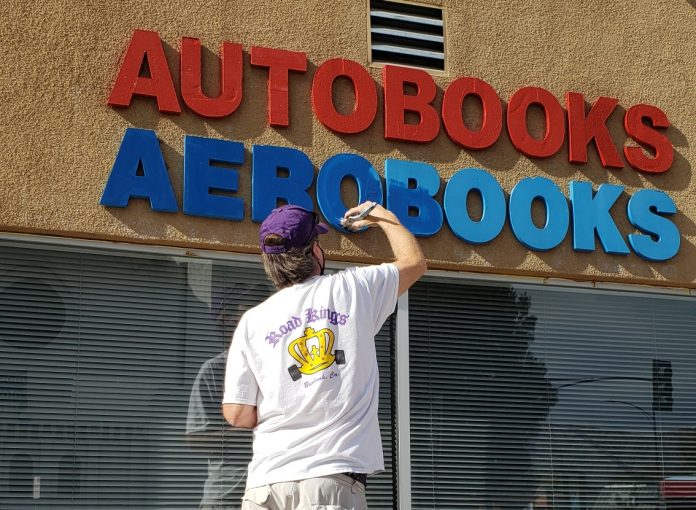 Written by Don Baldaseroni to share with the myBurbank readers:

The story behind the store…… Road King member, Don Siglar went to the AutoBook’s store about 6 months ago and noticed how shabby the outdoor signage on the building was.

Don Siglar mentioned the problem to me, so I knew we had to help the owner out and clean up the sign.

I spoke to another Road King member and retired painter, Gary Arellano, and our President, Bruce Borst about repainting the sign. The AutoBook store has been a staple in Burbank and supporters of the Road King’s for years and after a meeting of the minds called Tina (owner) to see if she would be interested in letting the club do a little painting.

Tina was thrilled and said she would appreciate it.

Gary and I went to the store and pulled one of the letters down to discover it was so badly worn it could not be saved. Gary is a real go-getter and found someone to make the letters in his shop. Once completed, the letters needed a new paint job. So not to be outdone, our President, Bruce Borsh took the letters to his paint department for a fresh coat of Curb Red paint.

So this past Sunday, November 1st. the few members met at Auto Book Store and pulled the old letters down from the front of the building, installing the new letters for Tina, and just in time, it seems, as Jay Leno’s show was going to be filmed there on November 3rd.

Many thanks to Bruce, Gary & Karen, John, Marion, Eddie, and of course Don Siglar, along with Chuck our club’s photographer, even though he showed up late.

I believe this to be a good example of community support and teamwork. If anyone has thought of an act of community involvement please send me a text, email, or just call me and I will see what we can do.