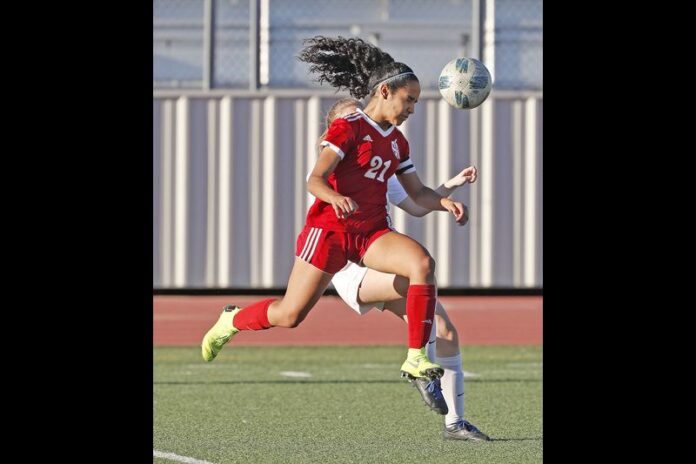 A few years down the road some members of the Burroughs High girls’ soccer team might turn on their television sets or computers and watch an international soccer match featuring Ally Lemos and remember how she helped end their season and for some, their high school careers.

Lemos led top-ranked San Dimas to a 4-0 win over Burroughs Tuesday in the CIF Southern Section Division 4 quarterfinals at Memorial Field. Burroughs had never reached the quarterfinals of the CIF playoffs before.

Lemos is a junior and is playing high school soccer for the first and only season. She will be an early graduate of the class of 2022 and start playing for the UCLA Bruins the day she sets foot on campus.

A midfielder who didn’t even put much of an effort to get involved with the attack scored three times against the Bears.

“I think we held her off but she can really solidify the set pieces. I think that might have been what discouraged us a little bit,” Burroughs defender Jesse Virtue said. “We talked before the game that she’s good on set pieces, but I think we underestimated that.”

Burroughs came out and looked sharp the first almost halfway through the first half, holding its own against a team that has not even tied a game, let alone lost one.

But then Lemos, who has 40 goals on the season, worked her magic.

In the 19th minute, she deliberately curled a corner kick into the goal past Burroughs goalie Kaylin Casper.

The goal appeared to have left everyone else on the pitch stunned that someone was capable of such a feat.

San Dimas (16-0) added a second goal in the 28th minute that came as a result of a Burroughs turnover from a goal kick.

Shortly before halftime, San Dimas was awarded a free kick following a Burroughs handball. From 25 yards out, Lemos curled the kick over the Burroughs wall, hitting the left post before going in.

“Honestly it comes down to reading the game and seeing what they have, what the score is, how much time is left, knowing what I have on my end,” Lemos said of her approach.

Playing without coach Brady Riggs who had another commitment, Burroughs (7-4-2) still played well at times and had its chances in the first half.

Lily Gonzalez was able to partially block a re-start by San Dimas goalie Maddy Morris, who had been passed the ball by one of her defenders. Unfortunately Gonzalez was unable to get enough of the ball to force it into the back of the net.

The Bears had a chance to get right back in the match in the opening seconds of the second half as Gonzalez had a break away opportunity, but shot wide of the goal.

Gonzalez also earned a corner kick in the 48th minute as her left-footed shot forced Morris to make a fine save.

Lemos gave San Dimas a 4-0 lead in the 58th minute as she took a ball that was cleared and dribbled along the right side of the goal box, placing it perfectly in the left corner of the goal.

Burroughs continued to fight as Gonzalez hit the post on another breakaway opportunity in the 60th minute.

Virtue said she was proud of her team for a fine season.

“We’ve all been together for a long time. The season started a little rocky because some of us had club so we weren’t all there. But I think it was the Arcadia game that was our first game together and we hadn’t even had a practice all together,” she said. “I think we made the most of it.”