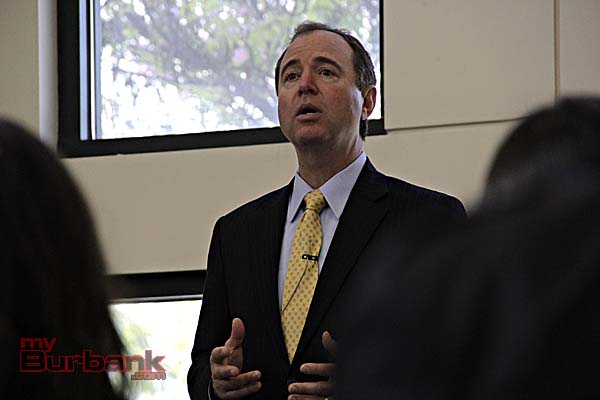 Rep. Adam Schiff (D-CA), who helped last year to secure $8.2 million in the FY 2016 funding bill specifically designated for a West Coast Earthquake Early Warning System and $5 million the previous year, released the following statement before the start of the White House Earthquake Resilience Summit which he will participate in:

“The West Coast is due for another earthquake, and the question is not if, but when, the next big one will hit,” said Schiff. “When it does, it will undoubtedly cause significant damage to homes, businesses and infrastructure, cause injuries, and potentially result in fatalities. We have the real opportunity to mitigate that damage and save lives if we act now on an early warning system. We have had significant success over the past few years in Congress funding the effort to fully build out a West Coast Early Warning System, but the federal government cannot – and will not – fund the system in its entirety.  And so I am very pleased that the private sector is getting involved and lending their support, as many companies based on the West Coast will benefit tremendously by the implementation of an early warning system. We are also hearing encouraging words of support from the affected states which I hope will soon be followed by more concrete pledges of financial assistance.”

Below is the White House fact sheet about the U.S. government’s executive action and increased state government and private sector support:

The Obama Administration remains committed to improving the resilience of our communities, States, and the Nation to important hazards, such as earthquakes. A 2015 scientific assessment from the U.S. Geological Survey shows that more than 143 million Americans in the continental United States could experience potentially damaging earthquakes. This estimate is nearly double the previous 2006 estimate because populations have grown in earthquake-prone areas and there are now better methods for estimating earthquake risks. Improving warning systems, better building protections, and informed citizens can help mitigate losses, injuries, and deaths, and also can help communities recover faster.

Today, the White House is hosting an Earthquake Resilience Summit to highlight how a whole-community approach—including scientists, engineers, public officials, nonprofit entities, and private companies—is the best approach for improving resilience to earthquakes and other hazards; and to explore how science and technology can improve our ability to detect and respond to earthquakes in the future.

At the summit, the Administration and stakeholders will announce new commitments toward a future with greater earthquake safety based on next-generation approaches to earthquake-resilient building and warning technologies, including:

President Obama today signed an Executive Order: Establishing a Federal Earthquake Risk Management Standard, which will improve the capability of federal buildings to function after an earthquake, reducing risks to people, lowering post-quake recovery costs, and making it easier for communities to recover swiftly. The Executive Order requires that Federal agencies responsible for the design and construction of a new building, or an alteration to an existing building, ensure that the building is constructed or altered using the earthquake-resistant design provisions in the most current building codes. The latest building codes, which encompass the current understanding of the earthquake hazard potential, are one of the best ways to achieve earthquake safety and preserve the lives of the people who live in a building. This Executive Order will also help ensure that federal assets are available to support recovery efforts.