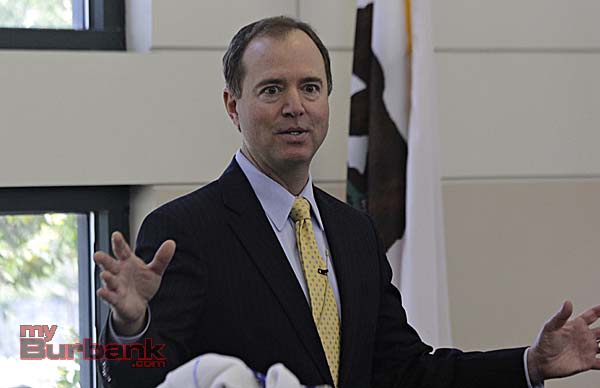 Rep. Adam Schiff (D-Burbank) announced that he is circulating a letter among his colleagues addressed to the Nobel Committee to nominate Pope Francis as the 2016 Nobel Peace Prize Laureate.  The letter, which will be distributed to both Democratic and Republican Members of Congress before His Holiness’ address to Congress on Thursday, highlights the Pope’s commitment to peace, his leadership in taking on the challenges facing our planet, and his courageous stand for human rights, his pleas on behalf of refugees, and his condemnation of all genocides.

The full letter began circulating today, and is below:

As Members of the United States Congress and supporters of the historic mission of the Nobel Foundation, we write to nominate Pope Francis as the 2016 Nobel Peace Prize Laureate. With unsurpassed eloquence, humility and compassion, the Pope has used his pulpit to exhort people and nations around the world to conduct their affairs with spirituality, morality and integrity. Pope Francis is an articulate and effective voice for fundamental human rights and is highly deserving of recognition by the Nobel Committee.

Pope Francis has been a powerful advocate for peace, urging an end to conflict and support for constitutive ties among nations. He has called on the world to use diplomacy and discussion to solve disputes, rather than military force, coercion or intimidation. This commitment to nonviolence, which the Pope has put into practice every day through his words and actions, is at the core of the principles behind the Nobel Peace Prize.

Pope Francis has also worked to galvanize the international community to take on global problems, such as the changing climate and environmental degradation. Pope Francis has brought together at the Vatican policy makers from around the world to build support and consensus around the need for a global response to the challenges facing our planet. Through his stature as a spiritual figure, Pope Francis casts the issue of an unhealthy earth in religious terms, emphasizing our joint duty to care for the world and to pass on an unspoiled environment to future generations.

Finally, Pope Francis has distinguished himself through his courageous stand for human rights and his condemnations of all genocide, both past and present. Most recently, in condemning the persecution of Christians and other minorities in Syria and Iraq, the Pope has spoken out against the darkest chapters of human history made possible “by general and collective indifference.”

As the world struggles to cope with a flood of refugees not seen since the end of World War II, the Pope has emerged as perhaps the leading advocate for relief. The Pontiff has called on the international community to respond meaningfully to this unsurpassed humanitarian disaster. His compassion has also taken the concrete form of inviting a Syrian refugee family to reside in his residence at the Vatican.

For all these reasons and many more, we thank you for your consideration of our nomination of Pope Francis for the Nobel Peace Prize. The receipt of such an award would be a profound recognition of the Pope’s commitment to furthering the cause of peace around the world.