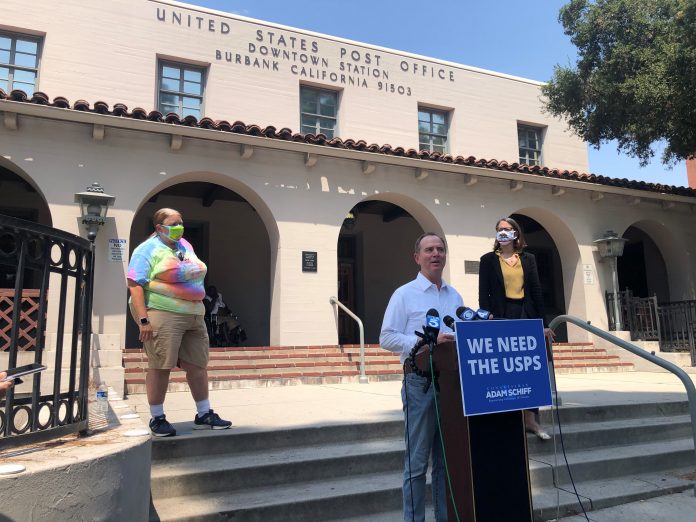 “At this moment, we’re seeing a fierce and deliberate attack on the Postal Service from the President of the United States and his Postmaster General, Louis DeJoy. The Postmaster General has ordered sweeping new restrictions limiting overtime, removing sorting machines, and removing collection boxes that are resulting in far worse service for Americans, sometimes disastrously so,” Rep. Schiff said in his remarks. “Just this afternoon, DeJoy announced he is suspending these initiatives until after the election – a direct result of the public pressure. This is welcome news, and shows that public activism and Congressional oversight work, even when Trump and his lackeys are shameless. But we have a ways to go, because these policies need to be reversed, not just suspended.”

Schiff shared stories from constituents, including veterans and small business owners, who have been negatively impacted by mail delivery delays. Schiff’s office has recently received over 4,000 emails and calls about the USPS.

Schiff’s full remarks as prepared are below:

Good afternoon, thank you for joining us today, and for braving the heat to talk about an issue that’s of vital importance, protecting the United States Postal Service and protecting the right to vote.

The United States Postal Service is a public good, a public service. Every day, almost every household in America uses the mail. They send and receive packages. They get prescription drugs that they need for their health. And beginning in just a few weeks, more Americans than ever before are going to use the mail to vote safely and securely in the midst of the worst pandemic in more than 100 years.

Yet at this moment, we’re also seeing a fierce and deliberate attack on the Postal Service from the President of the United States and his Postmaster General, Louis DeJoy. The Postmaster General has ordered sweeping new restrictions limiting overtime, removing sorting machines, and removing collection boxes that are resulting in far worse service for Americans, sometimes disastrously so.

Just this afternoon, DeJoy announced he is suspending these initiatives until after the election – a direct result of the public pressure. This is welcome news, and shows that public activism and Congressional oversight work, even when Trump and his lackeys are shameless. But we have a ways to go, because these policies need to be reversed, not just suspended.

And there are still questions and concerns about the service and accessibility for residents and business owners. And millions of Americans – right here in Los Angeles and around the country –  are suffering as a result of the breakdown of the Post Office and as a direct result of the measures that Trump’s Postmaster General has deliberately put in place.

But let’s be clear, the attacks on the United States Postal Service are nothing new. For years, there have been those in the Republican Party who have called for the Postal Service to be run like a business, seemingly unaware or uncaring that running it like a business would mean higher prices for Americans and reduced or zero service for others, especially those in rural America.

We have a message for the Postmaster General, for Republicans in Congress, and for the President: Americans need the Postal Service to work. Over the last couple of weeks, I’ve received more than 4,000 emails and calls about the USPS. I want to just share a couple of those.

One constituent, Tyler in Hollywood, wrote me:

My medications have been “stuck” in the USPS system for a month now. I’m not asking for your help, as claims have been filed with both Kaiser and the Postal Service. However if it wasn’t for my emergency stash of HIV meds and antidepressants I don’t know where I’d be. This slowdown of the postal service cannot continue…Please keep working as hard as you can to fix this and get the benefits we need to survive this pandemic.

I am a small business owner who relies 100% on USPS to deliver products to my customers. Utilizing a private carrier isn’t cost effective for my lightweight products. The delays started with COVID in April but in the last few weeks have noticeably and catastrophically slowed down. I personally have 7 incoming packages that are stuck “In Transit” for weeks.

My business packages going to customers are getting stuck as well, costing me more money out of pocket to replace or refund the items, resulting in profit loss.

And still another, a veteran named Andy, left me a message that said:

Last Thursday at the West LA VA, I spoke with veterans who had to drive miles to pick up meds at the pharmacy because they have been waiting up to 3 weeks getting medications by mail after they ordered them. It is usually set up to wait up to 10 days. But most times we would get them within 5 days.

I could go on and on. We have veterans and seniors who are waiting weeks for medications like insulin that they need to simply stay alive, and for Americans who live in rural areas or are homebound, they literally have no other options.

The House is not going to let this stand. We will act with the urgency this moment requires.

Back in May the House passed $25 billion for the Postal Service to offset the reductions in revenues from the Coronavirus pandemic and help allow millions to vote by mail. Mitch McConnell has left our bill in his legislative graveyard ever since.

On Saturday, we will be returning to Washington to pass the Deliver for America Act, legislation that will require that the services provided by the Postal Service be returned to what they were in January.

No more cuts to overtime that reduce the ability to deliver mail. No more removal of sorting machines. No more reduction in collection boxes. No more sabotage by Trump and his Postmaster General.

That’s what needs to happen in the midst of this pandemic, in the weeks before the election.

And we’re going to get answers as well. On Monday, the Postmaster General will testify before the Committee on Oversight and Reform. We are going to ensure we get the truth for the American people, and we’re going to demand accountability, and I think it should start with the resignation of the Posdtmaster General, Louis DeJoy, who is heavily conflicted by his ownership of private shipping stocks and who auditioned for the job as a mega-donor to Donald Trump.

And we are going to put pressure on McConnell and Republican Senators to finally act and pass the badly needed funding for the Postal Service. We’re willing to compromise within reason and what the USPS needs, but are Republicans willing to even come to the table?

For Americans worried about what the attack on the Postal Service means for their right to vote, you’re right to be concerned. The president has made explicit his intention to degrade the Post Office because he thinks it will help him get reelected. It’s outrageous, it’s sabotage, and it’s an attack on our democratic process.

But you should know that you can make sure it won’t work. You can defeat their plans by voting early in person, or if you’re voting by mail, make sure you request your ballot early and return it early. There’s no reason to wait.

I’m pleased to be joined this morning by several retired letter carriers who I know are eager to share the benefit of the years they spent delivering the mail. They know the ethos of the Post Office and its employees, 40 percent of whom are veterans, and the service they strive to provide. And they know just how wrong it is.