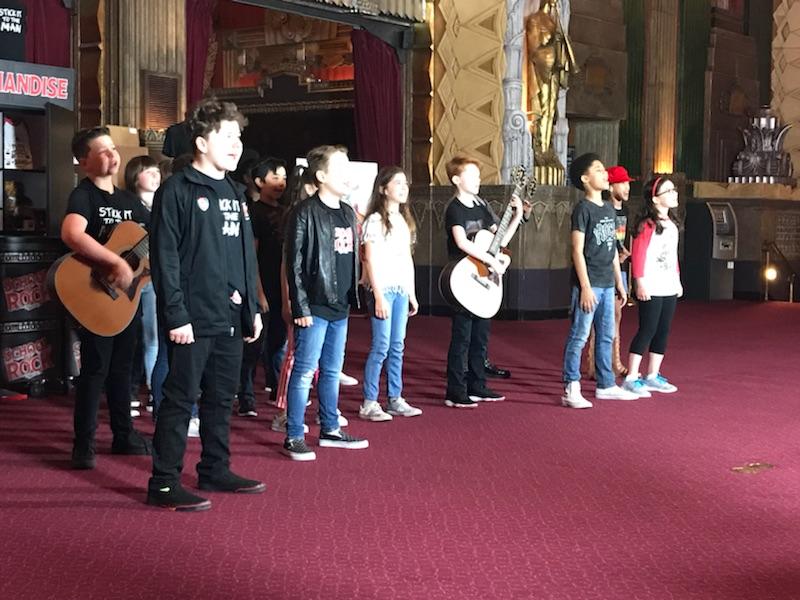 Just before the show an announcer says, “We’ve been asked if the kids really play their instruments. Yes they do.”  Do they ever! Welcome to musical theater’s first-ever kids’ live rock band. These real-deal young performers, aged nine to 12, make School of Rock-the Musical delightfully meta.  They were also impressive doing close-up performances in the Pantage’s lobby earlier this week.

The school bench is deep with talent.  Young cast member Huxley Westemeier (Billy, u/s Lawrence,) to give just one example, began studying classic piano at five, and then discovered rock. He’s never looked back. Now 10, Westemeier’s using a MIDI controller (“you can layer together separate hands”) to compose music intended for the Broadway stage. 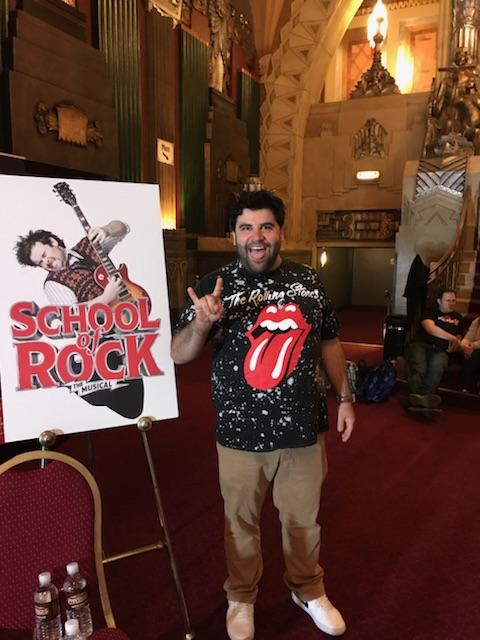 Fans of the movie version will find that Rob Colletti channels Jack Black’s comic, chaotic energy and amps it up for the live stage, becoming the teacher we wished we had…well, at least once. “It’s all about the kids,” says Colletti, and that mantra infuses his character throughout the musical. By the time the class of helicoptered prep school students transforms into a full-on rock band, School of Rock becomes, in the words of co-star Lexie Dorsett Sharp, “a rock concert.”

A quick memory refresher about the story’s set up:

We open with guitarist and wannabe rock star Dewey (played by Rob Colletti) mistaking his stage hogging for talent, to the dismay of the band he founded, “No Vacancy.” True to their label, the band members already have a new guitarist on board when they kick Dewey out.  They’re not about to let him ruin their chances at fame and fortune in the upcoming Battle of the Bands, only weeks away.

So, we have a discouraged Dewey waking up in the apartment of his buddy-since-high-school Ned Schneebly (Matt Bittner.) At the urging of his exasperated girlfriend Patty Di Marco (Emily Borromeo,) Ned tells Dewey he must make up for his share of the rent or move out.  Soon after, Dewey answers a phone call, thinking it may be a buyer for the stuff he’s having to sell for quick cash. 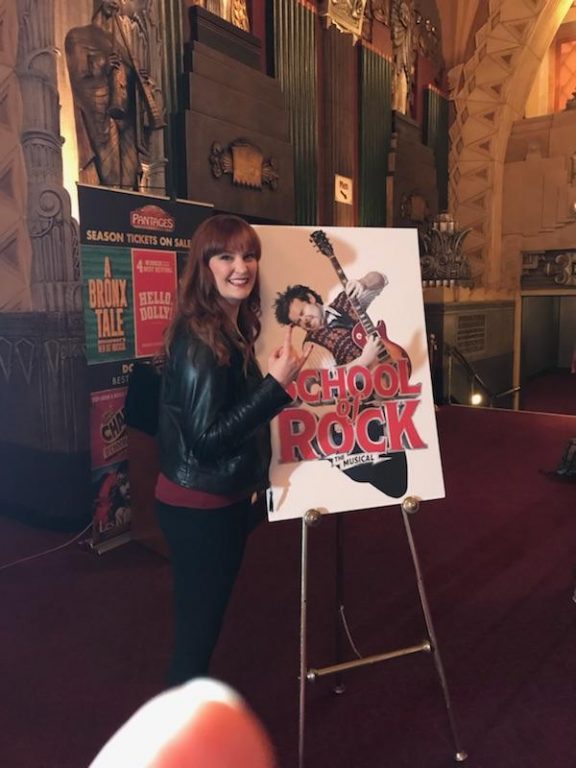 But the fateful call turns out to be from Rosalie Mullins (Lexie Dorsett Sharp,) the principal of the Horace Green (very expensive green) prep school inquiring for Ned about a short-term position as a substitute teacher. Desperate for money, Dewey impersonates Ned and is hired to oversee a fourth grade class of hemmed-in students. When Dewey overhears a music class, inspiration strikes. He’s going to turn his overscheduled charges into a rock band that will enable him to take the upcoming Battle of the Bands by storm (and give the horns to his old band members.)

But he’s going to need the cooperation of a very tightly wound Principal Mullins.

And so the fun and magic kicks in to high gear.  “Dewey let’s us do what we want to do,” says Alyssa Emily Marvin (Marcy.)  “He brings out our true selves.”   “More ‘loosey goosey’,” adds Westemeier.

Colletti agrees that Dewey is on a journey to get his alpha back after being ejected from No Vacancy and hitting “rock bottom.”  “He’s not going to be a rock star,” says Colletti before quoting an apt line from Ned, but Dewey will find that he can ignite the starfire in others.  The turning point comes when Dewey realizes “that Zack was the better songwriter”, and uses Zack’s song instead of his own at the Battle of the Bands.

“Where did my inner child go?” asks Sharp, crystallizing the angst of her Principal Rosalie character.  Under Dewey’s influence, she begins to find it, after “her character warms up to Dewey in the bar scene of Act II.”  Off-stage, she “tries to be a role model offering kindness and respect” to the 16 youngsters in the cast, who are accompanied by “guardians, mentors and ‘child wranglers’.”  (As in, “where did my outer child go?”) 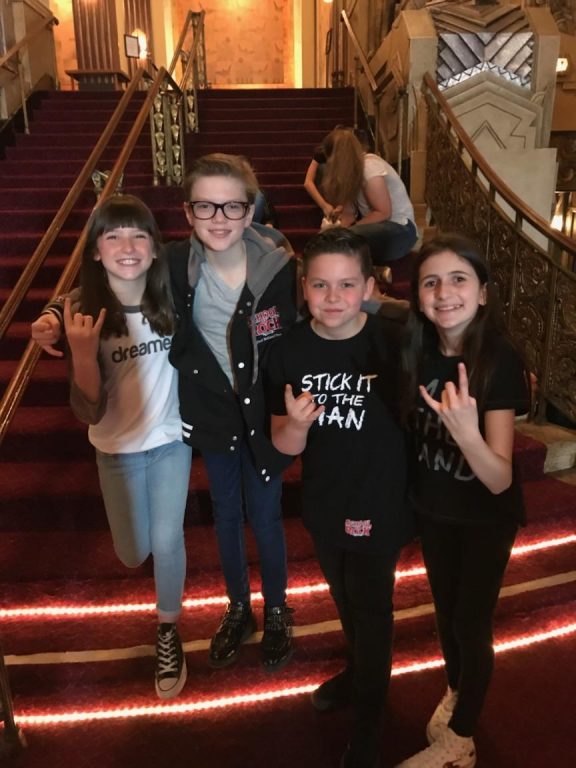 The kids have a demanding schedule that might make the fictional Horace Green prep school seem like easy duty in comparison. Marvin tries to memorize “all the hotels and floors where they stayed,” which includes Minneapolis, Chicago and Detroit.  But it seems that memorizing lines can be enough of a challenge. For example, swing actor Jack Suarez Kimmel (u/s Zack, Freddy, Mason, Billy) has to be prepared to inhabit any of several characters on short notice, as illness and other manifestations of Murphy’s Law has its wicked way with the cast.  “When you’re saying the wrong character’s lines, we call it ‘swing brain’,” remarks Kimmel.

“I’m the girl with the dreadlocks who warms up the audience and gets them energized,” announces Olivia Bucknor (Shonelle, u/s Tomika,) who’s been singing and dancing since she was two.  When asked for words of encouragement to kids just starting to sing or play an instrument Bucknor says, “Always keep trying, no matter how much you mess up.  Practice makes perfect.”  “Perfect practice makes perfect,” chimes in Carson Hodges (Mason, u/s Lawrence,) who plays keyboard and guitar. 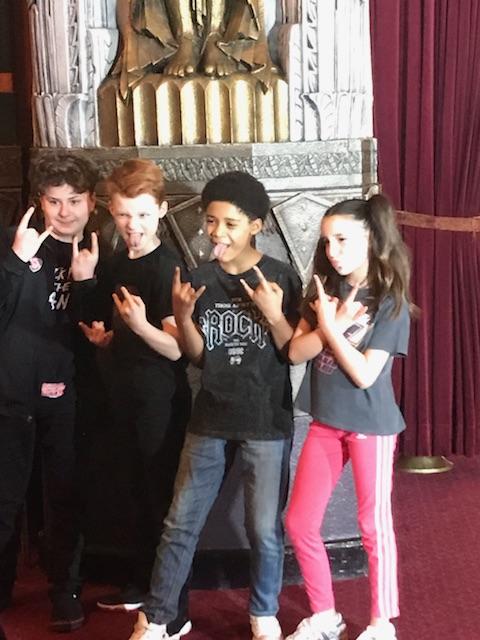 Make that deliberate practice, in which you’re constantly putting yourself on the bleeding edge of mastery, rather than comfortably retreating to things you already do well.  It’s estimated that 10,000 hours of deliberate practice moves one from novice to master.  The child actors in School of Rock have a huge start on that 10,000-hour journey, and it really shows in their work.

As discussed in Cal Newport’s seminal book, So Good They Can’t Ignore You, talent doesn’t just spring forth from Zeus’ brow like Athena; it’s cultivated by deliberate practice. That was true even in the case of Mozart. (The book’s title comes from when Steve Martin was asked about the secret of succeeding in show business. He replied, “Be so good they can’t ignore you.”)  Appropos of School of Rock, Newport relates how he and his friend both played the guitar but at some point Newport was content to remain at a basic level while his friend kept challenging himself, eventually becoming a master guitarist.  One can imagine Dewey becoming good enough for some local, garage band acclaim, but not willing to do the work to take his guitar skill to the next level.  Fortunately for him, he was developing his ability to persuade other people to take a leap and make music; doing that with fourth graders instead of peers was taking that skill to the next level.

At the show’s finale, the initially-outraged parents are thrilled to see the musical level of excellence of their sons and daughters and all is forgiven. As Colletti observes, “they come to realize that there is more than one way for their child to succeed” than following a rigid route. Dewey gets to be an after-hours music coach at Horace Green, his “loosey goosey” now harmonizing with the school’s more structured academics.  A newfound balance arrives for both Dewey and Rosalie, setting the stage for something more than a beautiful friendship between them. 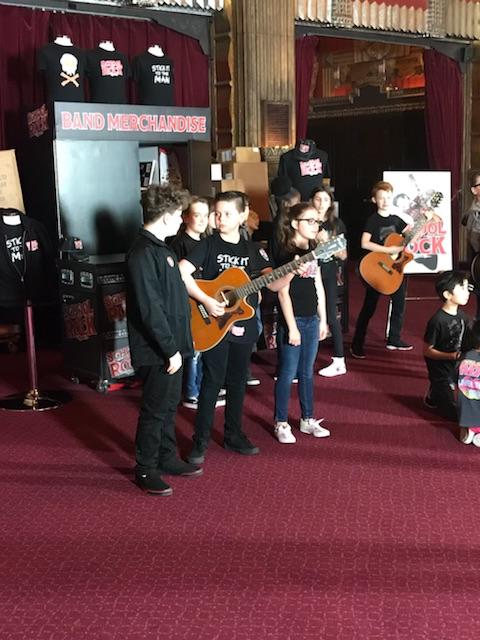 After watching the School of Rock movie with her children back in 2006, Executive producer Madeleine Lloyd Webber went after the stage rights, finally landing them in 2012.  As Playbill notes, “She fell in love with the film, finding it hilarious, charming and, above all, very touching. The film’s celebration of the transforming power of music on young people was very close to her heart.”  The rest, as they say, is history.  Her husband and legendary composer Andrew Lloyd Webber brought the story to the London stage (with all the original songs from the movie as well as 14 new songs) to widespread acclaim and rave reviews.  In addition to being nominated for four Tony Awards in 2016, School of Rock – The Musical also won the 2017 Oliver award for Outstanding Achievement in Music.

The Webbers’ encouragement occurs off stage as well. The Andrew Lloyd Webber Program promises every child an entitlement to study a musical instrument on entry to school as well as tuition and the opportunity to play and perform as part of an ensemble or orchestra groups. In 2016, the Andrew Lloyd Weber Foundation endowed the American Theatre Wing with a $1.3 million, three-year grant to support theater education opportunities for under-served young people and public schools across the U.S.

Burbank public schools exemplify the opposite end of the spectrum, where the community—much like the parents at the end of School of Rock—rally around the children and make sure there is room for the arts. Recently the Burbank Arts For All Foundation has partnered with BUSD to support BUSD’s school year-long “Music Is Instrumental” campaign to repair or replace musical instruments in Burbank’s middle and high schools. “Music is Instrumental” has garnered wide community support, and is just one of many grants and programs in support of the arts.

In School of Rock, Zack sings, “I have so much to say if only you listen…”  Burbank is listening.

SCHOOL OF ROCK-THE MUSICAL is at the HOLLYWOOD PANTAGES THEATRE through May 27
6233 Hollywood Blvd, Los Angeles, CA 90028

Tuesday to Friday at 8 p.m.

No evening performance on Sun 5/27

Children under 5 will not be admitted to the theatre.

All patrons must have a ticket, regardless of age.

Tickets for SCHOOL OF ROCK are now on sale, and available at www.HollywoodPantages.com/LoveNeverDies and www.Ticketmaster.com, by phone at (800) 982-2787 or in person at the Hollywood Pantages Theatre Box Office (Opens Daily at 10am PT).

School of Rock will also play a two-week engagement in Costa Mesa at Segerstrom Center for the Arts (July 24 – August 5).