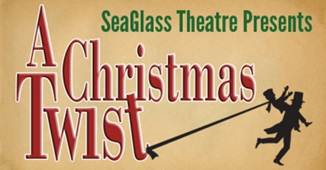 An unusual blend of Charles Dickens’ Oliver Twist and A Christmas Carol, this play parodies and yet still honors the two great stories, while peppering in perfectly placed modern jokes that even the most hip, technologically advanced tween will get.

This comedic gem is highly entertaining, cleverly written and extremely well-acted.  Every word of the play has a purpose.  It’s perfect!   Writers Doug Armstrong, Keith Cooper and Maureen Morley creatively bring the 17th century characters to life in this funny, whimsical and non-traditional adventure.

Tiny Twist, is ironically played by not-so-tiny, David Reynolds as he opens the play by delivering the legendary line, “May I have some more?”  The sold out audience’s response to this creatively altered character and Reynolds’ dedicated delivery of his lines kicks off the play’s tempo seamlessly.

Even though the play is set to stir up laughs, it still sends the message a la Ebenezer Scrooge, played by the very talented, Lauren McCormack, that karma is well enforced in the world as told through three unconventional, funny, and somewhat ethical, ghosts played flawlessly by Kimberly Van Luin, Alison Blanchard and Chris Wynne.  We even have a visit from the notable Ghost of Marley, played by David G. Peryam whose rich baritone voice rivals that of Mr. James Earl Jones.

While the audience joins Twist and Ebenezer on their well-known and beloved journeys, characters from both plays intertwine throughout the evening as we cheer on Twist and marinate in the impending doom of Scrooge (if he doesn’t change his ways).  Ebenezer’s main target, Bob Crachit comes to life as the ever-endearing protagonist and is played effortless by Warren Davis.

Lest we forget the infamous pickpockets that influence poor Twist, played by the adorable and funny, Jen Ray (from ABC’s The Middle) and the hilarious Chris Wynne.  The cast plays different characters throughout this contemporary and spirited homage to Dickens.  Random yet, purposefully placed and beloved characters from our childhoods (belonging to other authors) also find their way into the world of Dickens.  (NO SPOILERS HERE)

Paul Stroili plays Bumble, the nephew to our antagonist, Scrooge.  Stroili, who’s comedic timing not only shines through his character, but through his strong directing abilities as he has orchestrated this talented group of actors so well, that the play keeps the audience engaged until the final bow.

A Christmas Twist is playing now until December 16, 2012 at the Victory Theatre Center in Burbank.

$10 discount on tickets at all performances from November 16 – 25.  Just go to www.seaglasstheatre.org and use the following code when ordering their tickets:  Twisted1025