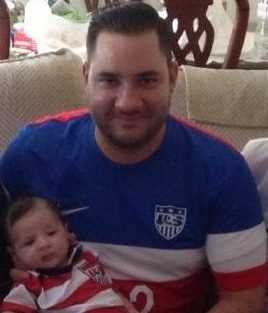 Being glued to a television set for a month every four years for the FIFA World Cup is something lifelong Burbank resident and local realtor Daniel Madariaga has done his entire life.

Madariaga, along with his brothers Claudio, Giancarlo and father Nino, live drink, eat and sleep soccer.

But this summer will be much different. For once, they will have nobody to cheer for.

The Madariagas have made a tradition of cheering for the United States, along with Chile, Nino’s birth nation and Italy, the birth nation of their late mother, Maria.

But then the unthinkable happened. On October 10, the United States was stunned on the last CONCACAF (Confederation of North, Central American and Caribbean Association Football) qualifier last October by Trinidad and Tobago.

If that wasn’t enough, on the same day Chile went from being what appeared to be on safe ground to not qualifying following a 3-0 loss to Brazil as well as a number of other unexpected scenarios. In the end, Chile ended up tied with Peru on points for fifth in South America,  but had a goal differential that was that not as favorable as the Peruvians.

This was the same U.S. team that easily won the CONCACAF qualification group for the 2014 World Cup.

“I remember it was almost impossible for the U.S. to get knocked out. All they had to do was tie or defeat a team that was last place in the group and had been playing terribly,” Madariaga said of Trinidad and Tobago. “As I watched the game, and time was running out on the U.S., I was shocked, angry, and disappointed all at the same time. We did pretty well in the last World Cup, and now we will not even be participating this time?”

While he was focusing on the U.S. game, his dad was also keeping up on Chile, the defending South American champions.  This was also the same Chilean squad that defeated Mexico 7-0 at Levi Stadium in Santa Clara in 2016 to eliminate the Mexicans from Copa America, a game that the Madariagas drove up to see.

“At first I thought he was kidding. I thought he was just upset that they lost their last game,” Madariaga said when he learned of Chile’s fate through his father. “But sadly, they too were out. How could they just come off a major tournament win and have some of the best players in the world and be completely out of the tournament? This was not only a disappointment for me and my family but also for the world. The world wanted to see Chile in the tournament. Everyone loves their attack-first mentality and the excitement they bring. It’s a shame.”

The nightmare for Madariaga wasn’t over.  Italy did not secure automatic qualification after finishing second to Spain in group play.

But it moved on to a playoff against Sweden, which it lost 1-0 over the course of two games in November.

It was the first time since 1954 that Italy, a four –time winner of the World Cup, had failed to qualify.

“As soon as I heard Italy was out, my first thought was that something shady must be going on. It’s impossible that another soccer powerhouse had been eliminated,” said Madariaga, who works for his family-owned Contempo Realtors on Alameda Ave. “Maybe there was another FIFA corruption scandal taking place before our eyes, and Italy was caught up in it. There was no way they could actually be eliminated.”

One thing that disappoints Madariaga is that he won’t be able to show his enthusiasm for the event with his young son Leonardo.

“Seeing my enthusiasm for this World Cup would have propelled him into these next four years of very important soccer development,” he said. “Now we will have to wait four more years to show him the true love we have for our countries and teams.”

Seemingly out of luck, Madariaga has found a team to cheer for through his wife Julia.

“My wife is part Peruvian, so I guess that will be my team this year,” he said.

If anyone is winning out on Daniel Madariaga’s bad luck with the 2018 World Cup it might his clients as he will have more time to show properties and giving tips to those selling them homes, as he has created a series of videos on Youtube that he posts to his social media accounts. including  Twitter and Instagram.