She was raised in Hollywood and is an alumna of the Villa Cabrini Academy, which is now Woodbury University. 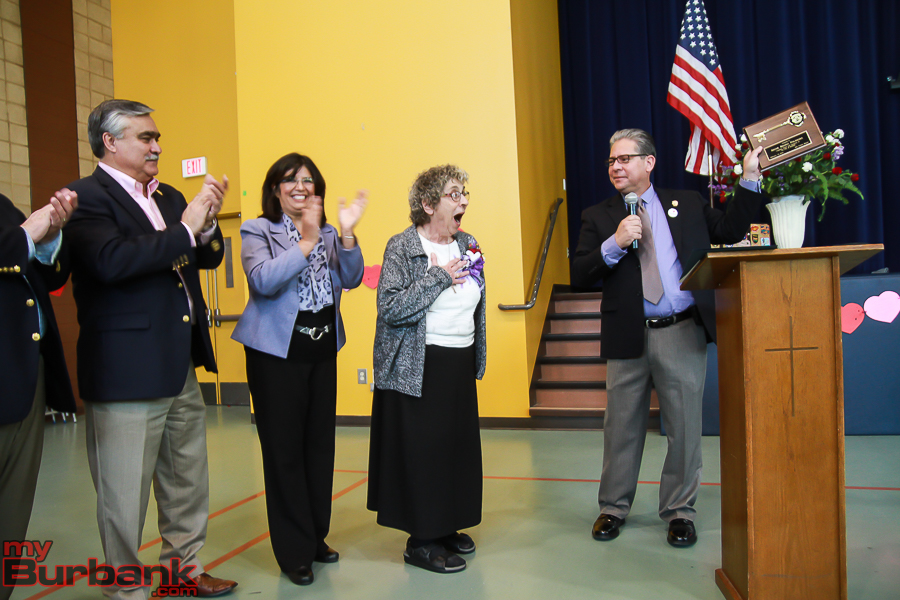 Since 1956 she has been a member of the Missionary Sisters of the Sacred Heart of Jesus, also known as the Cabrini Sisters, founded by St. Francis Xavier Cabrini, the first American citizen to be canonized by the Vatican as a saint. 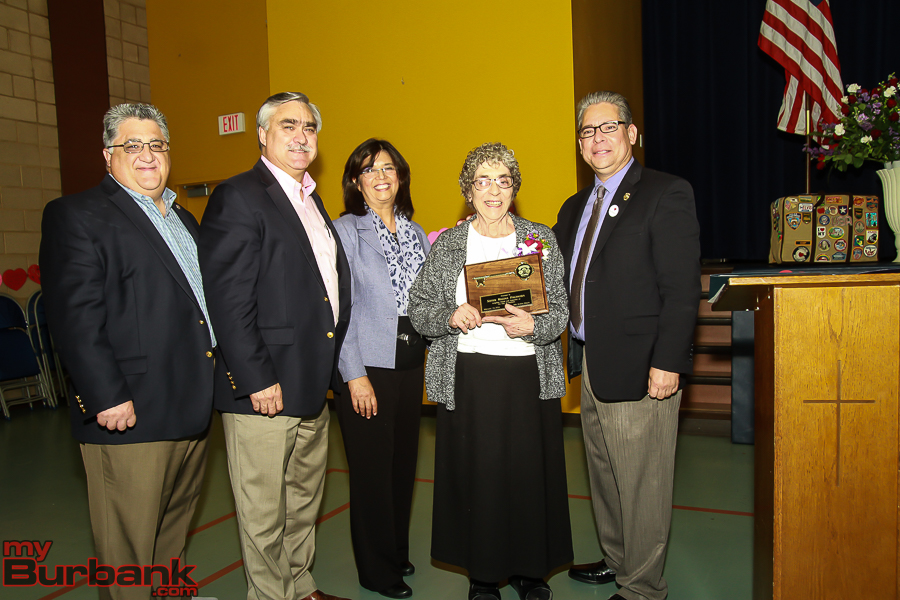 Last Sunday, more than 700 people gathered for her Diamond Jubilee celebration at St. Finbar Church. “Companions on the Journey” was her theme, and was appropriate given the number of people attending.

It was truly a community event, Ramos said, because many people attending were not parish members and others were not Catholic. 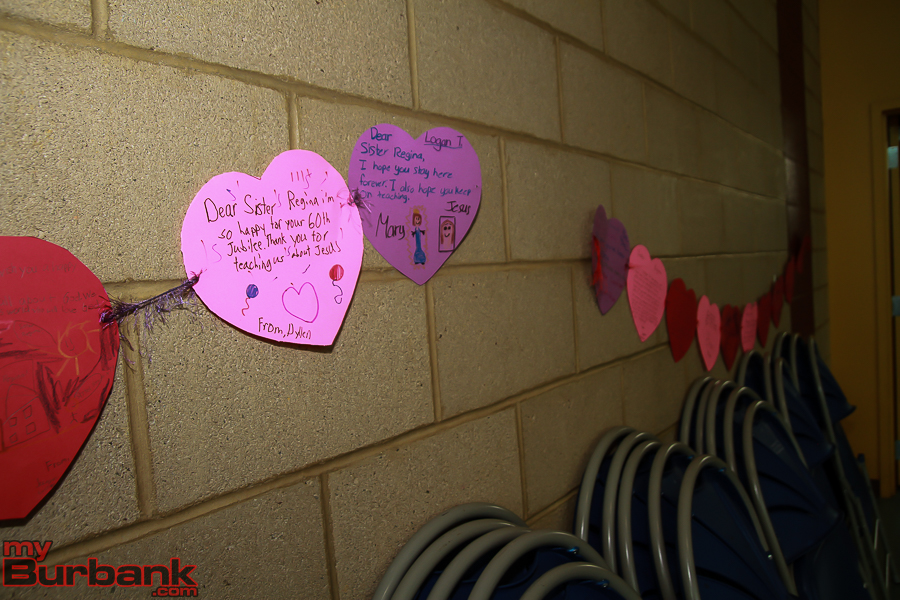 “She got the biggest Valentine card I have ever seen,” Ramos added. “It was a giant string of hearts each with a message from every child at the St. Finbar School. It was simply beautiful!”

Ramos first met Sister Regina, 82, when she was mayor and was invited to read to students at St. Finbar for a literacy program. They immediately became connected, Ramos said.

The philosophy Ramos has learned from her is to be truly present with one another.

“Meaning, take time to truly be with people — listen carefully, resist the distractions and enjoy the ride,” Ramos said. 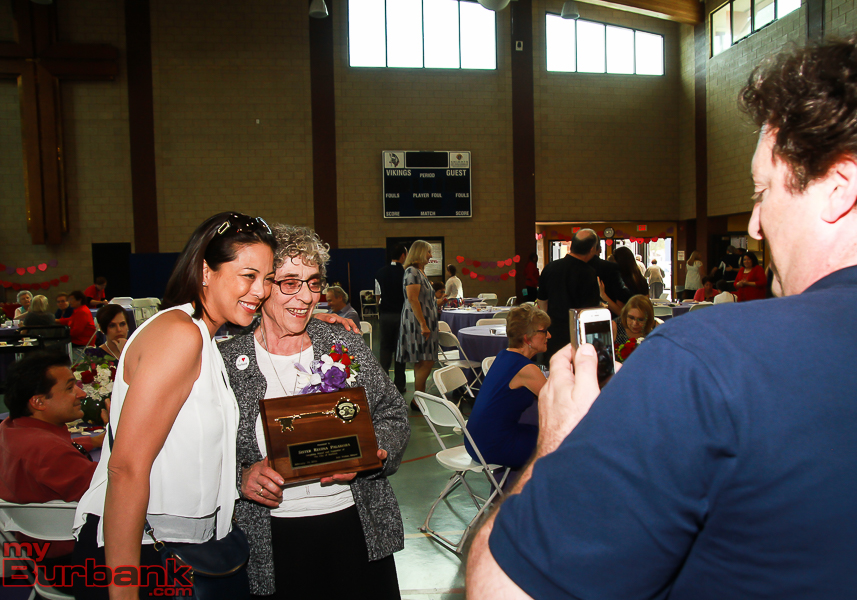 A highlight was when Frutos presented the Key to the City to Sister Regina. A mayor can present two keys per term, and this is the only one Frutos has given.

The honor was a surprise — mostly to Sister Regina who told Frutos’ wife Laura the key is for heads of state and powerful people. 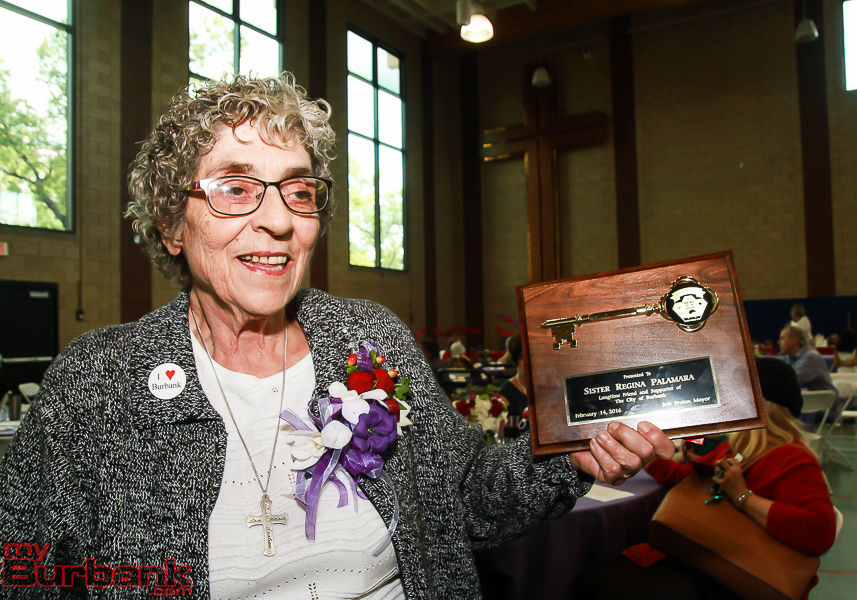 Mayor Frutos said that modesty is the reason she received the honor.

“The Key to the City is for the unsung hero — the person who does not expect anything in return,” he said. “Sister Regina reaches out to everybody — children, seniors, families and disadvantaged community members. The key is a small symbol of how many hearts and how many lives she has touched in Burbank.”

Sister Regina said she is humbled to have received such an honor.

She tried very hard not to heed God’s call those many years ago, she said. First her twin sister, Sister Loretta, now deceased, answered the call and people around Sister Regina said she would follow, which irritated her.

“I prayed not to become a sister and God did not hear my prayers,” she said. “God put a hook around me and asked me to at least try — and I did. But the first couple of months all I did was think of ways to run away. I kept telling myself — one more day, one more day and after a couple of months I said no that’s it. And I wouldn’t trade one day because I know that I’m called.” 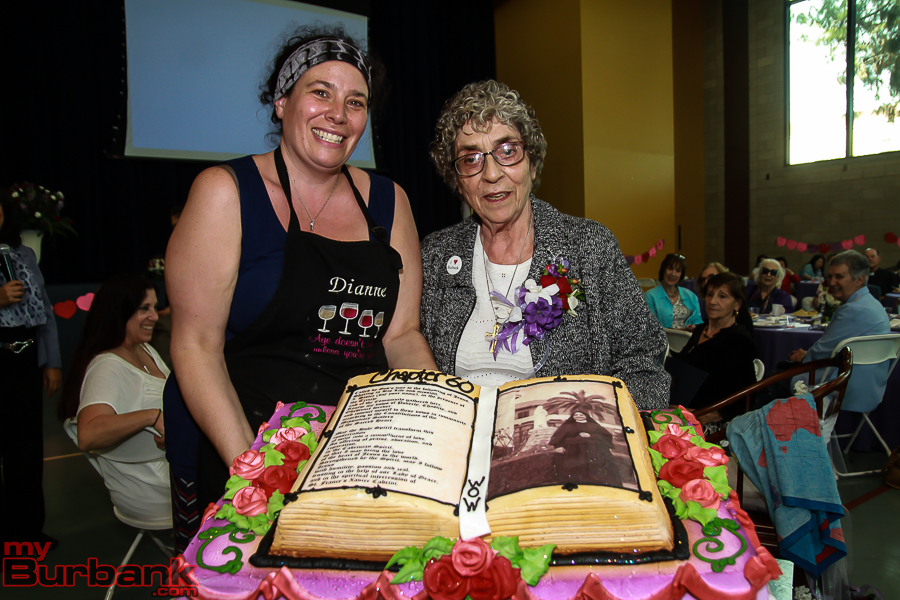 Sister Regina served as an elementary school teacher, a liturgical and pastoral minister in Brooklyn and Roosevelt Island in New York City, for more than four decades.

Once a 5-year-old boy came into her class with the familiar box of 64 crayons and sharpener on the bottom. He had gotten it for his birthday and he told Sister Regina he wasn’t going to share them.

“I used to say the Our Father prayer with the kids and change the words to children’s words so they would understand,” she said. “That day, I said something like ‘help us to share what we have’ and a half hour later, the little boy comes up to me and hits my arm and says ‘Sister, Jesus heard the prayer because I’m sharing the crayons.’ ”

Sister Regina returned to Burbank in 2002 when her mother moved into a retirement home and was undergoing chemotherapy. She’d see her mom in the morning and volunteered in the afternoon. After her mother passed away, she began volunteering full time. She stayed in Burbank to be near her other family members. She has a sister with four children and first cousins. 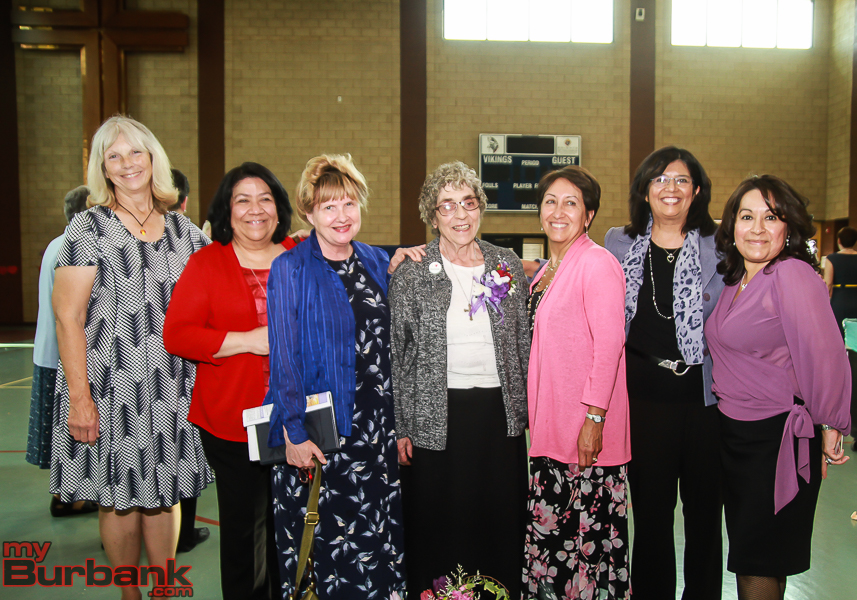 She is the sole representative of the Missionary Sisters of the Sacred Heart on the West Coast. She was doing such a great job here, the order told her to continue her volunteer work here, so she stayed on.

Sister Regina has been recognized for her dedication and commitment to youth, and for her missionary work and efforts in Africa, Ethiopia and the Philippines.

Locally, she is a supporter of Family Promise of the Verdugos, which works with homeless families to return to work and a home. She is also a member of he Knights of Columbus, the Cabrini Alumni Assn., Cabrini Companions, the Cabrini Literary Guild and the Italian Catholic Federation. She has offered invocations at many community events.

She crochets and sells colorful scarves and donates proceeds to the Cabrini Missions in Ethiopia. To support this mission, send a letter to her in care of St. Finbar School. 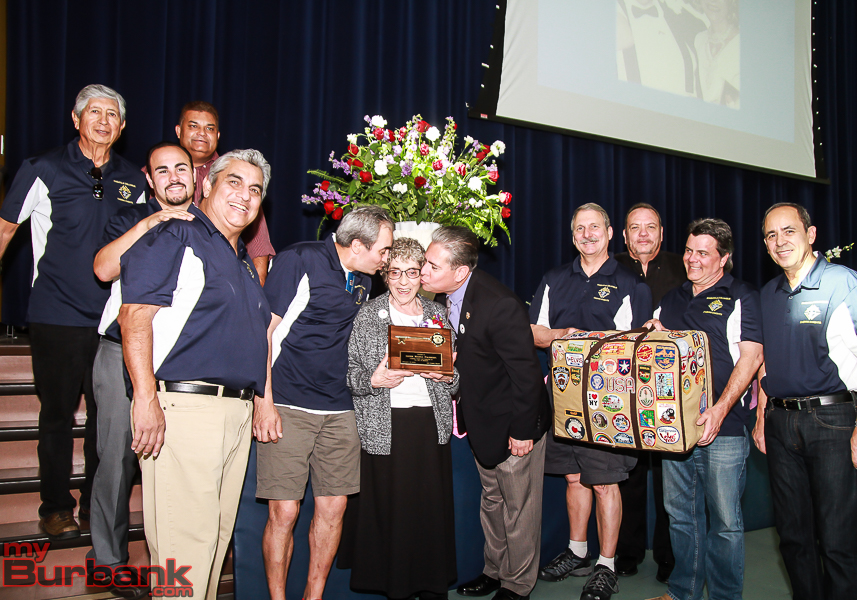 Sister Regina continues to carry out the transforming spirit of Mother Cabrini by attending to the needs of the elderly and children in Burbank, especially at St. Finbar School.

“I make them aware of life,” she said, “Every one of our chosen religions have the same basic principles — love, be kind, try harder and don’t give up — those are the beliefs that I stick to. I teach students awareness — especially to Be Kind — because the opportunities to be kind to others are all around us — we just have to be aware.”