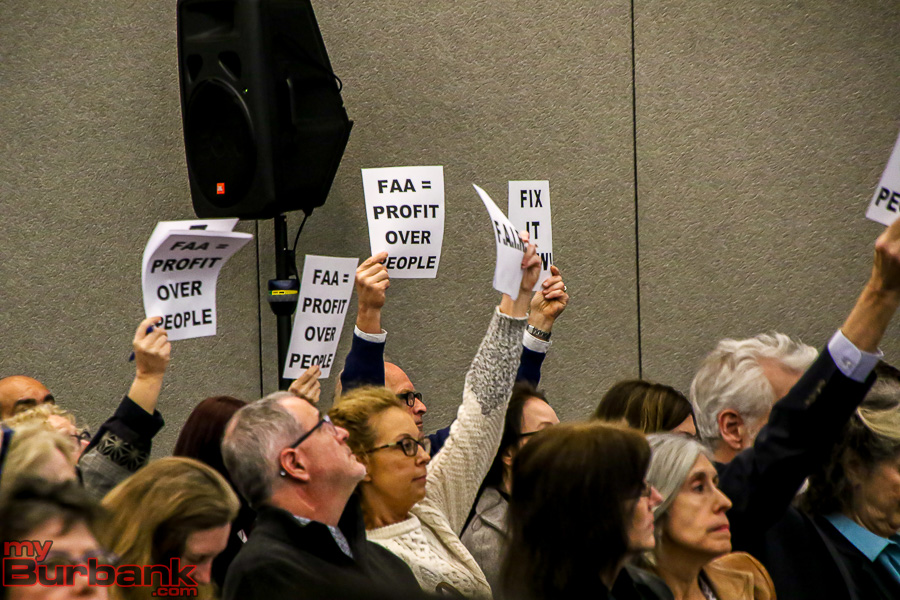 HMMH Inc., an environmental and transportation consulting firm, gave a detailed and lengthy presentation supplying studies, research and the pros and cons of the suggested solutions; the Task Force and community groups listened intently.

When HMMH confirmed air traffic from Hollywood Burbank and Van Nuys Airports had increased from 2017 to 2020, cheers and clapping erupted from the frustrated residents in the audience. Community groups have long said the extreme noise did not start until 2017 after the implementation of the FFA’s NextGen program. The NextGen satellite-based airliner navigational system, created to make flights safer, efficient and quieter, moved flight routes over the Valley from their historic paths.

A collective proposal by several community groups gave their own research and recommendations. Potential solutions included having planes climb to a higher altitude immediately after takeoff, dispersing flight routes in a wider range over the Valley, so no single community would suffer the bulk of jet noise and that the routes be returned to their historical paths. The FAA has said they will not return the routes to their earlier paths.

Beth Fulton, president of the Valley Village Homeowners Association said, “We have taken pieces of each group’s presentation and tried to figure out how is there a piece of this that can work, so everybody can try and get some relief. Our continued message is, share, share, share.”

The FFA disqualified most of the recommendations claiming FAA regulations, limitations on airspace, airliner safety, traffic from other airports and many other explanations.

“Some of the proposals that have been submitted in terms of changing flight paths is really concentrating most of the flight paths North of the airport–basically over our communities. We have a problem with that,” said Andres Ramirez, director of Pacoima Beautiful.

“We just have to be very fair in our recommendations,” said City of Burbank Mayor Sharon Springer. “We will make recommendations and those recommendations will go to the FAA, and they will say yes or no. The FAA may know another way to achieve that same outcome.”

Several community groups from the affected areas and representatives of the local congressional districts and California’s Senators were in attendance.

Suzanne Lewis, board member of the Valley Village Neighborhood Council was direct, “You know who regulates them [FAA].  Congress. That’s who they’ll listen to. So that’s who we need to be putting pressure on. I’m glad our congressmen are here. Even the senators… their representatives are here.”

The Task Force has just under a month to recommend possible solutions to the complex issue of Valley jet noise. The next meeting of the Task Force will be April 2 at the Los Angeles Marriott Burbank Airport.