A lot of people love to pick on officials. They become an easy scapegoat and target from coaches, players, parents and fans. This is especially true in soccer due to the number of times in a game that involve a referee making a decision that can have a major impact on a game. A penalty kick or red card is a game changer that often is the difference between winning and losing a game. Yes – there are times that a referee decision has cost us a game.

Even at the highest levels of the game, referees make mistakes. Now with VAR (video assistance referee) and television, and of course, announcers who know everything about the game, mistakes by referees are highly controversial and highlighted every day. What does this mean for youth soccer? How about high school soccer?

At the high school level, there has been a remarkable advancement in the quality of referees, with many referees also doing college and professional games. I see the referee as part of the “team” that are required to have high school sports. Most of them are high quality professionals who truly care about the game and our student athletes. I consider many of them to be friends and colleagues who have an important job to do. Working together, we can talk about the game and protect our student athletes. Referees often have a better viewpoint than the coaches and hear or see things that we miss. I always appreciate a referee taking the time to explain why he or she issued a yellow or red card – especially if it involves dissent, serious foul play, violent conduct or spitting at a player or match official. There is nothing wrong thanking a referee for a job well done. 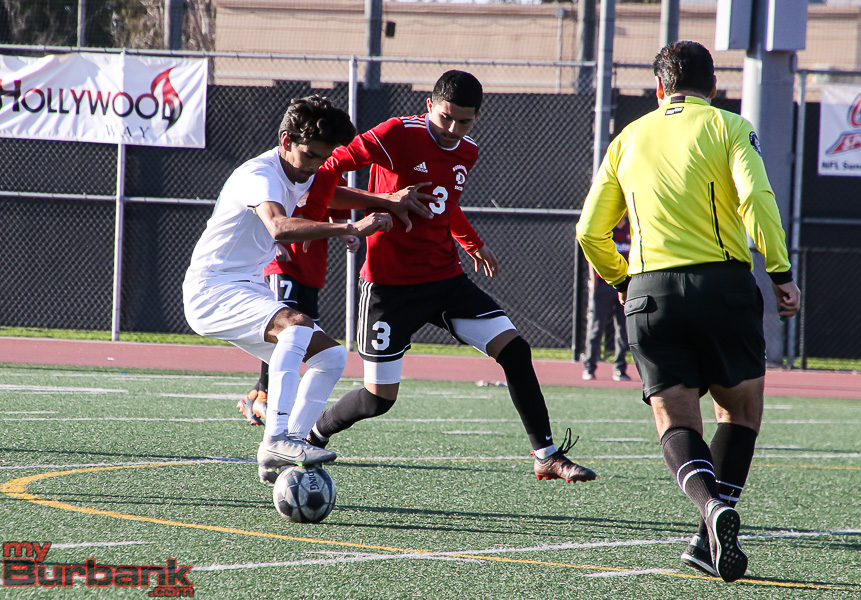 At the same time, there is a shortage of referees. Sometimes this results in low quality referees who are barely qualified and struggle, especially at lower level afternoon games. Think about how many people can take off of work to referee high school games during the day and it becomes obvious that there can be a shortage of qualified referees. Add in the factor of coaches, players and fans abusing referees and we have a recipe for a disaster. However, I look at this as a teachable moment – so our players learn to deal with all kinds of situations involving a referee. This becomes very important in a big varsity game involving a rivalry, league championship or playoff game. While we want emotion and enthusiasm, composure and discipline are a huge competitive advantage.

Some of the abuse that comes out of the stands is not only embarrassing but ignorant and shameful. On the field, the lack of understanding from coaches and players is appalling. Many do not know the laws of the game or how to behave. This is even more apparent in high pressure situations.

Even worse – is the blame game. How many times does a player make a mistake? How about coaches? Many parents see this as an opportunity to blame the official – rather than their own son or daughter. It is easy to say you lost the game because of the referee. To me – not only is it a lack of respect – what are we teaching our student athletes about being responsible for their actions? What kind of life lessons are we teaching when we can absolve ourselves from blame and say it was the referee’s fault?

If this was easy – we would not even have to discuss this. Soccer can be a physical, emotional game. Many non-soccer people clearly do not understand all of this and think it is easy to control. They do not understand that a red card can be issued for many reasons and this simplified misinterpretation can make matters even worse. I have explained to people that two yellow cards equals a red card or a red card preventing a goal scoring situation is like a basketball player fouling out of a game. A red card for abusive language, spitting, fighting or attempting to injure an opponent is not acceptable at any level.

At all levels, we want referees who are fair and recognize the importance of making the game safe for our student athletes. Each referee is different and has a different interpretation of the laws of the game. Yes, referees make mistakes and this is part of the game. This can be tolerated as long as there is an honest relationship and mutual respect from all participants in the game. Referees are an important part of the team required to bring high school soccer to our community. Most referees have a big heart and truly care about the game and our student athletes. The next time that you think it is okay to abuse an official, think about what would happen if there were no referees or even worse – if you had to be the referee or… your son or daughter was the referee. Try it sometime.

Michael Kodama was the boys soccer coach at John Burroughs High School for over 30 years. He has been involved with youth soccer at the high school, club and recreational levels. He is a member of the United Soccer Coaches Association and was a Board Member of the Southern California High School Soccer Coaches Association. He also refereed youth soccer.