Since the voter passage of the Measure S Bond to support infrastructure fixes at Burbank Unified schools, a number of projects have already been completed and more are in the works. The $110 million dollar bond has been divided into three three-year issuances, with each bond issuance totaling about one-third of $110 million. Over the next few weeks, myBurbank.com will look at various aspects of the Measure S bond and the effect on Burbank’s schools, city and community.

While the citizens of Burbank recognized the need for infrastructure fixes to aging school buildings and the value of using the bond process and voted to pass Measure S earlier this year, the public may wonder where and how is the bond money is being used. BUSD has put in place a multi-step plan for targeted work, designs, approvals and construction. An Oversight Committee, made up of district staff and community members, makes sure the process and work adheres to the specifics of the bond.

“When you look at a bond project, it is overwhelming. When you have fifteen components at twenty different sites and you try to coordinate and schedule every particular little step of the way for the public to see, it is cumbersome and mind boggling to be able to show every single portion of every step along the way,” explains Craig Bell, Burbank Unified School District Director of Facilities. “But, that is a challenge we have taken very seriously with this particular bond because this was a sore subject from the last bond. And so, the message was pretty clear to the district and the staff, as we move forward, to be very transparent and show from the design process, to the input from the community, to the site, to the board, that we are being open… trying to be transparent in making sure the public is confident on how we are spending this 110 million dollars.”

First Set of Projects The first issuance of bonds, for the first of the three-year projects, totals around $41 million dollars. While exact costs will ultimately be determined by market prices, that number is the working number. Project managers do expect that some funding from the state, estimated to be about $9.5 million dollars from the State Facilities Matching Program, will also be obtained, stretching Measure S dollars further. 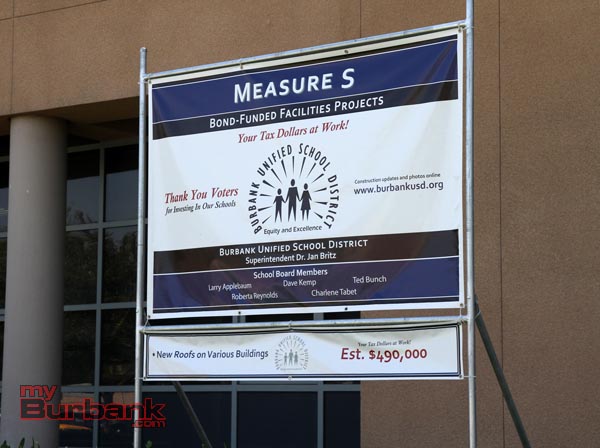 Since the passage of the bond in March, a lot of administrative work was needed at the start, to get the bonds issued and sold. The process took about two months for the paperwork and those bonds to actually be sold, generating $41 million dollars. When the $41 million was raised by mid-May, the project managers were given the green light to move forward.

“That did not mean for those first two months we just sat still. We were anticipating projects that we were going to be able to start and complete yet this past summer before school started. So that didn’t give us a lot of time to do the planning process, the design process, the procurement process of contractors, job walks, and putting those scopes of work together to actually award contracts,” comments Mr. Bell. “We had to look at something that was an immediate gratification, that we could show the general public as a thank you for passing the bond… projects we could jump on quickly that didn’t take a whole lot of involvement in the approval process.”

Completed Work Summer 2013 “We planned early on to do some fencing, some asphalt work, playground equipment and playground surfacing replacement. So we chose Washington Elementary as one of those school sites we could jump on quickly and get some immediate work to be done over the summer before school started.”

At same time, Facilities staff began the planning process for replacing already-identified roofs in need of urgent attention, over the past summer. Best Contracting was chosen through bidding process, and by time school started in August, all roof projects were 85% completed. Minimal detail work that could be completed on weekends and not interfere with the weekday activities at the school sites was all that remained. 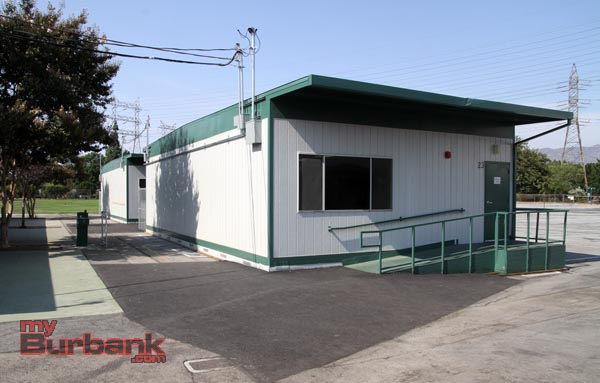 At Stevenson Elementary, two portable classrooms were installed and finished completely within a week of school starting. The portables provided needed extra room to help accommodate the enrollment increase the school has experienced.

New synthetic turf in eight courtyards in all the different wings was installed at the Burbank Adult School, along with new interior fencing. The Adult School program has given Facilities a lot of praise for this infrastructure work, reports Mr. Bell, and is interested in doing more work in the future.

The last bond measure for Burbank school was in 1997 and did not address all these issues. The newest BUSD school was built in 1955, so the buildings are functioning on borrowed time and have reached a critical point where fixes must be made. Some original water lines feeding the schools are 70 years old.

“The infrastructure has so badly been ignored for years – I’m not pointing fingers – it’s just a fact of life,” comments Mr. Bell.

In early 2012, Facilities, Information Technology and BUSD staff started estimating costs for necessary fixes based on industry standards, for example the price per square foot for asphalt, and created a template of work to be done over the next nine to ten years. They created General Obligation (GO) Bond spreadsheets and were able to determine how much of a bond to ask for from Burbank voters.

The GO Bond spreadsheets totaled $123 million and the Measure S bond went to $110 million. Matching funds from the state are expected to offset much of the remaining costs. The template spreadsheet is a wishlist of infrastructure fixes needed, based on urgency. Every project has to go out to bid, and the work will go on until the funding cap is reached.

“Those numbers, as you look ahead, over the nine to ten years, those costs are going to go up, come down, be all over the map,” commented Mr. Bell. “You just don’t know at this point what those real numbers are, but this was our best guess at the time to come up with a realistic number.”

Plans are designed and refined by the approved architects and then the district reviews and makes changes. The plans are then shared with board through the design phase, involving the community-driven Oversight Committee. Once approval from the Department of State Architects (DSA) is made and there are no changes, then BUSD goes through procurement process and out to bid. The DSA reviews and makes sure the plans follow all codes and state guidelines, a process that can take three to six months. Once the winning bid is selected and contracts signed, the construction is scheduled. 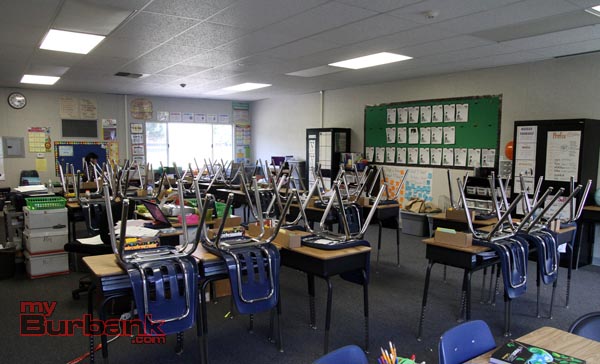 Inside one of the New Modular Classrooms at Stevenson Elem. School (Photo by Ross A. Benson)

BUSD will complete some projects between now and the start of the summer 2104 mini-modernizations. New playground equipment and synthetic turf surfaces at five elementary schools’ main playground areas, for Edison, Jefferson, McKinley, Providencia and Disney, are planned to be completed by the end of this year.

Check in tomorrow for Part 2 of the interview with BUSD Facilities Director Craig Bell and additional information on upcoming Facilities upgrades to Burbank’s public schools.