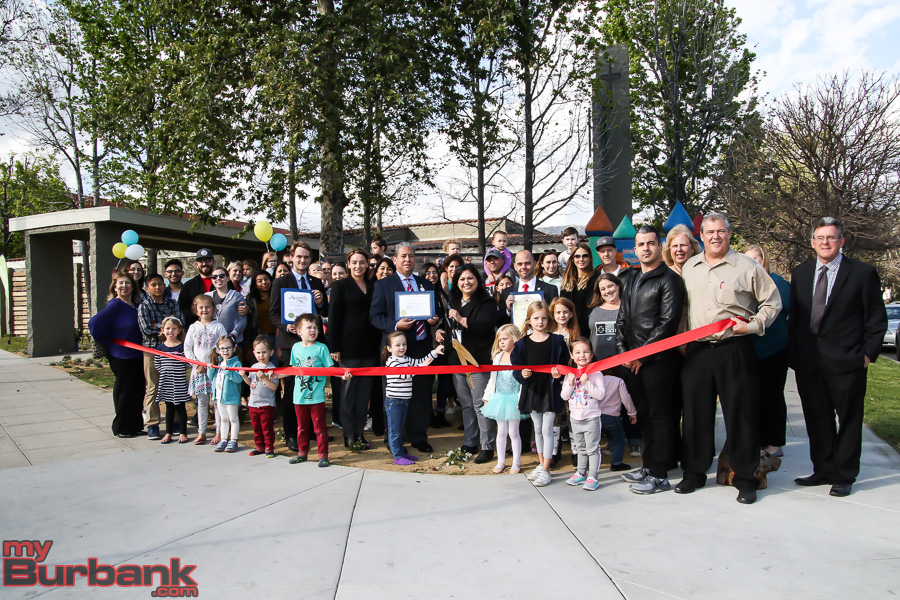 On the afternoon of Thursday, April 19, families and city officials gathered at the ribbon cutting ceremony of the South Hills Children’s Center located at 222 S. Victory Blvd.

Director Maria Martinez, who launched the daycare, was grateful for the large turnout in attendance. Burbank city councilman Bob Frutos and other city officials assisted Martinez as she cut the ribbon, officially opening the daycare to the public.

“It is a great resource for the community. Thank you for your efforts for opening this up and we hope for many successes for you,” said a city official, handing a certificate to Martinez.

“My passion is to help others and this church has given me the opportunity to open this center as one of my big dreams because I can support the learning and development of each child in their own way,” said Martinez.

Crafts, painting, and a bounce house were provided at the ceremony to celebrate the daycare’s official launch.

South Hills pastor Dave Stewart was in attendance during the ribbon cutting ceremony, proud of Martinez for her accomplishment.

“It’s been a three-year dream so we’re excited it’s finally happening and about Maria’s vision coming to be. For us, it’s exciting to be able to provide something like this for our community,” said Stewart.

Parents are thankful to have a place where their kids can go, knowing they won’t get lost in the shuffle, and be treated according to their individual needs.

“I’ve really appreciated the level of attentiveness that comes with people of faith who have an underlying understanding of what it means to not just teach your kids, but to love them as well,” said Jessie Brewer, mom of Noah (7) and Sophia (4).

Among the parents who are excited about sending their children to a daycare they can trust is Jon Torres, who works within the church as the family pastor.

“They send out these weekly newsletters where they talk about what they do for the entire week to inform parents what’s going on. Not only that, but their Instagram page shows that the team behind the Children’s Center values excellence,” said Torres.

The team who works at the Children’s Center hopes to foster an atmosphere where families can feel safe and cared for. Teachers use a curriculum called “STEM,” which stands for science, technology, engineering, and math.

“There’s also a lot of focus on developing and maturing their social skills, not just academically,” said Paola Bracamontes, one of the teachers.

A statement on the Children’s Center website at http://southhillschildrenscenter.com explains the philosophy behind their method of education: “We believe children are like little scientists and have a natural curiosity to explore their world. We create environments where optimal learning takes place.”