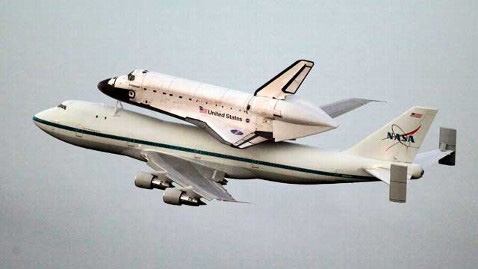 Burbank residents, along with others in Southern California, will have one last opportunity to view the Space Shuttle Endeavor flying through the sky on Friday morning.  It will be the last time a space shuttle will fly, ending a chapter in America’s space exploration program.

According to information from NASA, the shuttle will be over the greater Los Angeles area sometime between 11:30 a.m. and 12:30 p.m. on Friday.  It will be riding atop a special Boeing 747 that has carried it from Florida to Los Angeles. The plane and shuttle are scheduled to land at 12 noon. at Los Angeles International Airport.  It was originally schedule to land at 11 a.m., but it’s take off time from Edwards Air Force Base was pushed back an hour to allow for fog to lift in San Francisco before the shuttle flies over that city, and Sacramento prior to coming to Los Angeles.

If the plane carrying the shuttle follows the route that was flown by two jet  trainers making a practice run on August 25, it will come into Burbank from the southeast out of Glendale, after flying by the Griffith Observatory, roughly following the Golden State Freeway, at 1,500 ft.  The two planes made a 90 degree left turn at approximately Magnolia Blvd. and headed west.  The shuttle is scheduled to fly over Universal Studios, so the assumption is that it will head there, before continuing on it’s route.  Although the exact route has not been released, the shuttle is supposed to fly over the Jet Propulsion Laboratory in La Canada-Flintridge, Disneyland, the Queen Mary and USS Iowa in Long Beach, it’s future home in Exposition Park, the Getty Museum, and the Hollywood Sign.

The flight path, if it follows the practice run, should have the shuttle flying over or nearby to several schools in Burbank, including McKinley, Disney, Edison, Roosevelt, and Stevenson Elementary Schools, Jordan Middle School, and John Burroughs High School. According to the Burbank Unified School District, school principals have been notified about the shuttle flight. It is uncertain if students will be allowed to go outside the classroom and view the shuttle.  Parents may want to call their child’s school and determine if students will be allowed to watch the shuttle flight.

After the shuttle lands at LAX, it will be housed in a United Airlines hanger, where it will be readied for the drive to it’s permanent home at the California Science Center.  That move will take place sometime in October.