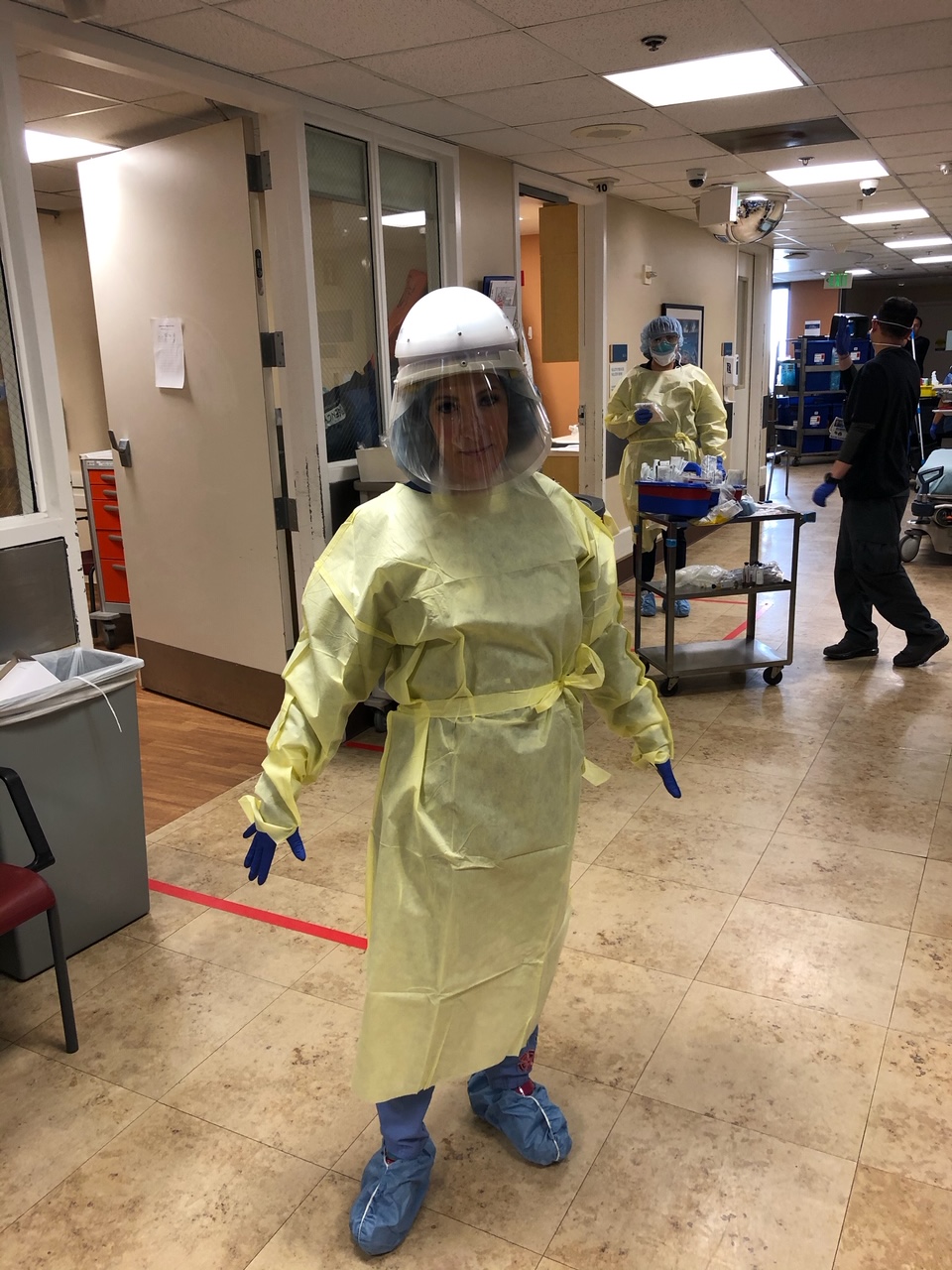 Two weeks ago, the Burbank-Glendale area had only a handful of known cases.  As of April 9, 282 cases.  And over the next two weeks, the cases will continue rising, perhaps dramatically, as the novel coronavirus makes itself felt among those of us who had been infected, but without any symptoms until now.

If we’re lucky, April will turn out to be “the cruelest month” rather than May, or June.  We need things to turn around before summer, or we’ll see people dying from an oxygen-starved economy alongside those dying from oxygen-starved lungs.

In the meantime, “when we’re in hell, keep marching.”  Straight talk and sound advice will help us climb out of the virus pit sooner rather than later, and this is exactly what Dr. Angelique Campen offered to the ZOOMed-in Noon Rotary audience yesterday.

Dr. Campen graduated from UCLA medical school, got certified in emergency medicine and ran St. Joseph’s Emergency Medicine Department for many of her 20 years there. Today, she’s the Chief Financial Officer for St. Joseph’s Emergency Medical Group.   “She’s fluent in all things concerning emergency medicine (as well as Italian and Greek)”, said Gregory Madore, President of the host Rotary Club of Burbank Noon.

Most importantly, she’s on the front lines of the fight against this “novel” virus, whose unique methods of attack cannot be found in a medical book, but instead are being discovered in the world’s emergency rooms, be they makeshift or modern.

St. Joseph’s is ready for The Surge

Meanwhile, Saint Joseph’s has been actively preparing for the onslaught of corona cases, paying close attention to the battles of the bug raging across Europe, New York, Detroit and New Orleans.  “Half of the entire hospital is set up to offer intensive unit care, if necessary,” said Dr. Campen.

Hospitals typically operate at 90-95% capacity, but elective surgeries have been cancelled, leaving extra room available for fighting the virus.  St. Joseph’s made sure they could fill that space with critical equipment.  “We have 100 ventilators on hand,” said Dr. Campen. “We usually have had only 20 ventilated patients in the ICU.”

The doctors and nurses also have at their disposal self-contained ventilator helmets (much friendlier than skin-chafing masks) as well as full-body protection when caring for critical patients.  The virus will probably have surprises in store (remember, it’s a novel corona virus) but St. Joseph’s has plenty of ammunition.

Dr. Campen points out that there are currently two strains of the virus: one causing fever and diarrhea; and the other, which has gotten most of the press, attacking the respiratory system.  “It is mostly a disease of the elderly,” she says. Those over 65 are most at risk, particularly those with pre-existing respiratory conditions like COPD and emphysema, which make up the great majority of those needing a ventilator.  (In Dr. Campen’s opinion, many in their 30’s that tested positive are health care workers, for whom being tested is a priority.)  “In my experience, everyone under 45 who has been severely ill from the virus has been smoking or vaping,” says Dr. Campen.

One of the newer discoveries is that some virus sufferers have “happy hypoxia;” that is, their lungs are at 70% oxygen- rather than the healthy 90+%–but they report no breathing discomfort.   “Putting these people face down helps increase oxygen-carrying capacity of the blood without using the ventilator,” explains Dr. Campen. “The longer a patient is on the ventilator, the greater the chance of lung damage. So ventilators have to be used carefully, and more as a last resort.”

Millions of lives may hang on whether they can receive hospital care if they need it.  “In the absence of a vaccine, it takes 60% of the population to achieve herd immunity,” points out Dr. Campen.  In round figures, there are 330 million people in the U.S., so 198 million of us would have to be infected before enough of us acquired natural immunity to prevent the further spread of infection.  Just for illustration, suppose the death rate were a flulike 0.1% if all patients were able to receive the care they needed, including time in a hospital.  But what if large numbers of people could not get needed hospital care because the hospitals were overwhelmed? Then the death rate would go up.  If it went up to only 1.1%, that would mean 1.98 million more people would have died.

Left to its own devices, the novel coronavirus can easily overwhelm hospitals and boost the death rate by 1% or more. The virus is a sneaky saboteur that spreads the gasoline far and wide and then lights the match.  People catching the virus are without symptoms for five days or more.  “And you can spread the virus for up to two days before you yourself start showing symptoms,” said Dr. Campen.  That’s a lot of gasoline.

“What we’ve done to slow the spread of the disease has been successful,” said Dr. Campen.  Even though a lot of horses had already left the barn, California’s shelter-in-place and social distancing seems to be working. The strategy is reduce the number of cases per day while at the same time increasing the beds available for those needing them until, ideally, every virus sufferer who needs a bed can get one, and the death rate is thereby kept to a minimum.  Possibly saving a million or more lives throughout the U.S..

How To Avoid Catching the Coronavirus

What to Do If You Have It

But what if you do have symptoms?  Here’s Dr. Campen’s advice:

Prevention and treatment are good as far as they go, but when will there be a cure?  Dr. Campen estimates that a vaccine for the virus “is 12 to 14 months away.”   One can only hope that we get it right the first time. “The Ebola vaccine got pulled from the market when it backfired,” she said.  “Doctors discovered that it triggered an overwhelming immune response.”  A successful coronavirus vaccine would be taken in addition to the flu virus annually; hopefully, the coronavirus would not mutate quite so readily as the flu virus.

Flu vaccines can be effective, with a due regard to their limitations. “Vaccines take two weeks to develop antibodies,” says Dr. Campen. “So if you wait too far into the flu season, then you may catch the flu before the vaccine can immunize you against it. Best to take the shot early in the season.”  Moreover, Dr. Campen pointed out that UCLA had tested 3,600 people suspected of harboring the coronavirus.  Only 10% tested positive; reminding us that there are still plenty of other respiratory viruses only too happy to make us miserable.

And so now we come face-to-face with our dilemma:  What about those of us who have so far avoided the virus, perhaps by staying mostly at home, maintaining social distance and washing our hands more than Macbeth’s wife?  Several cases come to mind:

At this point, we need to start factoring in the deaths that may result from a wrecked economy as well as those that result from a ravaging disease. Perhaps we can think of a compromised economy as a kind of “side effect “ of the “medicine” of our semi-quarantine.

Minimizing total deaths from both disease and cure must become the new goal. Hospitals like St. Joseph’s, which have prepared for sudden contingencies and heavy caseloads, make it far easier to the rest of us find workable solutions.

To learn more about the coronavirus and how to fight it, visit Angelique Campen on facebook or visit glamerdoc on Instagram.