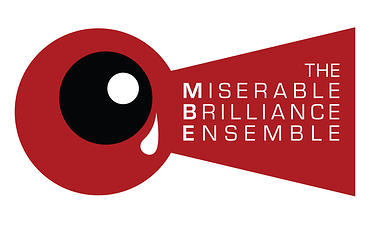 In just four months, Miserable Brilliance Ensemble (MBE) has self devised their second production, “Stories on the Rocks.” After a surprisingly successful run of their first production “Bench Stories,” performed at the ACME Theatre in Los Angeles, the group of self-starting newcomers continue to bring their original and unique blend of humor, absurdism, and tragedy to life.

At the start of “Stories on the Rocks,” the audience will realize that what they are seeing is quite untraditional; experiencing six, 10-minute plays where redemption, revenge and reconciliation become the alcoholic mixture in the relationship cocktail. It is a show that will have you laughing, crying, cringing in your seat, and possibly heading for a stiff drink afterwards.

MBE prides itself on leaving “Nothing to Chance”. They saw their success in Bench Stories as proof that what first started off as an alumni scene study class at the New York Film Academy, now had the potential to become a professional theatre company. This group of actors set in motion, the creation of MBE, writing, directing, and producing original plays and ultimately allowing them to take control of their own destinies.

“By acting in our own works that we truly believe in, our mission is to leave the audience feeling as if they have just looked through the keyhole of life” states Artistic Director, Anthony Montes. Stories on the Rocks is produced by Meghan Anne Riley, starring Sara Blindauer, Kika Cicmanec, Michael Dvorak, Alex Genther, Desi Ivanova, Valentina Kolaric, Sam LaFrance, Won Lee, Roxanna Medina, Anthony Montes, Sophia Monti, Charlotte Plummer, Adam James Shirley, William Smith Walker, and artistically associated with Yoshua Shelton and Tina Fy, leaving room for an interesting mix of personalities and talents to bring the show together.

Stories on the Rocks will run February 9th through March 17th, 2013 every Saturday at 8pm and every Sunday at 7pm at the Missing Piece Theater in Burbank, CA and tickets can be purchased for $12 on their website, www.MBEnsemble.Wix.Com/Home.