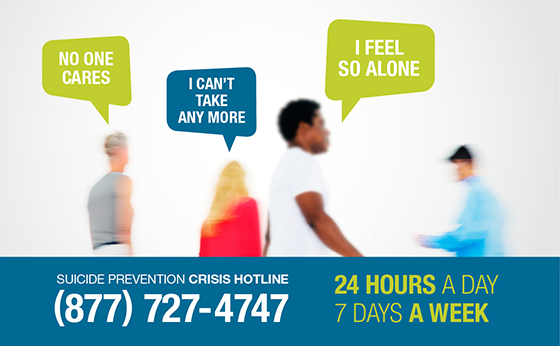 Earlier this month, a man jumped to his death from the Magnolia Boulevard overpass onto the Golden State (5) Freeway.

In January, a 15-year-old was severely injured after jumping from the Burbank Boulevard overpass to the side of the (5) freeway in an apparent suicide attempt.

“We’re seeing more and more of it,” said Ginny Goodwin, a licensed therapist with Family Service Agency and director of the school based counseling program. “There is an increase in alarms and crises.”

Goodwin said that students are becoming more aware of suicide, and that social media may be playing a role in the increase and in the awareness of suicide.

“They hear more of it happening, it is not as hidden, and more people are raising their hands, saying they are in trouble as well,” she said. “[Social media] has caused more awareness, although it is hard to tell if [suicide] is increasing because of it.”

Goodwin said that ideations, or suicidal thoughts, have increased as well.

Part of what is assessed with students or anyone who seeks assistance with suicidal thoughts is whether they have a plan, and the means to carry it out, Goodwin said.

“This last year more students were admitting suicidal thoughts and thinking about plans, so we had them hospitalized or evaluated,” Goodwin said.

The school-based program was established over 15 years ago and about 1,000 students receive counseling annually, she said.

Counseling is prevention, and prevention is mental wellness, Goodwin said, a message she takes to students and parent groups.

“It allows students to share their feelings and thoughts — that’s the beginning of prevention,” she said.

It starts with students who are in elementary school and teaching them to deal with feelings of sadness or being out of control.

“They are learning at a young age that they can talk about things,” Goodwin said.

As students enter junior high and high school, she sees them get back into counseling.

Family Service Agency opened its doors in Burbank over 63 years ago, and while many people know the agency is a resource for counseling, suicide prevention and domestic violence, there are still those who do not, Goodwin said.

“We work with all community members, all ages, and work with many different situations,” she said, adding that the domestic violence program was created over 20 years ago.

“When I started with this program and elementary school students, parents were more alarmed when we would have students referred,” Goodwin said. “They immediately wondered, ‘What’s wrong?’ The mindset has changed; it’s become more sophisticated, and more and more [people] recognize the need for it.

“It’s less of a stigma, less taboo, but it is still out there. But, we have gotten a lot better with it, in my experience. We see it in the media. We do need to see more awareness, although I am glad we are seeing discussion about it.”

Steve Ferguson, the newest member of the board of education for the Burbank Unified School District, took the initiative to draft a mental health policy that includes a suicide prevention plan.

“Suicide is the catastrophic failure of mental health,” he said.

The greatest thing we can do as a community is to “remove the stigma from those seeking help from health professionals. Stop describing children as odd or weird,” Ferguson said. “We are all dealing with something different. As a community we have to work together and encourage people to seek help if they need it. The cost is too much to bear.”

Ferguson reviewed how funding for mental health programs is being spent and if there was a clear vision. It was during that process that he realized there was no board policy on what to do when there is a suicide. The school district has its own policy, but here was nothing about suicide prevention, he said.

As part of a new mental health master plan, Ferguson wanted to look at all existing resources, identify any gaps and examine how they might provide services better.

A draft mental health master plan includes annual professional development on recognizing self harm and the signs of suicidal behavior; it mandates reporting and a mental health assessment on the same day and creates opportunities for students to recognize the importance of mental health by making it a part of the curriculum.

In his personal life, Ferguson said he has seen three suicides, including that of his sister’s father.

“I have been aware of it and exposed to it,” Ferguson said. “When you see the aftermath, it’s the darkest thing you ever see in your life.

“How do we prevent it, or look to prevent as many as possible?…it is a constant effort.”

While Ferguson said it is not clear if suicides are on the rise because privacy issues with student information have prevented tracking, they now will be able to monitor trends to hopefully better address the issue.

Police statistics show suicides have been on the decline the last two years.

This year, there were four suicides with 13 attempts to commit suicide.

However, Ferguson noted that the number of hospitalizations for those in danger of committing suicide is about 200 to 300 annually.

“These are referrals from a school, from elementary school students to high school students,” Ferguson said. “It’s a pervasive problem. It impacts all age ranges.”

But those numbers do not include families that may call police or take a child to the hospital, or referrals from the Family  Service Agency or other mental health agency, he said.

“A policy is the first step in a long-term discussion,” Ferguson said, adding that the board is scheduled to discuss the draft mental health and suicide prevention plan on Sept. 2.

“We have seen a number of public suicides,” Ferguson said. “We have specific groups with elevated risk factors, such as the LGBT [lesbian, gay, bisexual, transgender] population. There’s a huge influx.”

“There’s no statewide mandate, but we need to have this conversation,” he said. “We’re going to be leaders.”