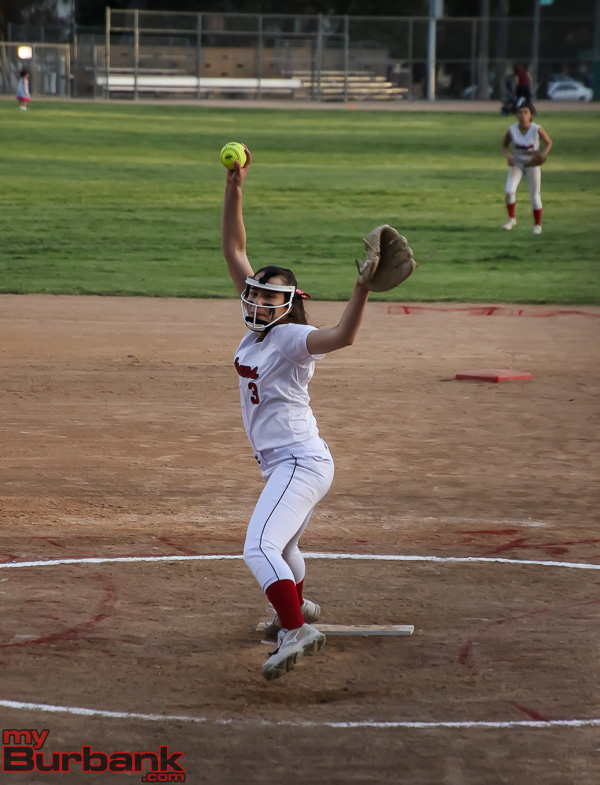 Dyani Del Castillo was credited with the 5-4 win over Burbank. (Photo by Ross A. Benson) 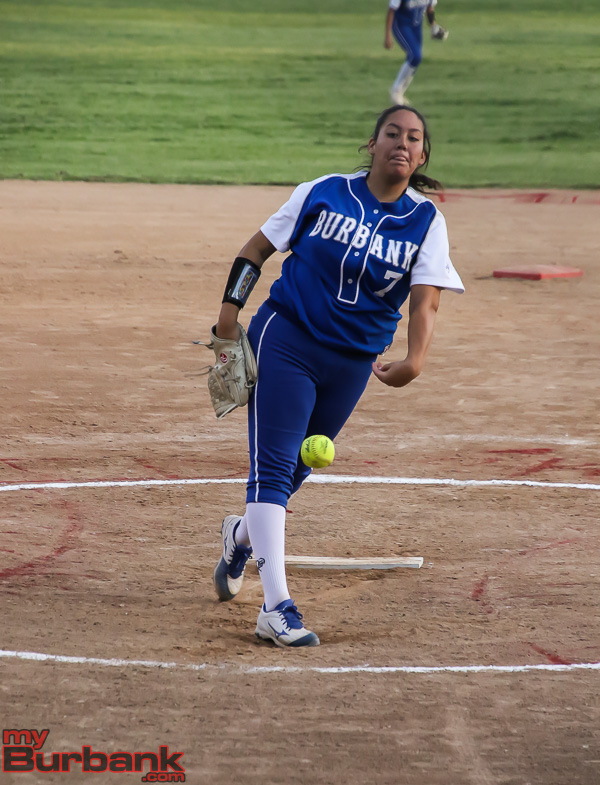 Alyssa Porras struggled at times and was the hard-luck loser. (Photo by Ross A. Benson) 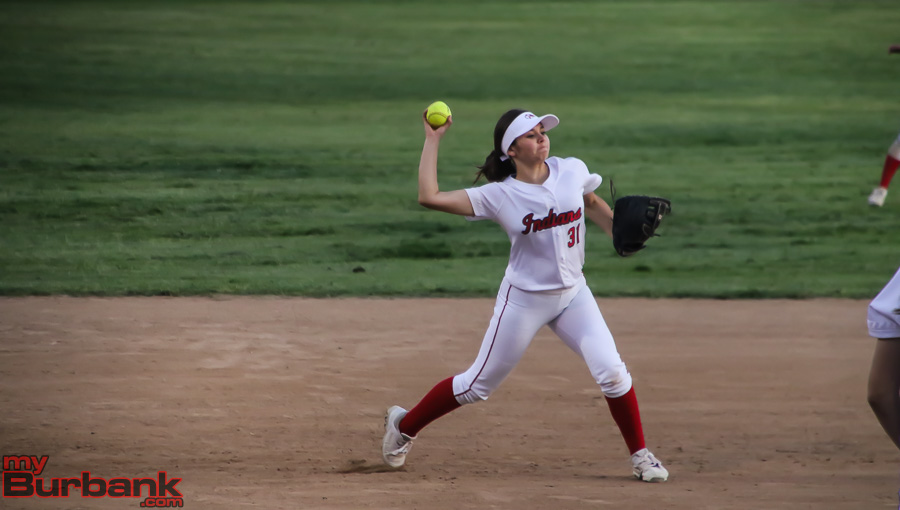 Citlali Mendez unloads a throw during a one-run win over Burbank. (Photo by Ross A. Benson) 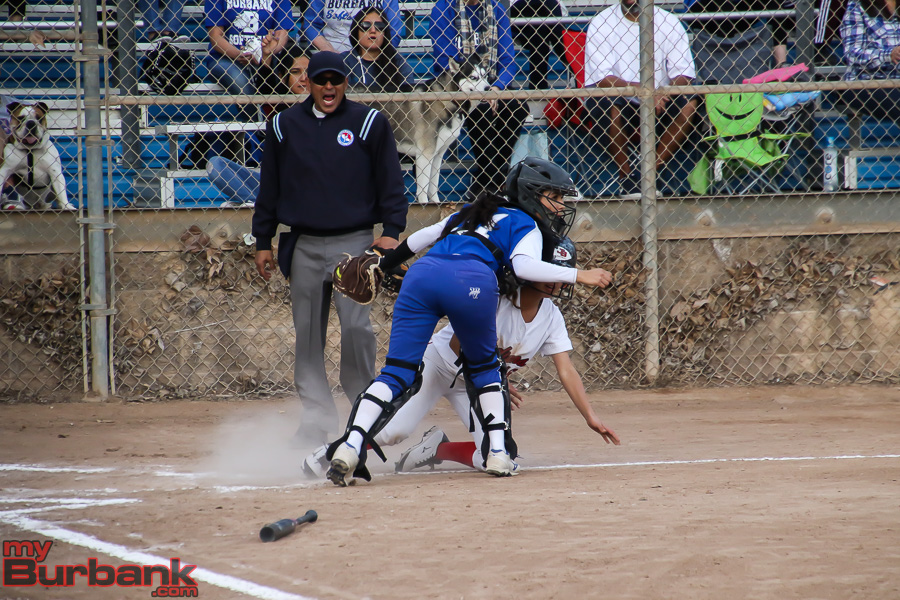 Desi Gomez, who usually plays third base, was behind the plate for the Bulldogs. (Photo by Ross A. Benson) 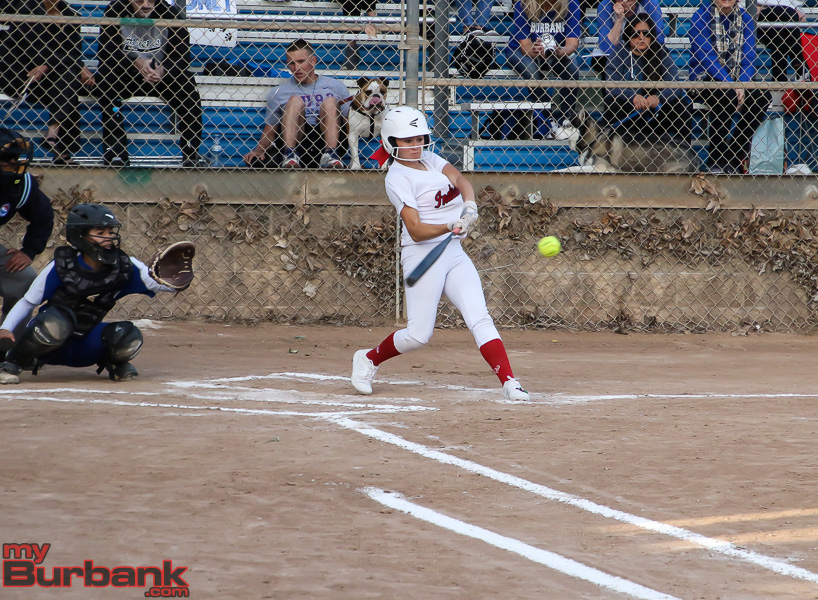 The Indians collected 14 hits with five runs against the visiting Bulldogs. (Photo by Ross A. Benson)

Because of the talent available, it would seem that if the Burbank High and Burroughs softball teams don’t qualify for the CIF Southern Section playoffs, its respective seasons will not be considered very successful.

Burbank is coming off a campaign in which it went 16-12 overall and 10-4 for third place in the Pacific League. 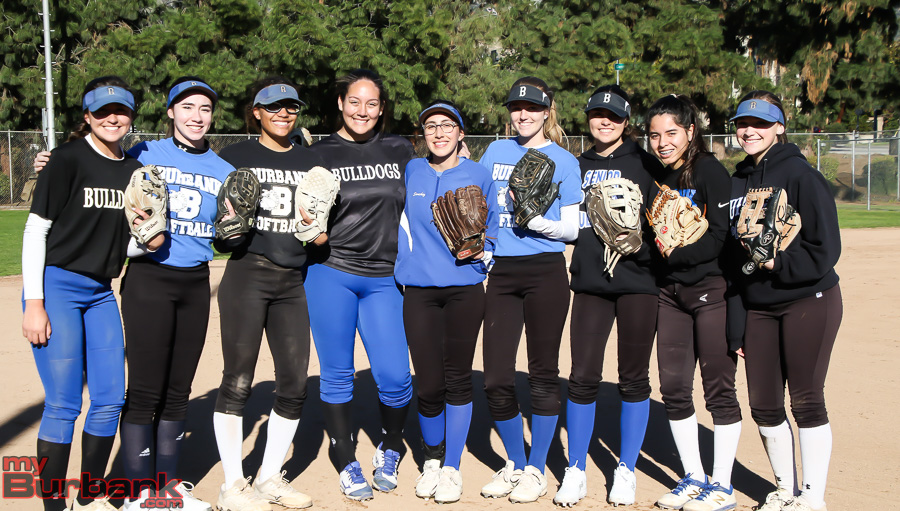 It’s all for one and one for all as the Bulldogs ready for the Pacific League season. (Photo by Ross A. Benson)

The Bulldogs played in a Division IV wild-card match against Norwalk and fell 4-2.

Burroughs went 14-5-1 and 12-2 for second in league and after defeating Bonita 2-0 in a Division III opening-round game, lost to Redlands 4-0 in the second round.

“I believe that we’ll do fairly well this year,” Burroughs coach Wes Tanigawa said. “I brought up a few new girls from the JV. Overall we should be pretty successful, but softball is the way it is and you never know how the ball is going to go.” 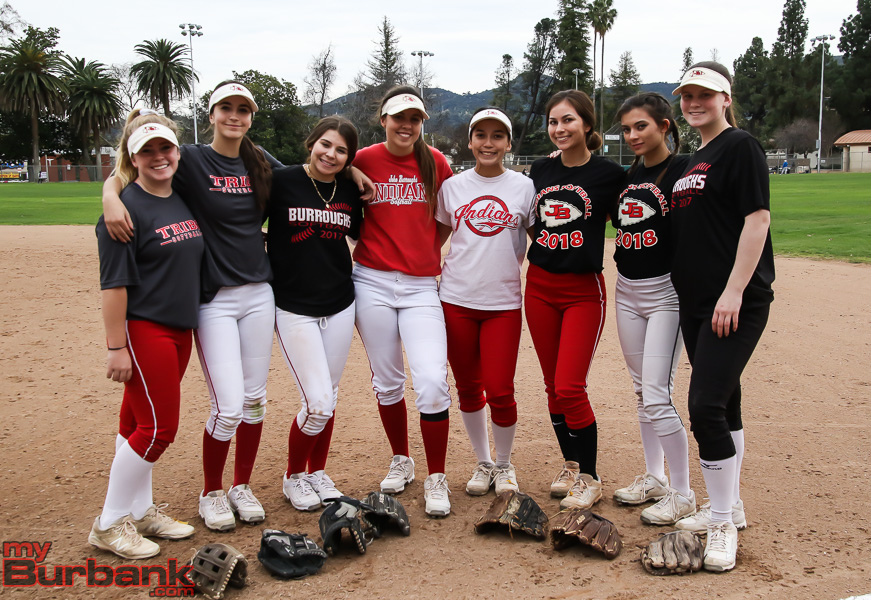 The Indians are gunning for another CIF Southern Section playoff appearance. (Photo by Ross A. Benson)

Tanigawa is optimistic about this squad.

“These girls that we have are a really good core group. They work together. They pick each other up,” he noted.

Tanigawa also likes that the team doesn’t rely on one aspect of the game.

“I don’t really necessarily see one thing as our strength,” he pointed out. “We’ve lost our star pitcher [Presley Miraglia]. We have pitching. I’ve got a freshman who is looking really good. I brought up a few girls with hopefully a couple of bats.”

To date, Burroughs lost to Newbury Park 8-0 in the Suzanne Manlet Tournament and collected a 3-2 victory over San Fernando in the same tourney.

The Indians begin league play on March 5 when Pasadena makes a visit and will host Burbank on March 29 and travel to the Bulldogs on April 25.

The most valued commodity is always pitching and the Bulldogs, who lost Allie Benson to graduation, have a good one in senior Alyssa Porras. 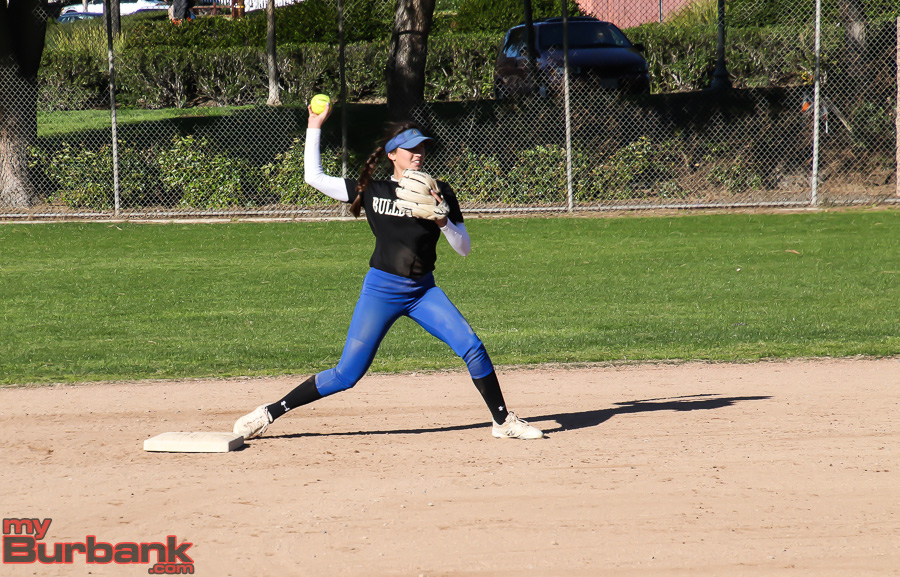 Infield play is always vital, so the Bulldogs practice being perfect. (Photo by Ross A. Benson)

Mike Delaney, the Burbank coach, thinks this should be a productive season.

“If we play to our ability, and we have some kids that step up, we can compete with anybody,” h said. “Our kids don’t shy away from competing with anybody. We play a tough tournament schedule because it helps us in league. CV is probably the team to beat this year.”

“If we play the way we can, we’re a top three team for sure,” he said. “If we play even better than that, we can be a top two. I’m not discounting this team from anything.”

Burbank has lost to Louisville 6-4 in the Hart Tournament and fell to Calabasas 6-4 in the same tourney. The Bulldogs commence league action on March 5 when they host Glendale.

Backing up Porras, who worked many innings in 2018, and will be asked to toe the rubber for 200 innings this season, will be junior Savannah Benson, Allie’s younger sister. 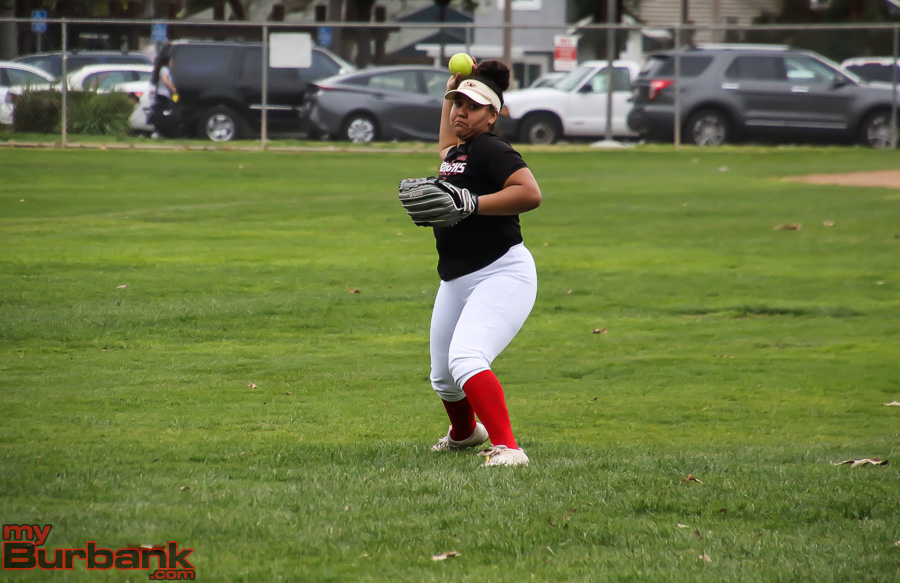 Chloe Bookmyer will be asked to be a team leader for the Indians. (Photo by Ross A. Benson)

A key member will be senior Alex Davis, who will be the primary shortstop.

Senior Amaya Broyls, a member of the volleyball team, will see the majority of the time behind the plate for Burbank, which lost to graduation first baseman Erin Lashkari, infielder/outfielder Anysia Gonzalez and outfielder/second baseman Macie Jensen.

Senior Nikki Davis and senior Carly Oldfield will battle for first base.

Senior Desiree Gomez is the primary third baseman and will relieve Broyls on occasion as the catcher.

Sophomore Erika Montoya, who played on the basketball team, will play second base. 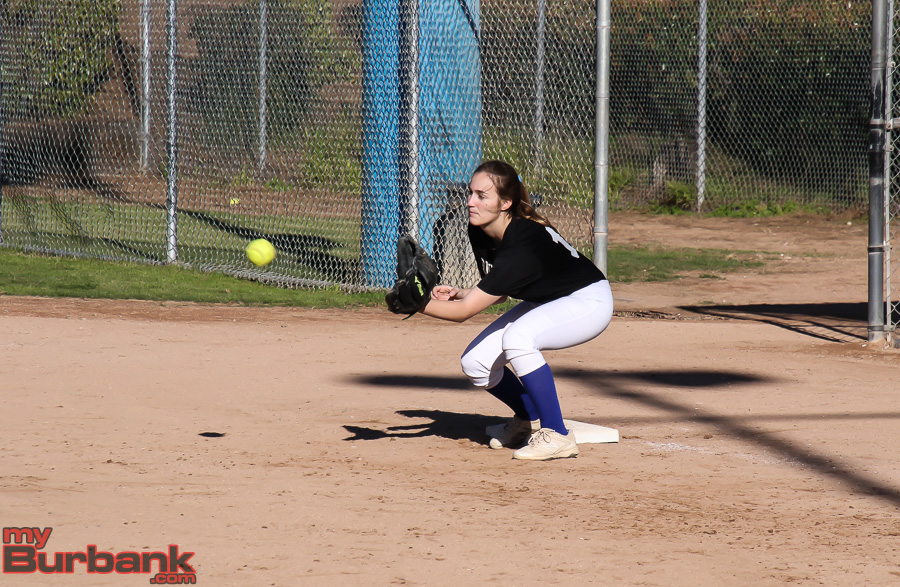 Burbank is aiming for the top spot in the Pacific League after finishing third last season. (Photo by Ross A. Benson)

The rest of the team includes senior Emily Monterrey, who also played on the basketball team, will play at first and third base and act as the designated player.

Senior Siena Fagiani will be used in a utility role and designated player, while freshman Bella Scozzola will play first base, third base and the outfield. 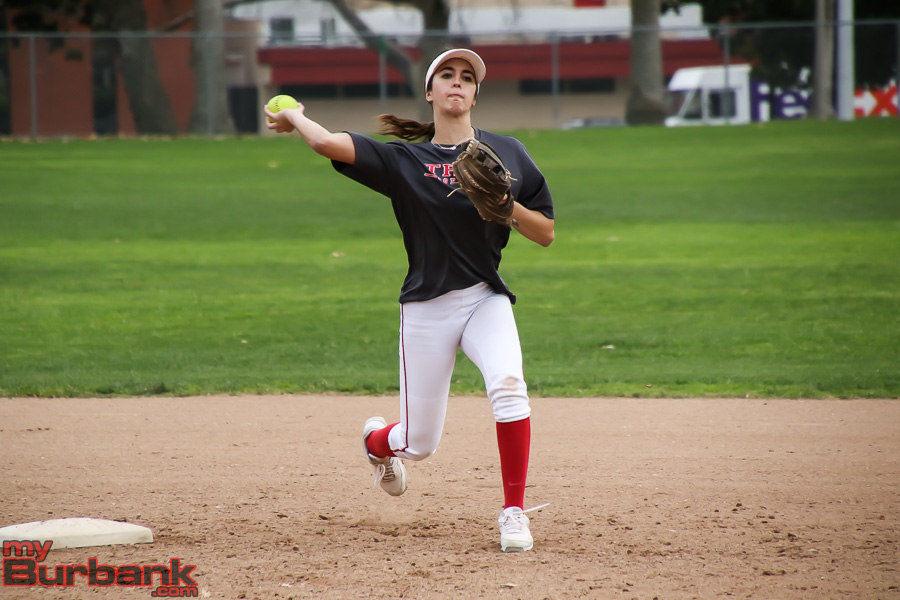 The Indians go over infield practice knowing its value. (Photo by Ross A. Benson)

The Indians have four starting pitchers and they will need to at least come close to what Miraglia, a member of the Long Beach State women’s softball team, accomplished in her stellar career.

The two with the most experience in the circle are junior Sidnie Dabaddie and junior Isabella Kam.

The other two hurlers are sophomore Dyani Del Castillo, who played on the basketball team and freshman Kelsey Acosta.

The catching chore will fall upon the dependable shoulders of senior Megan Williams.

The projected infield for Burroughs will have senior Sierra Harvey at first base, senior Morgan Mersola at second base, sophomore Alyssa Valenzuela at shortstop and junior Memorie Munoz at third base. 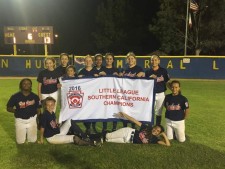 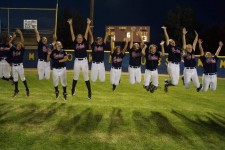