Over the course of a 10-game, regular-season schedule, there’s always some tough teams and a few others that aren’t as difficult.

For the Burroughs High football squad, when facing Glendale, it would fall in the latter category.

On Friday night at Moyse Field in the Pacific League opener, the Indians emerged with a resounding 49-6 win, but the opening half wasn’t as lopsided. 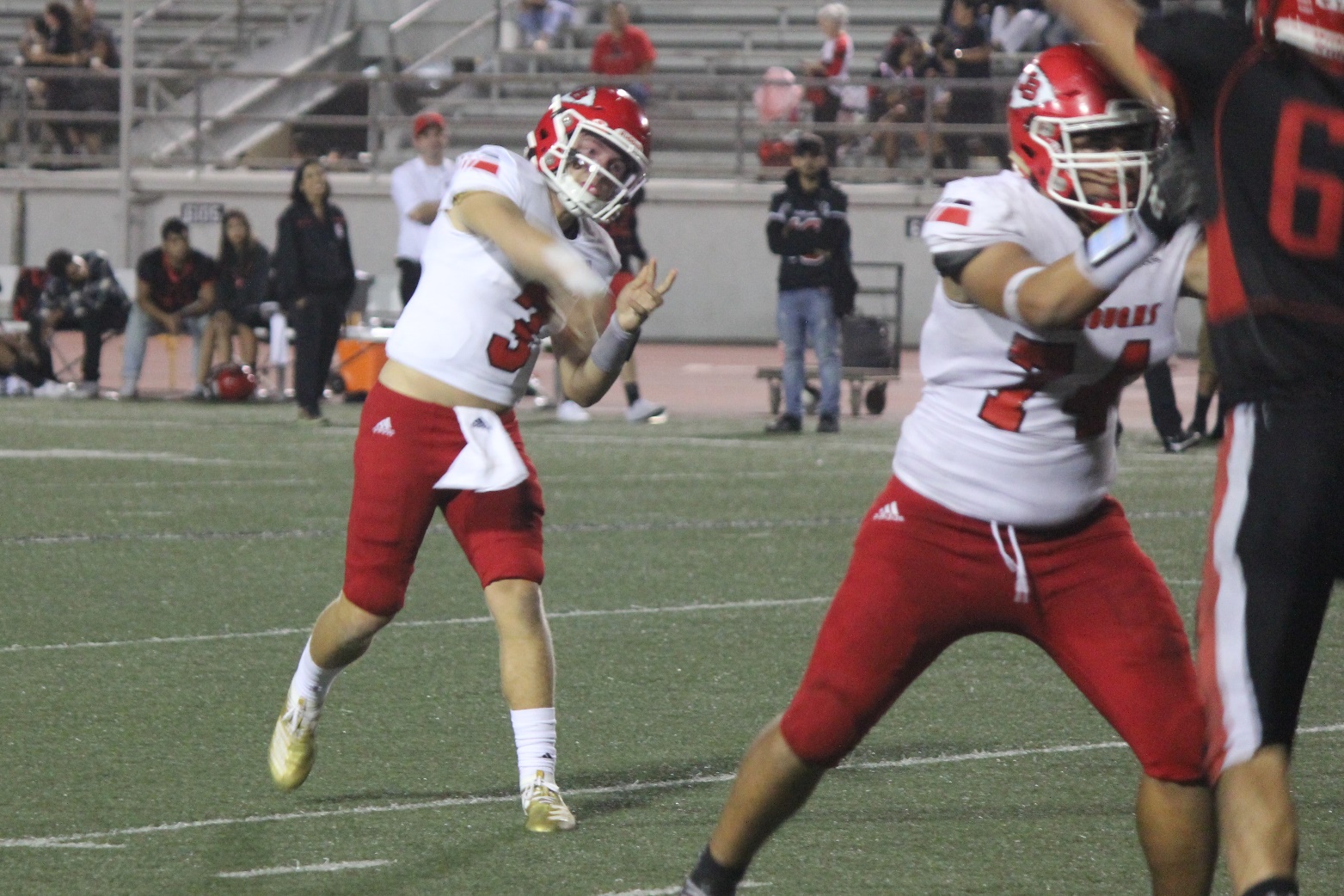 The Nitros, who now have a four-game losing streak, fell behind 20-6 at the intermission, but it could have been much closer if not for a terrific defensive stand.

Burroughs, which is an impressive 5-0 and ranked No. 9 in the CIF Southern Section Division XI, scored 29 unanswered points in the second half to blow the contest wide open.

“Glendale played with a ton of passion and a ton of heart and I respect what Cary Harris is doing with that program,” Burroughs second-year coach Rand Holdren said. “They pushed us in the first half and we put it together and played a ballgame.”

Holdren said the week of practice leading up to Friday’s match could have been better. 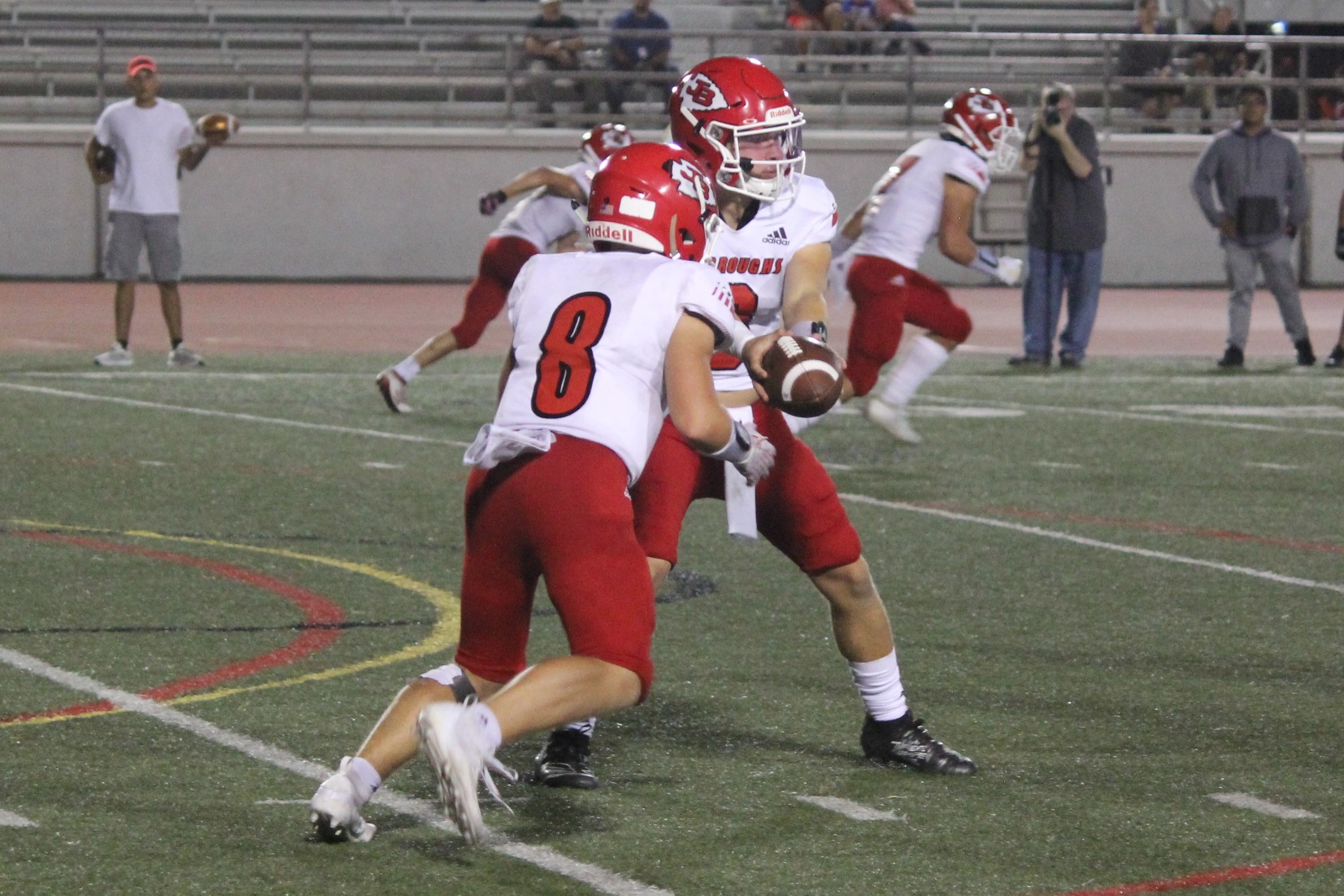 Garcia hands off to Jon English, who had a rushing score and a receiving touchdown. (Photo by Steve Garden)

“We’ve got to work on executing,” he said. “That’s been our theme all year. We got a little lethargic in practice this week. We’ve put together a lot of good weeks in a row. We’ve got to learn how to win.”

After punting on its initial series, Burroughs had the ball after a Glendale fumble. It took one play for senior wide receiver Aiden Forrester to race 50 yards with 9:07 on the clock for a 7-0 lead.

“Our practice weren’t the best and you practice how you play,” said Forrester, who had 72 yards on two carries and one catch for 87 yards. “We didn’t do well in practice. In the second half, we were able to pull it together for that, even though score-wise, we won the first half, they really won the first half because we were shooting ourselves in the foot with mistakes. I feel like in the second half, we came out and executed.” 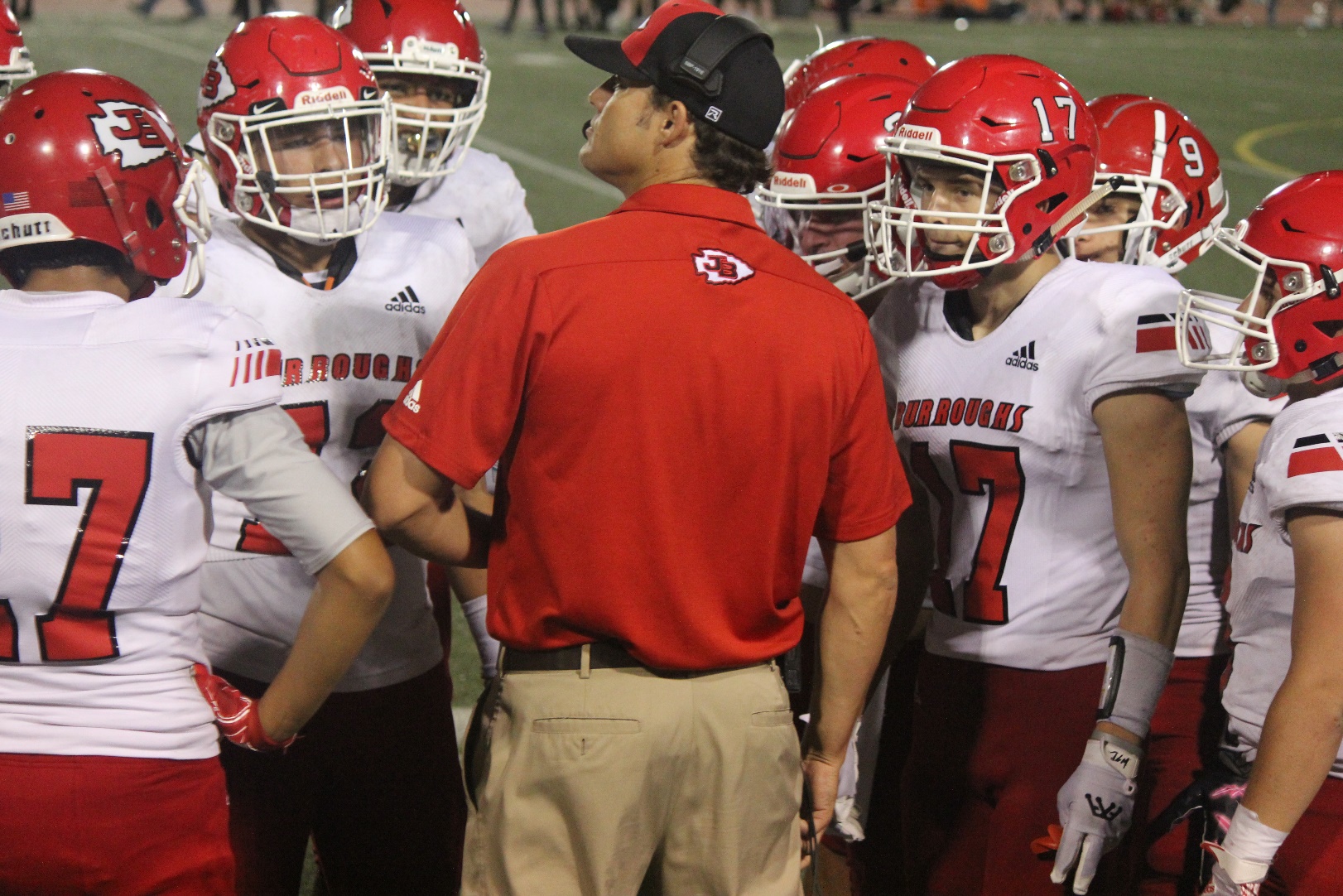 Burroughs coach Rand Holdren addresses the team during a time out. (Steve Garden)

The Nitros, who fumbled six times, fumbled on their next possession.

This miscue was turned into a 15-yard burst by sophomore running back Jon English (game-best 113 yards on 13 carries) that made it 13-0 with 5:35 remaining in the first quarter.

The Indians (5-0 and 1-0 in league), who had two fumbles, extended their advantage to 20-0 when senior quarterback Nicholas Garcia (six of 14 for 180 yards) drove his team from the Burroughs one-yard line and capped the march with an 87-yard strike to Forrester as 5:54 remained in the second half.

The Nitros (98 total net yards) cut the deficit to 20-6 when junior quarterback Juan Estrada (five of 12 for 66 yards) hit senior wide receiver Ethan Aldrete (two receptions for 46 yards) with a 31-yard toss as four seconds remained in the period. 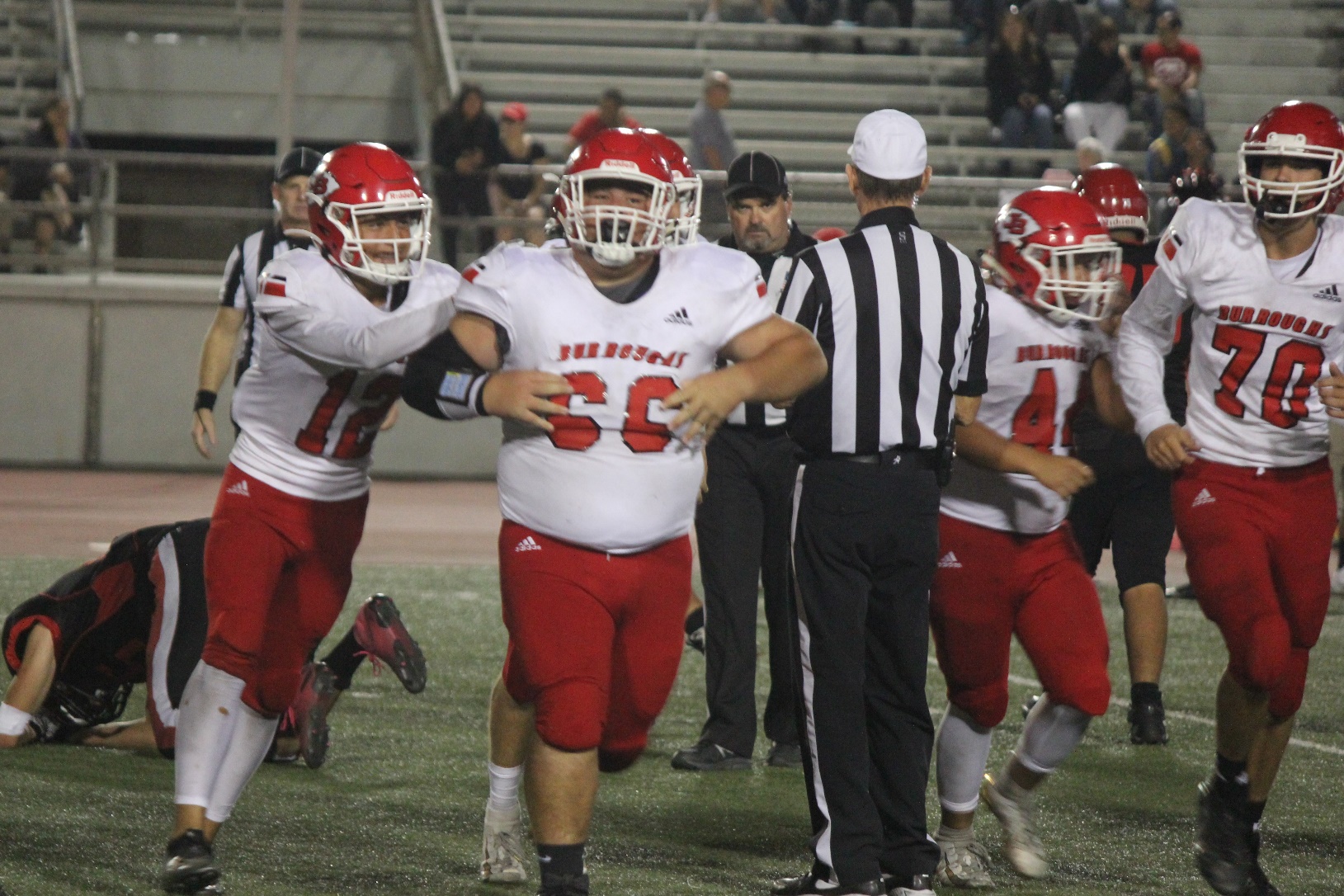 Lineman Isaac Reyes (No. 66) celebrates with his teammates after a key play against the Nitros. (Photo by Steve Garden)

Two possessions earlier, Glendale (1-4 and 0-1 in league) forced a Burroughs fumble at the Indians’ 48-yard line and marched to the one before Estrada was turned away on fourth down.

Early in the third period and the Nitros punting at their seven-yard line, the ball was snapped way over senior punter Edgar Ovasapyan’s head, who picked up the ball, but bobbled it.

Carson Cardenaz, a senior wide receiver/linebacker (30 yards on three catches), pounced on the ball and after Garcia (five rushes for 13 yards) ran the two-point conversion into the end zone, the Indians were ahead 28-6 with 9:22 left.

The next time Glendale had the ball, it was forced to punt as Burroughs (427 total yards) began its next possession at midfield.

It required just one play to score as Garcia tossed a well-designed screen pass to English, who raced 50 yards as 7:19 remained in the third period for a 35-6 edge.

After yet another Glendale punt, the Indians forged a 42-6 cushion when Garcia drilled sophomore wide receiver Vincent Harris with a 13-yard strike for his only catch as 1:37 was left before heading to the fourth quarter.

The Indians secured another Glendale fumble which was turned into a score as sophomore running back Carlos Andres Rodriguez (41 yards on 10 carries) found the end zone on a one-yard plunge, capping a five-play, 34-yard drive.

“Our main focus was to come out and execute and whatever the coach called, we were going to execute,” said senior offensive lineman Caden Cardenaz. “We ended up running a little bit more tonight and that’s what we did and we just executed.”

How can every player do better? “I watch film and I hope to communicate with other linemen and just work together to fix that up [mistakes] and make sure that we got the right calls so we know what we’re doing, so that we’re all on the same page, so that we can execute,” Cardenaz said.

The next league game will be Friday at 7 p.m. when Burroughs plays host to undefeated Crescenta Valley.

The last three years have not been easy for the Burroughs High football team as the Indians have failed to move on to postseason play, something that has not happened since the days of playing in the Foothill League more than a decade ago. 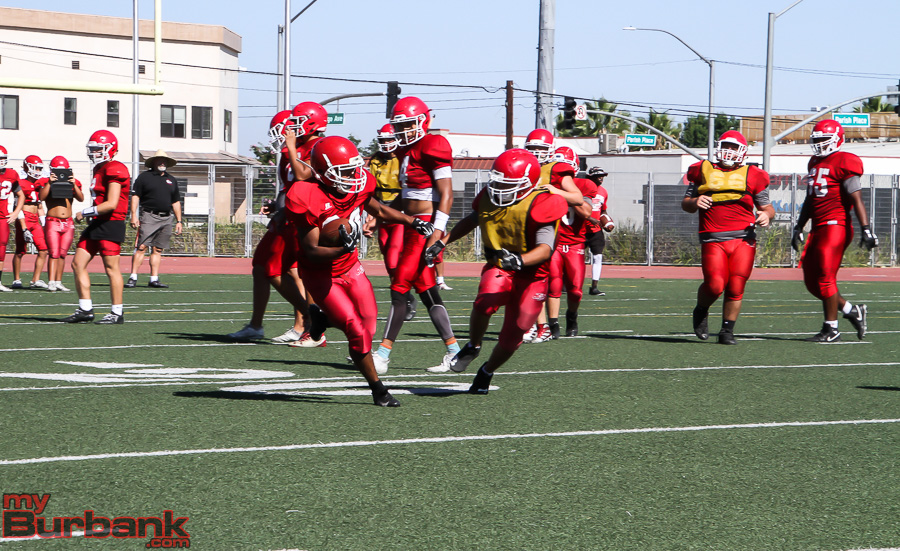 But the Indians plan to change that and get back to the days when being a regular playoff participant was customary.

Burroughs qualified for the CIF Southern Section playoffs eight of the first 10 years in the Pacific League after leaving the Foothill following the 2005-2006 school year.

“This team this year is a special group of guys that have come together. We focused on that in the offseason. We tried to build a cohesive group that, one wants to play together and two is having fun doing it,” second-year coach Rand Holdren said. “I think this team is capable of a lot of special things this year. It’s been a joy to coach this group. This staff has put in a lot of hours this offseason. I think it is the best staff in the Pacific League and they are giving their all and the kids have put (the work) in. It has been extremely productive this offseason.” 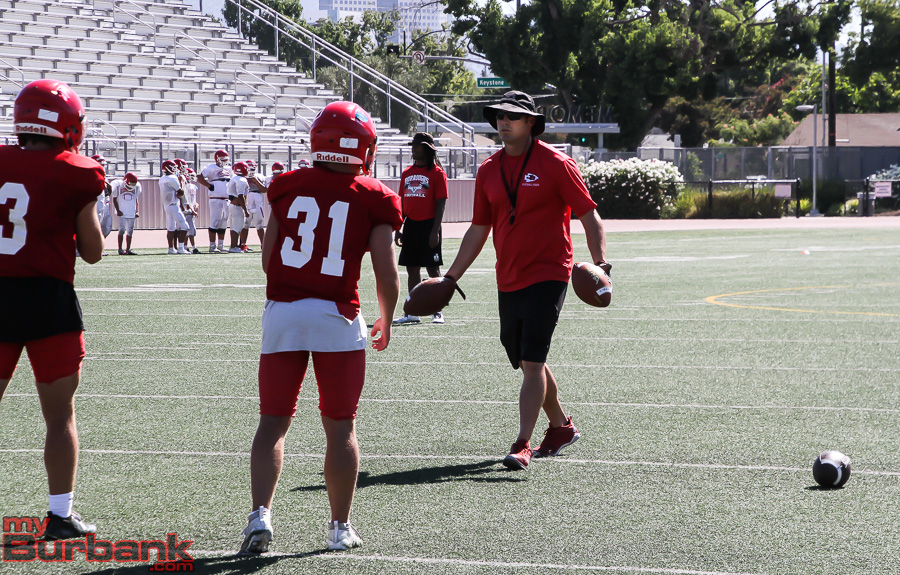 Burroughs was very young last year when it went 2-8. Thus the Indians have a lot of talent back from that squad.

Senior quarterback Nicholas Garcia (5-foot-10, 171 pounds) takes over the role full time this year after seeing time at the position last year and has greatly improved according to Holdren.

Seniors Aiden Forrester (6-0, 185) and Carson Cardenaz (5-10, 164) will play in the slot and offer quick options. Some may remember that Forrester returned the opening kickoff against rival Burbank for a touchdown last year. 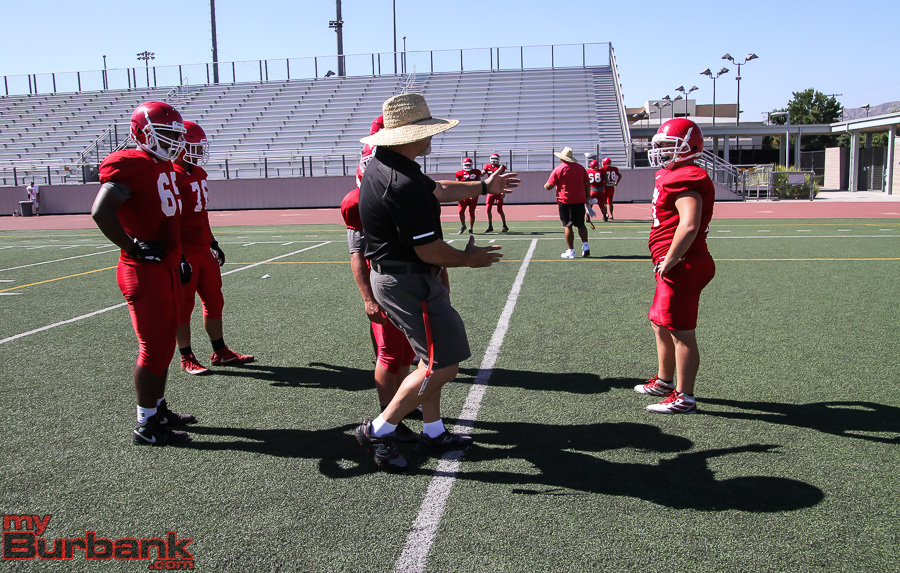 Defensively, the Indians are led by Forrester, who will start at safety. Simmons will also see time at safety. Senior John Alajijian (5-8, 140) should hold down a spot in the secondary along with Aldana-Pere. Seniors Clayton Stricker (6-0, 144) and Diego Castellon (5-6, 135) are two more solid defensive backs.

Diaz, who is a captain, will lead the group of linebackers. Carson Cardenaz also figures to be part of the linebacking crew, as will Rogers. 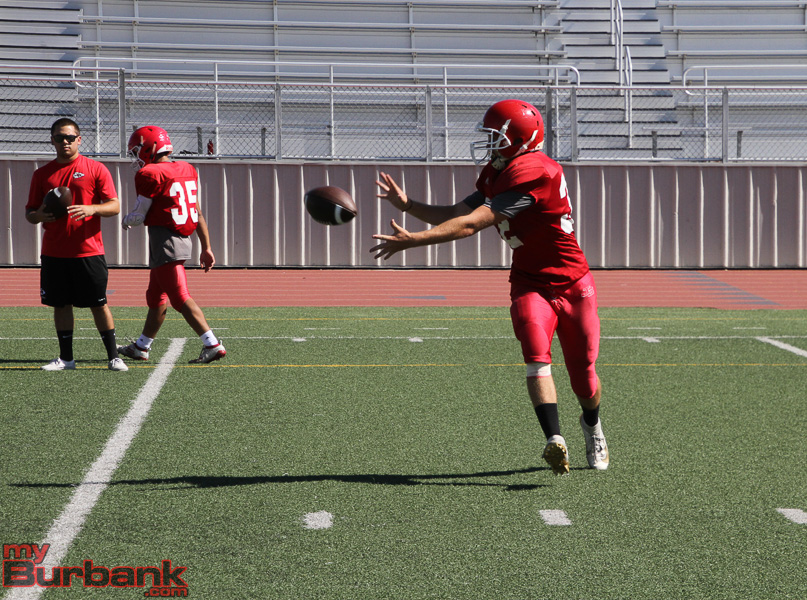 The defensive line will include many of the same players on the offensive line. Oliveros, Pentland, Sowers, and Quintero figure to be the key players rushing the opposing quarterbacks.

Holdren said he knows getting back to the playoffs won’t be easy, but he is optimistic.

“Burbank and CV are always going to be tough. Muir is stacked. You don’t know what is going on at Arcadia. That will be interesting,” Holdren said.  “I know Glendale has put in a lot of work this offseason. I like our chances in the league this year. This is going to be a fun year. This is an exciting team to watch.”