At the awards ceremony on Sunday, the cast and crew of the school’s production of Inherit the Wind were honored with the 2016 Artistic Merit Award. Each year this special award is given to the school that tackles difficult and important material with exceptional artistic vision. Congratulations to these talented drama and tech students! This, of course, wouldn’t be possible without all of the parent volunteers, the design team, and the wonderful collaboration of Jon King and John Benne.

Each participating school also enters three seniors in the Senior Acting Scholarship Competition where students must perform two contrasting monologues. Out of approximately 150 students, all three of the Burroughs entries made it to the final round (the top 12). Congratulations to Nick Apostolina, Daniel Beimford, and Madison Mayer. After the finals round, both Nick Apostolina and Daniel Beimford were awarded acting scholarships from the judges (they award 5 scholarships from the top 12).

Additionally, students entered a scene competition, and out of 15 scenes, they were awarded second place. Congratulations to Matt Bond, Daniel Beimford, Joe Ricciardella, and Sully Zack.

And finally, they also awarded JBHS with 13 certificates of Outstanding Performance:

If you would like to experience the talents of this amazing group first-hand, you won’t want to miss their upcoming production of the musical Hairspray on February 5th and 6th at 7pm and February 7 at 12pm. Ticket prices are as follows: Adults are $18; Students and Seniors are $10. Priority seating is available at $25 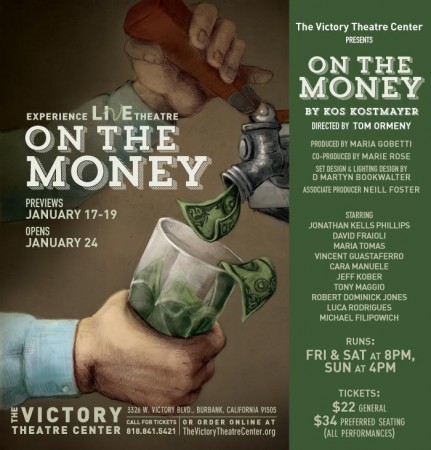 I recently had the pleasure of seeing the play, “On The Money” at the Victory Theatre Center in Burbank.

“On The Money” is a play that will leave the audience feeling emotionally altered, like they have just witnessed something that was painfully honest and eerily prescient.

In simplicity, the play is purely about money. It is a play that depicts what happens to good people when they are pushed to the extreme and hit a breaking point. It’s tragic, it’s honest, it’s humorous and it’s dramatic.

The sentiment echoes our current economic climate. So many decisions regarding life are based on money. It’s our greatest vice, but it’s almost impossible to live without. “On The Money” serves as a poignant reminder that good and honest people sometimes feel compelled to make difficult decisions regarding money in order to protect their family.

The play focuses on the characters Benny, Jake and Nancy. They work in a busy bar/restaurant and must report to their boss, Candy, the wealthy but frugal owner of The Black River Cafe. Candy quickly becomes a clear representation of white-collar America, and more importantly, the wealthy individuals who get away with tax evasion and fraud, while Benny, Jake and Nancy represent the American majority, the backbone of America. These hardworking individuals seem to be in a place of constant struggle and are doing what they can to support their families.

The play, written by Kos Kostmayer and directed by Tom Ormeny, is remarkably foreboding and beautifully impactful. Kosmayer tells a tale with such important underlying messages about money and America, that regardless of partisan politics, it is impossible not to understand the characters’ plight, because these characters represent ourselves. Kostmayer weaves drama and comedy into one very realistic piece of work. His characters speak like we would speak, and feel like we would feel. The story is authentic, and perhaps, it is so impactful because it could happen to any one of us.

Nancy (Maria Tomas) is a heartbreaking character. She is a courageous and fierce mother, a woman who will truly do anything for her child. However, her plight becomes more complicated when she agrees to go to extraordinary lengths to make money to keep her child safe. Her determination, while a beautiful attribute, is also her biggest flaw.

Jack (Jonathan Kells Phillips) radiates goodness. He is a loving husband and father who, while stressed about not paying back his loans on time, is persistent in his belief in making an honest living, even if it means making a less than desirable wage. His breaking point is what energizes the entire story.

Benny (David Fraioli)  is problematic from the start. A kind and good man at heart, he is tired of being pushed down by the wealthy and is ready to do something about it.  He is extremely critical of capitalism and trickle-down economics, and feels the system is shameful. He doesn’t want to live his life on the edge of financial ruin, and feels he is entitled to a better living. His conviction is the most powerful, because he is the most sure of his actions.

Candy (Vinny Guastaferro) has goodness within him, but it is hidden by his greed. His business is his everything, and he will do whatever it takes to be successful and make money.

Candy’s abrasiveness and unwillingness to pay his employees a higher wage is what ultimately pushes his employees to the edge, causing them to make a decision that could change their lives.

“On The Money” features only 10 characters, and each and every one is important to the story. From the main leads, to Wallace the loan shark, to the chilling Johnny B, to the humorous foreigner and drunk bar patrons who add some comedic relief while building tension, it is clear that everyone has a place.

However, a play is only as strong as its acting, and “On The Money” features superbly talented actors who truly embody their characters. Never have I seen such a strong cast, where every single actor, and character for that matter, really plays an important part in the narrative. The cast portrays their characters with such nuanced acting that their emotions are almost palpable.

Perhaps the most notable of the cast is Jeff Kober, who plays the loony but sagacious T.C. Hopper. Kober commands the stage as soon as he sets foot in the bar. At first, it seems as if he is talking in circles, and at first impression, it seems he has a screw loose; but when you listen closely, it becomes clear that T.C. Hopper is perhaps the wisest person in the room.

The Victory Theatre Center has done a remarkable job with this production. The set is beautiful, the staging is realistic, the script is meaningful and the acting is impactful. But most of all, it is clear the founders and artistic co-directors of The Victory Theatre Center, Maria Gobetti and Tom Ormeny, give all of themselves to the theatre and to its productions. They are passionate about the project and warm and welcoming to the theatre’s patrons, bringing the love of art and storytelling to our community. 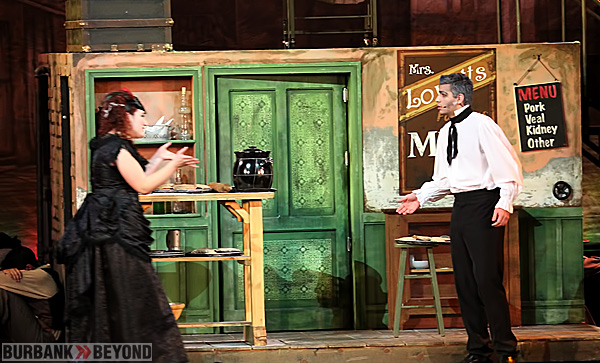 The combined drama, vocal and instrumental departments of John Burroughs High School presented the award winning Broadway musical, “Sweeney Todd, The Demon Barber of Fleet Street”, as the 5th collaboration of the departments and their most ambitious yet!  Set in 19th century London, this musical thriller tells the gruesome, grisly tale of the murderous barber Sweeney Todd who returns from exile to seek revenge on the judge who falsely put him away. Teaming up with Mrs. Lovett, the owner of a struggling pie shop, his thirst for blood expands to include his unfortunate customers and the whole human race.  And Mrs. Lovett finds some new ingredients for her savory pies. Winner of the 1979 Tony Award for Best Musical, Sondheim’s masterpiece includes the deliciously wicked songs “A Little Priest,” “Pretty Women,” and “Not While I’m Around.”  Everyone seeks revenge, but seldom as well as Sweeney Todd. 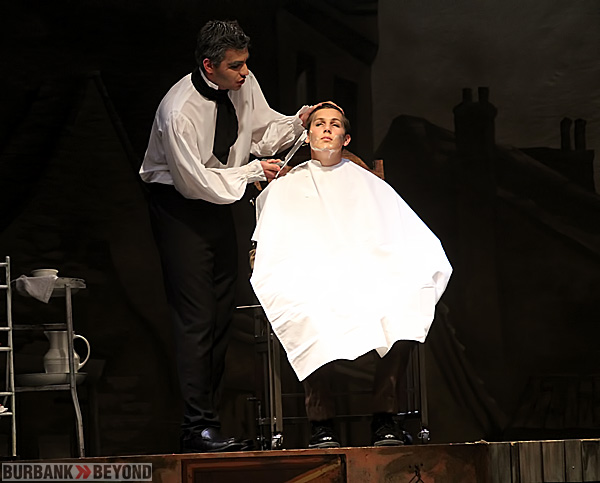 Featuring John Oreshnick as Sweeney Todd, Joe Leone as Anthony Hope, Bronwen Capshaw as Mrs. Lovett, Nevada Brandt as the Beggar Woman, David Jurbala as Judge Turpin, Avery Ball as The Beadle, Kelsey Reynolds as Johanna, Josh Strobl as Tobias, Ragg and Miles Gonzalez as Pirelli, the difficulty of Sondheim’s music is giving the students one of the most challenging, creative opportunities of their high school careers.  It will also be the biggest orchestra they have ever had, made up of students and professionals, who will mentor the students in the orchestra pit.  This show also provides numerous technical challenges and demands as it features one of their most elaborate sets, with a full rotating central unit and many additional pieces. 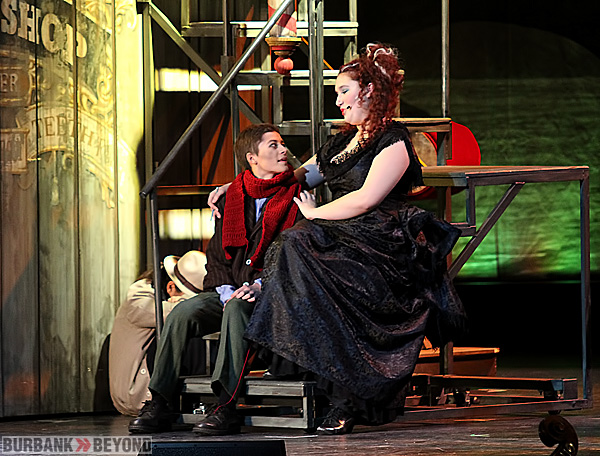 The show also offered the students an opportunity to explore the darker side of musical theatre, handling serious material in a mature way.  Sweeney Todd is recognized as a classic of modern musical theatre and the opportunity to dive into the brilliance of Sondheim is a benefit for the JBHS Performing Arts Department students as singers, actors, and musicians.  The musical is such a popular choice with high schools, that Stephen Sondheim, himself, even rewrote lyrics for the high school version, which is what they will be performing. The production was under the combined direction of teachers Guy Myers (drama) Brendan Jennings (vocal) and Tana Barnett (instrumental). 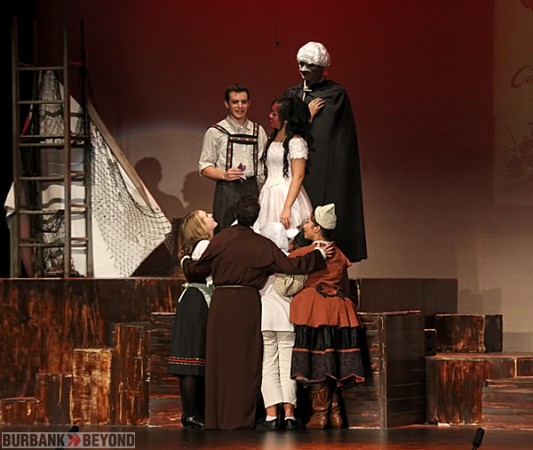 Burbank High School’s Theatre Dept. presented Candide Thursday, Friday and Saturday evening in the schools auditorium. Candide, written by Scott Hunter with more than a dozen actors and actresses, was directed by Brooks Gardner and his wife, Ann.