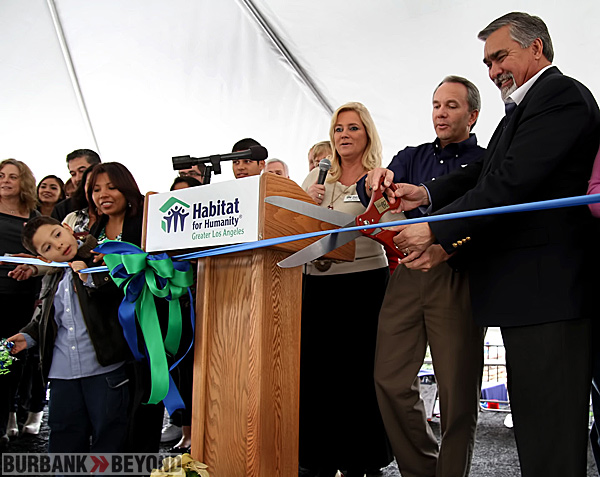 For most families Christmas comes with a pile of brightly wrapped presents under a tree.  However on Saturday, eight Burbank families received an early Christmas present in the form of new homes built by Habitat for Humanity of Greater Los Angeles.

According to Ruth Martinez-Baenen, Board Member of the City of Burbank Housing Corporation, and partner with Habitat for Humanity in the Burbank Keeler/Elliot Development Project, “Everybody deserves an affordable place to live.”

The project kicked off in March 2011, with the first walls raised in May 2011.  More than 5000 volunteers participated in building the new homes, in partnership with the Burbank Redevelopment Agency, Lowe’s, The Walt Disney Company,  Bernard’s, and Celebrating Homes.  Each home was built using the highest quality construction  standards, including energy efficiency meeting both Energy Star and LEED standards.

The effort resulted in the final delivery of a renovated two bedroom home (nicknamed the Centennial  House), a duplex, and an additional five unit building.

“We are very blessed,” said Eliseo Atayde, new owner of house #6.  “We deeply thank the City of Burbank Housing Corporation and Habitat for Humanity for making us part of this project.”

Erin Rank, President and CEO of the Greater Los Angeles area chapter of the Habitat for Humanity, noted that  they have now completed nearly 400 homes in Los Angeles County.

“We’re excited to give residents of Burbank the opportunity of home ownership” said Rank, “The city is dedicated to making the community better.  Habitat is just coming in to be a part of that.”

Mayor Talamantes commended the project, adding “I am impressed with Habitat’s approach to construction projects, and the way they fully engage and involve the community.  I would like to thank Habitat for partnering with us, changing the lives of these wonderful families, while adding to the city’s revitalization efforts.” 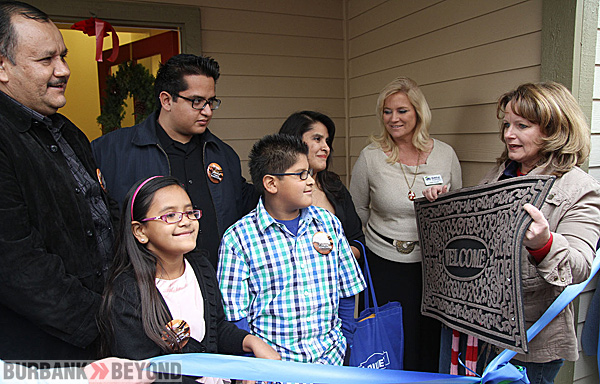 The Atayde Family gets their first house warming gift for their new Burbank Home. (Photo by Ross A. Benson)

“Finally I have a home,” exclaimed Boutros, new owner of house #1,  “It is really, really a dream come true.”

Father David Elias, of St Mary & St Athanasius Coptic Orthodox Church, provided a blessing for Boutros’ home, stating “it is incredible to see one of our congregation, one of our families, have a placed they can be comfortable in and actually consider a home.”

If those requirements are met, and the family is selected, then they are eligible to purchase a Habitat home on a 30 year, no-interest loan.

Josue Atayde, son of Eliseo Atayade the new owner of unit #6 solemnly reflected “It really feels good to have the security of a home.  I’ve always felt proud to be part of the Burbank community.  I now have a strong desire to give back to the community, as they have given me so much.”

Learn more about the Habitat for Humanity of Greater Los Angeles at www.habitatla.org

The Community Develop Agency and Burbank Redevelopment Agency held a fundraiser for the local Habitat for Humanity project which is taking place on Keeler St. Several Gourmet Food Trucks parked on a closed off portion of Third Street adjacent to City Hall last Thursday for an early morning breakfast and lunch.  A portion of the proceeds was donated by each Truck back into the Habitat for Humanity project. The Burbank Redevelopment Agency selected several rundown and dilapidated condos and a house to renovate (check video) with 10 lucky families awarded the new houses in a very long selection process.

BurbankNBeyond’s Robert Vincent and Steven Lynch were out at the event. The street team talked to the truck owners, Community development agency, and even Mayor Reinke to bring the story straight to you. Watch the video now:

Habitat For Humanity Los Angeles, and Burbank Housing Corporation gathered 8 families Monday evening, at Burbank’s Community Services Building on what they thought was another mandatory meeting as part of the selection process to become new home owners, but were totally surprised when it was announced that they have been approved as the newest residents that will be able to call Burbank their home.

The families gathered for pictures and were presented flowers, a scrapbook and a hammer as they will have to participate in the building process of their new homes. The Keeler/Elliott Homeowner Development will break ground shortly

Habitat for Humanity of Greater Los Angeles is teaming up with the Burbank Housing Corporation and the Burbank Redevelopment Agency on a new affordable housing development in Burbank. The Keeler/Elliott Homeownership Development is an 8-unit development that will include the construction of 7 new townhouse units and the rehabilitation of an existing single-family home. The goal of the project is to build decent, sustainable and affordable homes for eight very low-income, hardworking families and individuals in Burbank. The three entities are developing eight new homes in an underserved area of Burbank, called the Peyton-Grismer Focus Neighborhood. Qualified applicants meet income requirements, have good credit and demonstrate the greatest need. Additionally, homeowner families agree to the organization’s “sweat equity” requirement of up to 500 volunteer hours, including building their home. Since 1990, HFH GLA has built and renovated over 350 homes in greater Los Angeles and over 300 more around the world.