An offensive tsunami in the second half and a suffocating defense in two of the four quarters were at the crux of the Burroughs High boys’ water polo team routing host Burbank 20-7 in the Pacific League regular-season finale on Wednesday afternoon in front of a jammed-packed audience.

Seven players scored for the Indians (11-6 and 4-2 in league), but none stood taller than senior utility Vahagan Sahakyan, who chimed in with a match-best nine goals, including seven in the second half when Burroughs outscored Burbank 15-2. 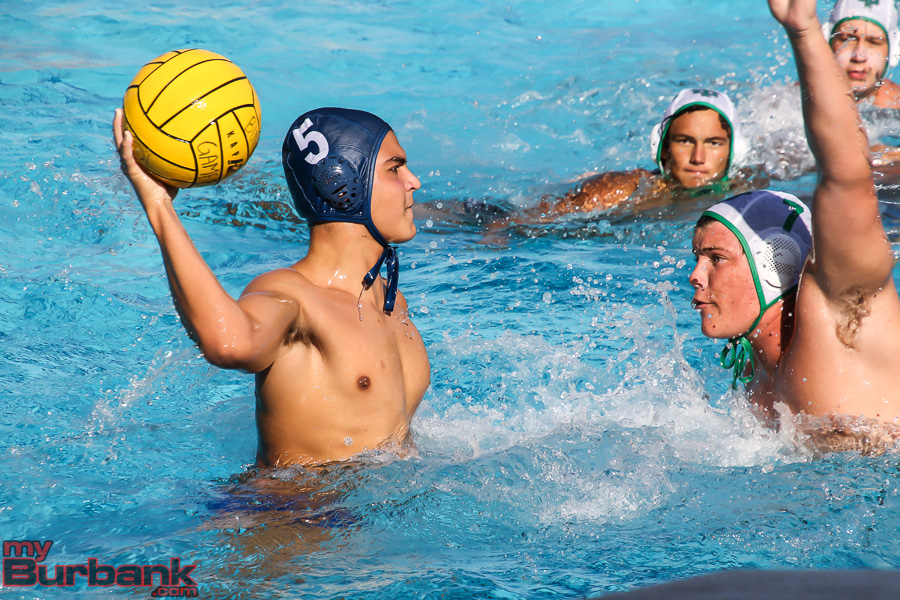 Burbank’s Pavel Tantchev, shown in a recent Pacific League match, scored a goal against Burroughs. (Photo by Ross A. Benson)

“We just yelled at them a little bit, stuff they were getting complacent on,” Burroughs coach Jacob Cook said of the second half offensive deluge. We got it together.”

Not too far behind was sophomore utility Xavier Turla, who added six goals for the Indians, who shut out the Bulldogs in the first and fourth quarters.

The Indians led 5-0 heading into the second frame, but the Bulldogs (5-12 and 1-5 in league) dropped in five goals and evened it at 5-5 at the intermission.

Junior utility Ryan Jaramillo’s six-footer with 5:16 left was the first tally of the match before Turla buzzed in one from 10 feet with 2:39 left to make it 2-0.

Burroughs slid ahead 5-0 on Sahakyan’s tally and 6:38 left in the second frame. Burbank (2-14 and 1-4 in league) scored the next five goals as junior driver Grigor Gasabian nailed a 10-footer as 6:08 remained.

The Indians were tied 5-5 at the half with the Bulldogs, but exploded for 15 goals in the second half. (Photo by Ross A. Benson)

Sophomore driver Pavel Tantchev scored on a 10-foot laser and 3:50 left and was followed by a 12-footer with 2:24 on the ticker by sophomore driver Jonathan Agazaryan.

Gasabian’s 20-foot tally with 47 seconds left made it 5-4 while Agazaryan 12-footer found the back of the net 28 seconds later that knotted it at 5-5.

“We weren’t responding to their counters,” first-year Burbank coach Mike Lucero said. “We were in the game. They [Burroughs] kept scoring off of every counter.”

How did the Bulldogs rally in the second quarter? “They were moving more and they were running the plays they were supposed to run,” Lucero said.

The Indians came out and scored the first four goals of the third quarter and led 9-5. Sahakyan’s point-blank goal with 6:03 left made it 6-5 and junior utility Alex Lewin’s two-footer with 5:23 showing pushed the advantage to 7-5.

Sahakyan’s point-blank shot with 4:50 remaining saw the Indians dart in front 8-5 and Turla’s three-footer made it a four-goal lead and 3:29 remaining.

The Bulldogs broke the spell when senior driver Kouroush Dolatshani knocked in an eight-footer with 2:42 on the clock as Burbank came within 9-6.

Two goals followed for the Indians as Sahakyan’s 10-footer with 1:36 left made it 10-6 and senior attacker Tobey Ho’s five-footer 27 seconds later extended the lead to 11-6.

Sophomore driver Avo Barsegyan scored from 12 feet for the Bulldogs as 26 seconds remained that made it 11-7, while Sahakyan’s 12-footer five seconds later pushed it to a five-goal lead.

An eight-goal outburst highlighted the fourth quarter as Sahakyan and Turla each scored three goals.

Turla’s six-footer with 4:53 on the timer made it 15-7 and Sahakyan’s eight-footer 17 seconds later expanded the advantage to 16-7.

Turla’s six-footer 39 seconds later extended the Indians’ lead to 10 goals. Senior attacker Chet Conlan’s close-range goal with 2:50 left made it 18-7 and Turla’s point-blank tally with 1:53 on the clock shoved the Indians ahead 19-7.

Junior utility Miguel Martinez capped off the offensive outburst with a six-footer as 41 seconds remained.

Senior Arthur Eldridge and senior David Karagezyan each played exceptional in goal for Burroughs, while Burbank senior net-keeper Sarkis Terpetrossyan was under duress for much of the day.

The next order of business for both schools is the league tournament which begins on Tuesday at Arcadia and concludes on October 31.

This is Mike Lucero’s first year as the Burbank High boys’ water polo coach and in time hopes to build a competitive program.

One of the steps needed to help solidify this desire is to face top-notch competition like Thousand Oaks, which came to the Bulldogs pool on Monday afternoon for a nonleague match. 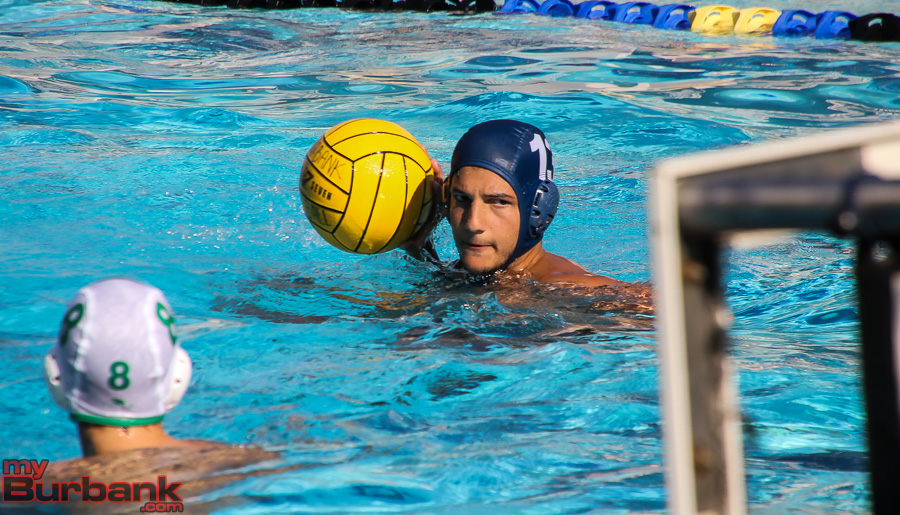 Though the Lancers raced off to a commanding lead, they were hard-pressed in the second half by Burbank, but eventually won 16-11.

Thousand Oaks (14-3) scored four goals in each quarter while the Bulldogs (4-6) were shut out in the first quarter.

“We definitely kind of pressed more because defense wins championships,” Lucero said of his team during the match. “We’re capable of doing that. We scored four goals in one quarter. We’ve got to stay focused.”

Still, Lucero liked what he saw. “Thousand Oaks is a strong team. We definitely weren’t intimidated. Our goal within the next year is to be at that level,” he said.

Pavel Tantchev scored two goals for the Bulldogs, who were only outscored 8-7 in the second half. (Photo by Ross A. Benson)

Junior Conner Halvorsen paced the Lancers with five goals, including three in the opening quarter when Thousand Oaks led 4-0.

Senior Carsen Peyton’s seven-footer with 2:49 left put the Lancers ahead 3-0 and Halvorsen’s 10-foot strike with one second on the clock pushed the advantage to 4-0.

“It was a good contest so it stayed within about three or four goals the entire game,” Thousand Oaks coach Zach Graper said. “We got to see a lot of people that hadn’t had a lot of opportunity step up and come into more contributing roles. These are games that will help us a lot come playoff season.” 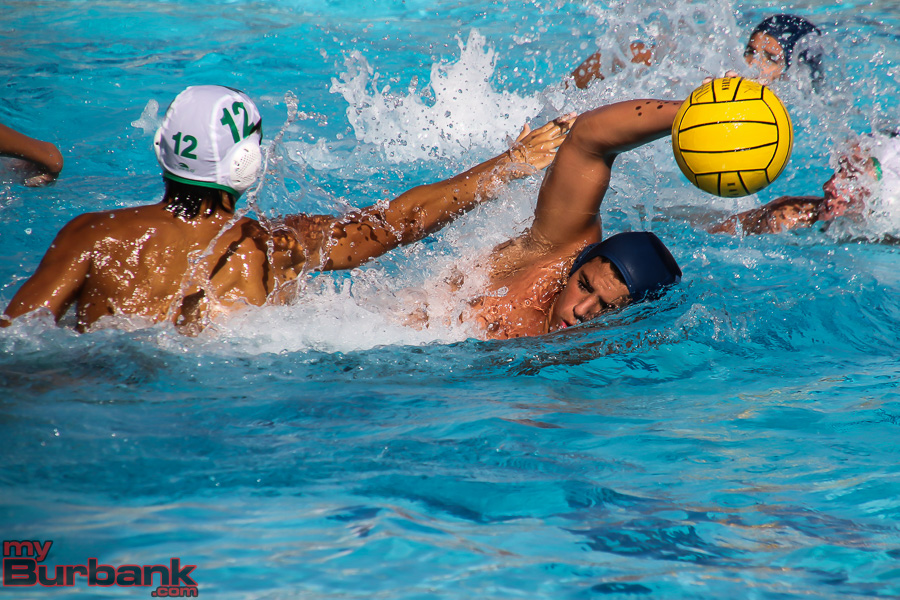 Graper then added: “We’re missing three starters and the boys really stepped up and was ready to play,” he noted. “We got a great level of depth. It was a lot of fun. Burbank really showed a great contest.”

Thousand Oaks then took control 6-0 on back-to-back goals from junior Greg Olsen on a 10-footer with 6:08 left and a five-footer with 4:54 showing.

The spell was finally broken when Kharazyan connected on a five-footer with 4:40 left and a six-footer, 22 seconds later.

Each team divided the next four goals as Halvorsen drilled a 10-footer with 1:58 on the ticker that made it 7-2 and senior Dylan Hearst canned one from 18 feet and 14 seconds left for an 8-4 edge. 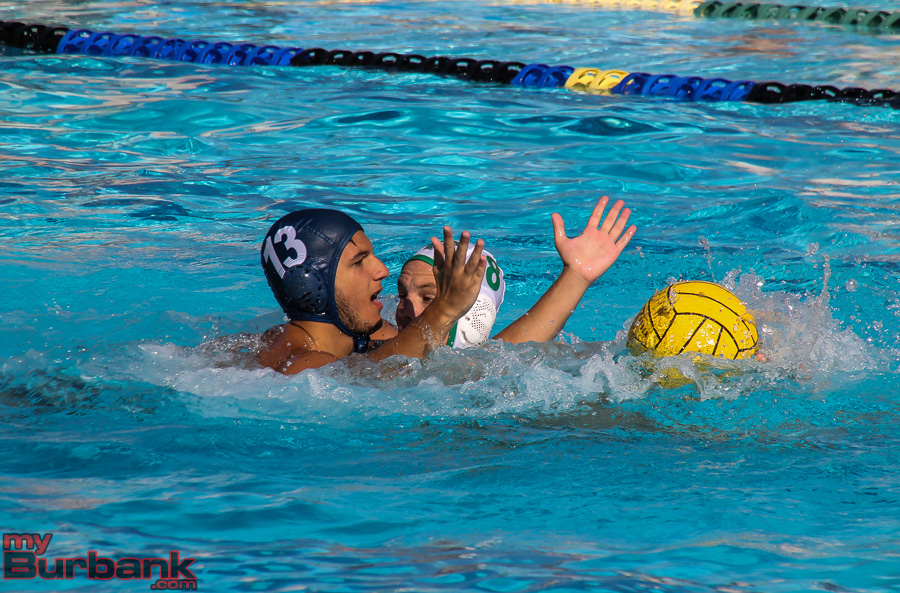 Sandwiched in between were two goals from sophomore driver Pavel Tantchev that came with 1:24 and was from 12 feet that cut the lead to 7-3 and a six-footer with one minute showing as Burbank drew within 7-4.

The Lancers outscored the Bulldogs 4-3 in the third quarter as senior Maison Van Item scored from point-blank range and 6:42 left for a 9-4 margin and Halvorsen’s 12-foot laser with 4:22 remaining for a 10-6 lead.

Agazaryan scored all three tallies for the Bulldogs in the third quarter and they included two from point-blank range and came with 5:23 left that sliced the Lancers’ lead to 9-5 and with 4:41 on the clock as the Bulldogs drew within 9-6.

When Agazaryan drilled a 12-footer with 1:04 remaining, Thousand Oaks’ lead was lowered to 12-7.

Agazaryan poured in two goals in the fourth quarter that included a six-footer with 4:22 left that trimmed the lead to 14-9 and an 18-footer with 45 seconds remaining that sliced Thousand Oaks’ lead to 16-11.