Amid the worst pandemic since 1918 when the Spanish Flu infected 500 million people or roughly one-third of the world’s population, COVID-19 has wreaked its own havoc globally.

But despite this virus, Breakthrough Sports, which was founded by Champ Baginski, has flourished this week during its five-day, three-hour youth baseball camp at McCambridge Park. 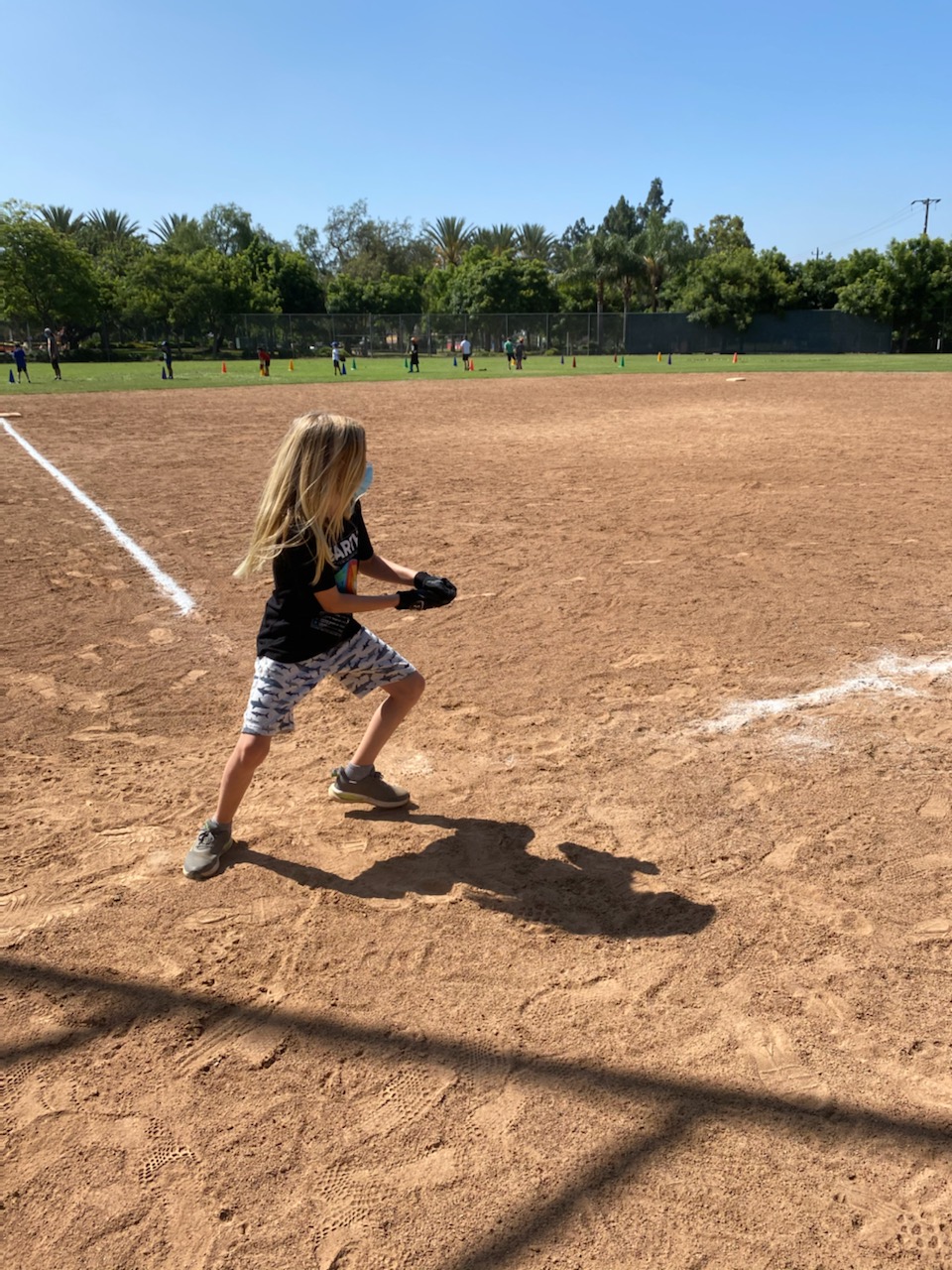 Ella Burkhardt, 11 years old and the only girl among the 20 campers, shows off her skills. (Photo courtesy Mike Graceffo)

The camp, in conjunction with the City of Burbank and the Parks and Recreation Department, is open to boys and girls, ages five through 14 with a maximum of 20 campers because of the coronavirus.

All of this was made possible because the camp follows all of the CDC [Centers For Disease Control] and state guidelines that include every camper and coach having their temperature checked, social distancing, no intermingling, wearing protective face masks and wearing a surgical glove on their throwing hand.

“We’re following the same protocol that the [Burbank] day-camp has followed and it’s been going on since June,” said Jon McGinley, the Burbank Parks and Recreation Supervisor for Youth Sports. “Everyone gets their temperature checked before they are allowed on the field. Everyone has to wear masks and that includes the coaches, everyone has their own equipment [baseball glove and bat] and the parents are not allowed on the field.”

Baginski has been involved with professional sports teams like the Los Angeles Clippers, Anaheim Ducks and the current and two-time Super Bowl champion Kansas City Chiefs, for more than two decades. 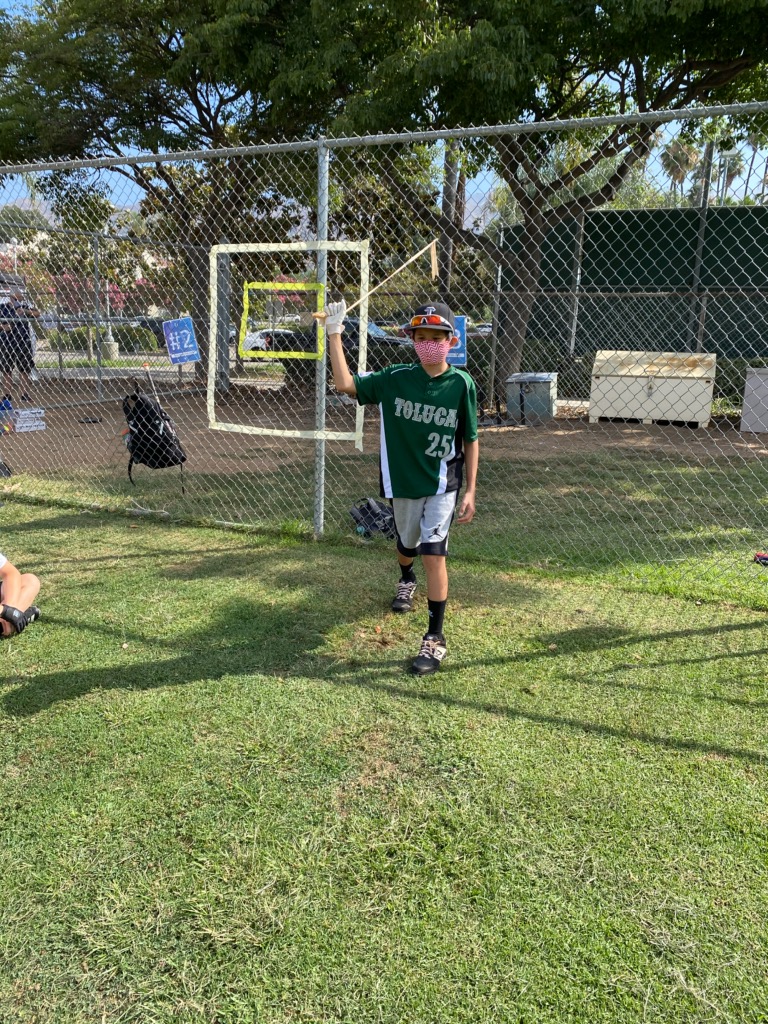 “At the professional level, it is always about money,” Baginski said. “But it was always my goal when I founded Breakthrough Sports, to do something that is more community based. I wanted to make these camps accessible to people of all walks of life. Last year, we had between 3,000 and 4,000 kids at our camps.”

Breakthrough Sports has brought its elite sports programming to 13 cities in Southern California, including Burbank.

In addition to being the founder of Breakthrough Sports, Baginski is one of the baseball coaches along with Mike Graceffo, who is currently the Burbank High freshman baseball coach.

“With everything that is going on, it’s nice that these kids can come here and learn the fundamentals of baseball,” said Graceffo, who works part-time at the Burbank Boys and Girls Club. “For three hours [9 a.m. to noon], they can get out and have fun and get a sense of normalcy.” 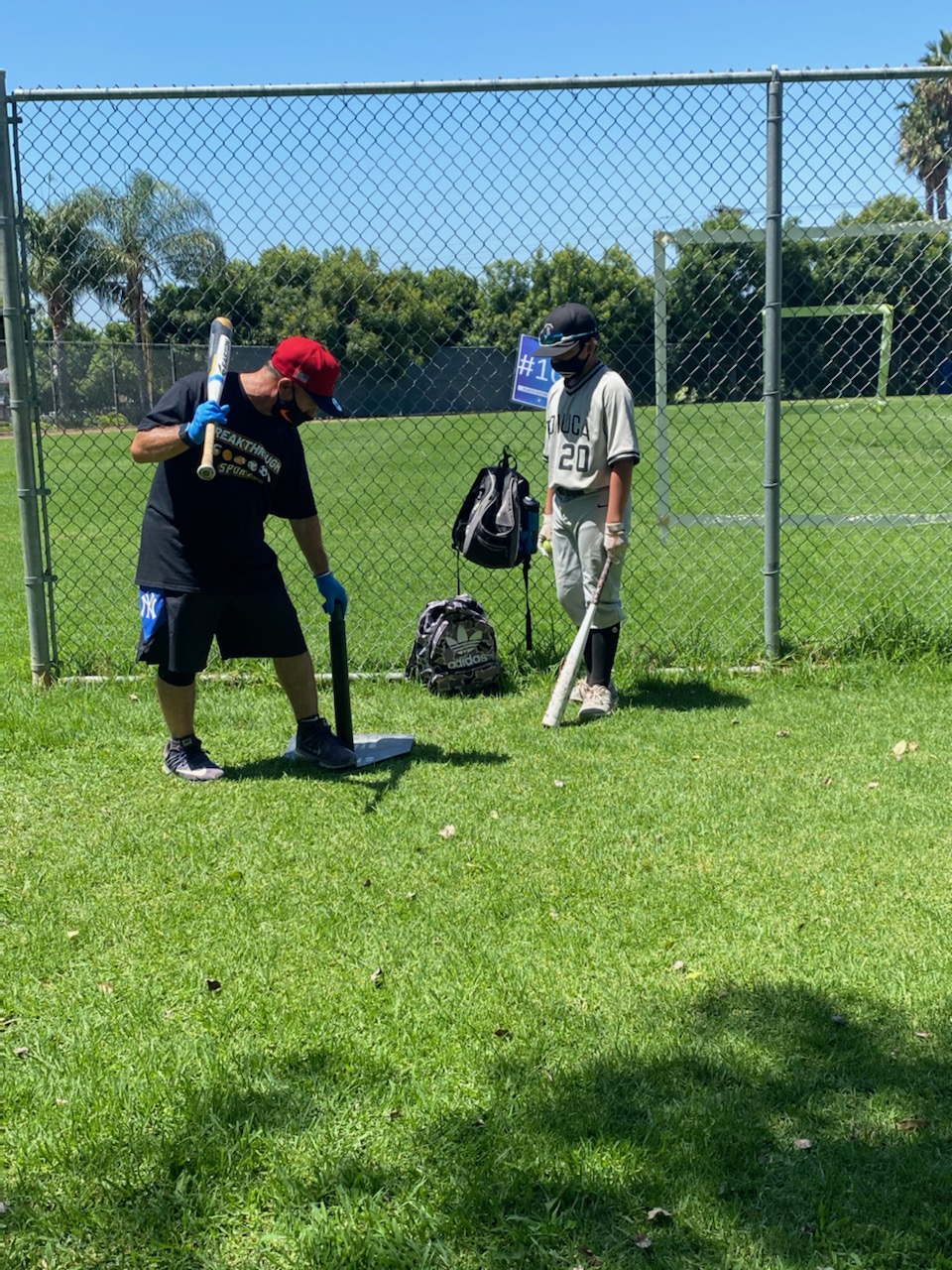 Simon Suarez, 13, lives in Burbank, plays on a travel-ball team and hopes to play high school baseball for Burroughs.

“It’s really fun to come to this camp,” he said. “I like it because you can see improvement. I want to get better.”

Jackson Taylor, 12, resides in Burbank and also hopes to improve his baseball skills.

“My mom wanted me to go outside and play,” he said. “I’m a little rusty. I haven’t played baseball in about a year. But I want to get better.”

Leo Beebe is 11 and a Burbank resident. “I’m having a lot of fun and I’m getting better at baseball,” said the second baseman and catcher. “In the games, I like baserunning. I like fooling the pitcher.”

Ella Burkhardt, 11, lives in Burbank and is the only girl among the 20 campers. “I’ve never played baseball. But it’s fun to get out. I like when we throw and catch and I like over-the-line,” she said.

Ryan Beltran is eight, resides in Burbank and despite his youth, has been to three or four baseball camps. 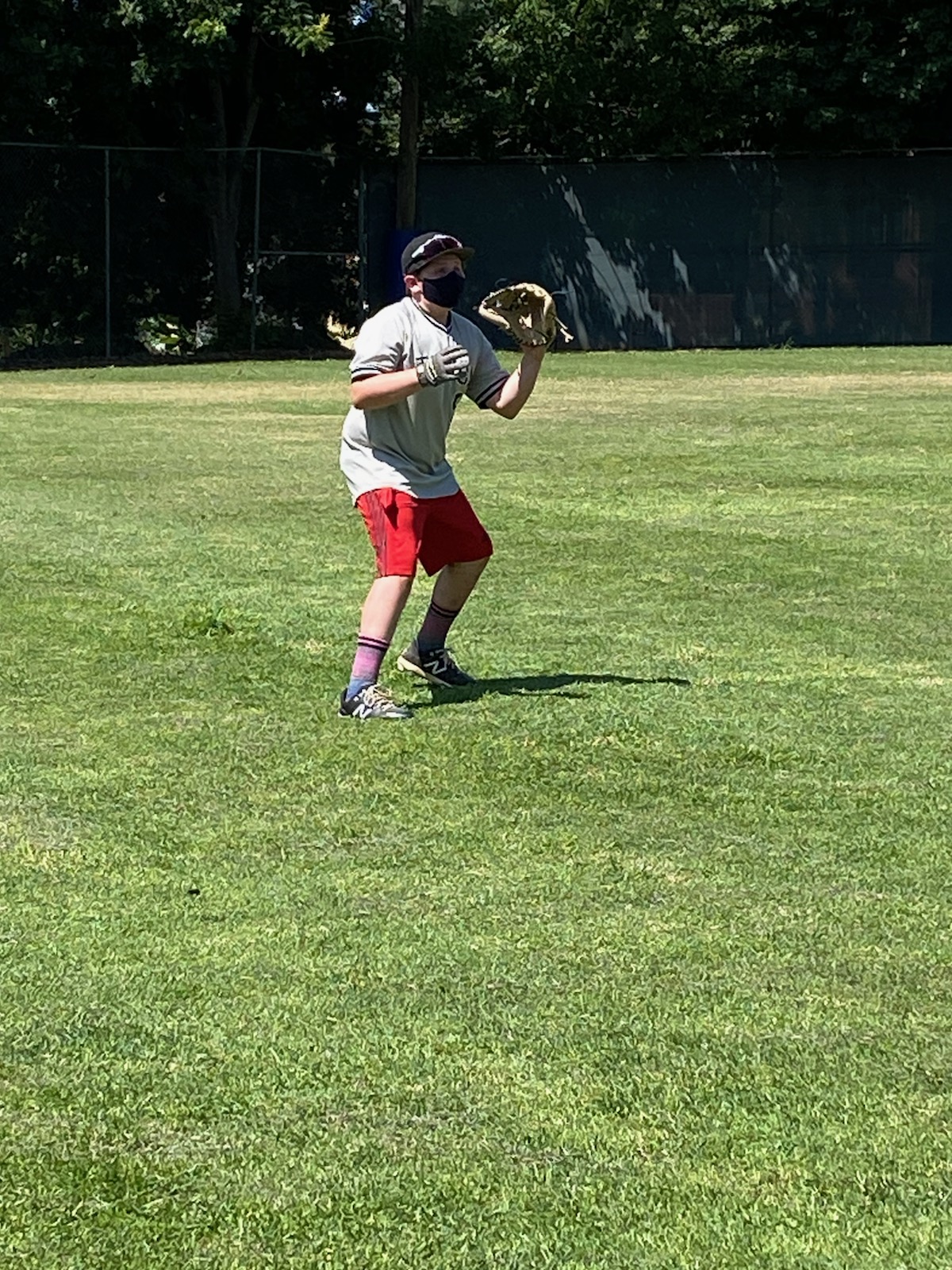 Catching the ball is a fundamental of baseball. (Photo courtesy Mike Graceffo)

“I like baseball and I’ve been stuck inside,” he said. “It’s fun to get out and play baseball.”

Graceffo, who has coached in Burbank for more than four decades and has worked for the Burbank Parks and Rec Department for 41 years before retiring, is glad Breakthrough Sports offers these camps.

“These kids need to be out there,” he said. “I didn’t realize how much I miss coaching and being with the kids. Our solitude is the baseball field. We’re making the best out of a tough situation.”

Some of what the campers learn during the three hours includes the importance of stretching and doing calisthenics, ladder drills, soft-toss, hitting off the tee, bunting, learning the relay and cut-off, running the bases, playing catch and playing over-the-line.

“I’m very grateful to Champ, the City of Burbank and the Burbank Sports Office for allowing me to participate as a coach,” said Graceffo, who was inducted into the Burbank Walk of Fame in 2006, and was a coach at the Michael Jordan and B.J. Armstrong Basketball Camps, of the weeklong baseball camp.

No doubt the youngsters are equally grateful to get out of the house, have fun and to learn how to play the grand old game of baseball.

For more information about the upcoming Breakthrough Sports baseball camp that runs from August 3-7, go to burbankparks.com.

An overcast sky gave way to an early morning sun as a dozen boys ages six through nine excitedly took the field for the fourth day of the first session of the Junior Bulldogs Baseball Camps at Burbank High on Thursday.

When asked if it’s fun to participate at the camp, Baker answered in the affirmative. “Of course,” said the nine-year-old who plays Little League for the Ninja Tigers and has a game on Saturday. “We did all kinds of games like over-the-line and four corners.” 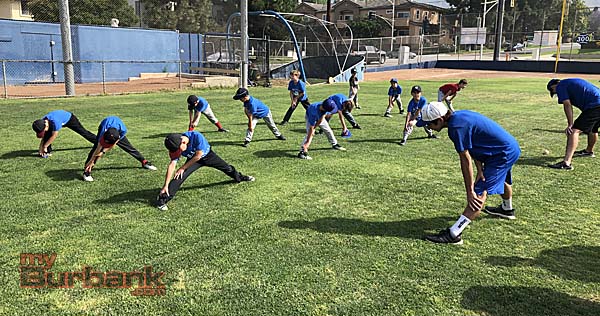 Overseeing the camp is Bob Hart, the longtime coach of the Bulldogs along with assistant coach Tony Ciccone.

“I just enjoy instilling the joy of the game to them,” Hart said. “I find that very pure. Very simple. Adults can be complicated. Kids aren’t that complicated.”

Hart said some players actually began at these camps.

“I’ve had kids in my program currently that were in these camps,” he said. “There’s a lot of immeasurable amount of satisfaction in watching a kid who struggles early in the camp and then watching him evolve by the fifth day to the point where his self esteem starts to skyrocket and he feels like he has a place. He’s a contributor. Everyone wants to contribute. These kids are no different.”

Also assisting was Mike Graceffo, a longtime coach in Burbank, who retired from his job at the Parks and Recreation Department in 2016. 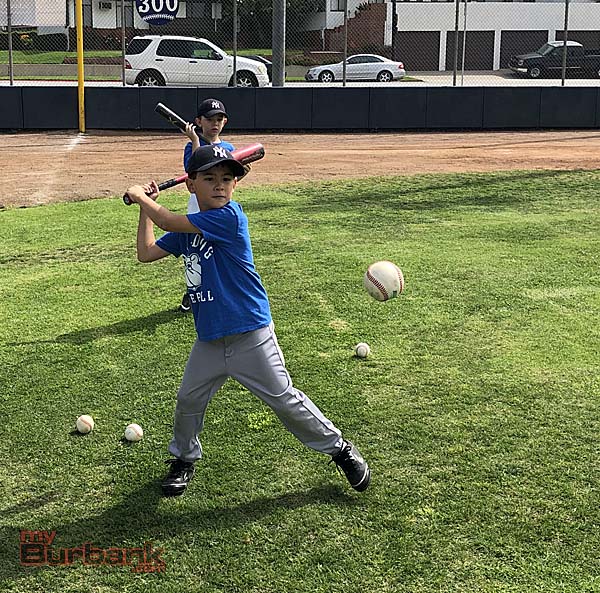 Here’s a youngster about to take his swings. (Photo Courtesy Mike Graceffo)

Spens has volunteered for these summer camps and has been assisting since he was a freshman.

“Yeah, it’s really fun,” said the junior center fielder who batted leadoff for the Bulldogs of working at the camps. “You kind of get to go back to how you grew up and see how they grow up. You get to teach them. It’s nice to give back.”

Spens then talked about how he developed a love for the game.

“I started really little,” he noted. “My grandpa started teaching me at a really young age. He’d take me to the park and I fell in love with it. It’s full circle.”

Duarte has also been involved with the camps since he was a freshman. “It gives you an opportunity to give back to the program a little,” said the junior first baseman/pitcher. “When I was a kid I went to these camps and thought it was really fun. Yeah, there’s a commonality between me and the kids. It’s still baseball.”

The three-hour camp began with the youngsters running around the baseball field just like the big-league players.

Then four lines with three boys in each line was formed as each stretched to make sure their muscles would be ready for the day’s activity which began with short toss. 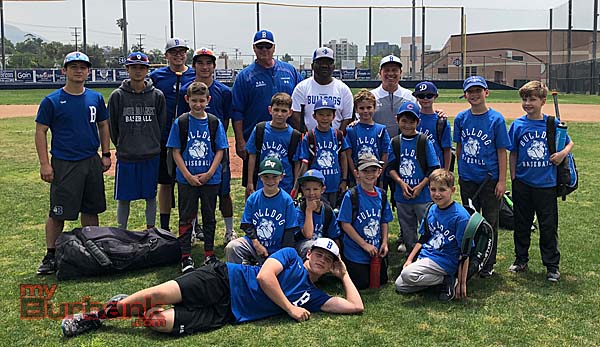 It’s all about the team and of course teamwork. (Photo Courtesy Mike Graceffo)

Next on the agenda was the formation of three teams of four as each threw the ball to the next boy.

Once that was over there were two teams of six boys in a straight line as they each threw the ball to the next boy.

The winning team was judged by how fast and accurate the tosses were.

What followed was a simulated game with a Bulldog player taking a  knee and then tossing the ball underhand as each boy took his cuts.

If the ball was hit between the cones, it was a single. If it went further down the line, it was a double, but if it was caught, it was an out. 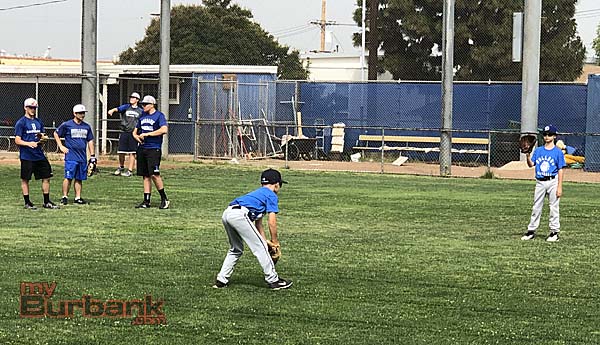 A young camper gets ready to field a grounder. (Photo Courtesy Mike Graceffo)

The day was capped with Graceffo, who has been a Burbank-area coach for 41 years, tossing the ball underhand to the boys in another simulated game, but this time running to the bases.

Graceffo then added: “One of the biggest things I find enjoyment in coaching is seeing kids develop,” he said. “Kids that I coached when they were six years old and now they’re young men doing great things in society and doing great things in their city and giving back to their community.”

There were a few breaks in between as the boys ate ice pops, drank water, talked about movies and of course baseball and baseball trivia.

For those parents interested, they can to go to www.burbankhighbaseball.org for more information.