After careful consideration of the current science regarding the pandemic, all academic classes during the fall 2020 semester at Providence High School (PHS) will continue to be conducted online as Block Online Learning Days (BOLD). Co-curricular activities such as clubs, student-led organizations, performing arts, athletics, mock trial, etc. will be held both virtually and on-campus, as allowed by public health officials and restrictions.

“This hybrid approach prioritizes the integrity and quality of our academic programs and seizes opportunities to connect through in-person, co-curricular activities,” said Head of School Scott McLarty. “It also allows us to fulfill our mission to ‘steadfastly serve all’ members of our community in ways that are safe, equitable, and just.”

Beginning next week, PHS will offer various ways to connect and partner as one Providence community in preparation for the fall semester, starting with class-level online meetings.

For more information, please visit the FAQ page on the school’s website.

Students applying for admission to Providence High School will not need to take the High School Placement Test (HSPT), or any other entrance exam, as those test results will not be a factor in admission to the school. This is not a testing-optional policy, rather it is a decision to no longer accept standardized entrance exam results, which do not reliably demonstrate a student’s diligence, creativity, character, or intelligence and are not aligned with Providence’s curriculum and values. Additionally, many prospective families spend an inordinate amount of time, attention, and money (if they can afford it) preparing their child for entrance exams, which can lead to unnecessary stress and anxiety on the child.

“Taking part in interviews, preparing essays and documents, exploring and evaluating all the options, and attending admissions events is stressful enough for an eighth-grade student and his or her family,” said Head of School Mr. Scott McLarty. “And, we do not wish to play a role in what is essentially a moneymaking enterprise for testing and test-prep companies that have no regard for systemic inequities.”

The absence of entrance exam scores will allow for opportunities to be even more creative in the ways to get to know prospective students and families. Changes to Providence’s admissions process will include:

“At Providence, we say that a student is not just a GPA, so they are definitely not a test score. This philosophy needs to extend to prospective students as well,” said McLarty.

In an effort to practice social distancing to prevent the spread of the coronavirus, beginning on Monday, March 16, Providence High School will move its educational program online and implement its new Block Online Learning Days (B.O.L.D.) through April 17.  Regular school days are slated to resume on Monday, April 20, though administrators will continue to monitor the situation closely to determine whether online learning needs to be extended beyond that date.

While using the B.O.L.D. schedule, school will still be in session, however students will remain at home and log in to each class, or block. Faculty and staff members will continue to report to campus during this time in order to teach remotely via Skype and Schoology, Providence’s Learning Management System.

“One of the things we are known for is knowing our students and I am so proud of how our faculty and staff are building an online learning environment with relationships with students as the foundation. We are truly living up to our mascot, the Pioneers,” reflected Head of School Scott McLarty.

There are no confirmed cases of students, faculty, staff, or family members of anyone in the Providence High School community with COVID-19 and there is no reason to believe that anyone is at immediate risk of exposure.

“By going B.O.L.D. and moving learning online, Providence High School is showing how we are a community that can respond effectively to the needs of our students and families in ways that also benefit the wider community,” added McLarty.

A full week after winning a prestigious student-athlete award, Caitlin Markey is still smiling from ear to ear. But then again, the Providence High School senior is always smiling. Markey is confident but humble. She is intelligent and full of promise. She is a natural leader and inspirational teammate.

“Caitlin represents our school very well,” said Athletic Director Andrew Bencze, who nominated Markey for the award. “She handles herself with class and dignity.” 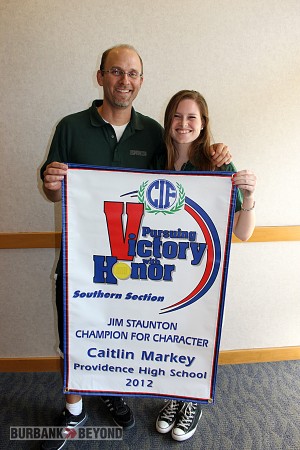 On October 1, 2012, Markey was honored by the CIF Southern Section at the 9th Annual Dr. Jim Staunton Champions for Character Ceremony at the Queen Mary in Long Beach. The award is given to student-athletes, coaches, administrators and schools who best embrace good sportsmanship and the principals of “Pursuing Victory with Honor.”

Markey was just one of 14 students to be recognized.

“I like talking to people and I love being a leader,” she said.

Not only is Markey a leader in the classroom and on the soccer field, but she is the ASB President as well.

“Balancing academics and athletics with ASB is definitely a challenge, but it is totally worth it,” she said with a smile. “You just have to manage your time properly.”

As a sophomore, Markey experienced success on the soccer field as Providence was loaded with talent and veteran players. However, her junior year was more of a challenge as the team lost nine players to graduation and victories were few and far between. She was forced to step up and lead the team through a difficult season.

“It’s easy when things are going well,” Bencze said. “But Caitlin shined last year as a junior when times were tough. She handled herself very well.”

Markey’s ability to shine in the face of adversity is one of the main reasons Bencze nominated her for the award. She is the first student from Providence to win such an award. Last year, Victor LeBreton, the school’s vice-principal, was honored with a character award and the school as a whole was honored as well.

The ceremony was attended by approximately 300 people and lasted about two-and-a-half hours. In addition to a trophy, banner and letterman patch, Markey received a $500 scholarship during the event. She is currently researching colleges and prefers to attend school locally next year at UCLA or LMU.

An honor roll student and oldest of four brothers and sisters, Markey credits her mother as her biggest inspiration.

“She is the greatest example for all of us,” Markey said. “My mom is a true champion.”

Students arrived at Providence High School Monday morning not only for their first day of school, but also to celebrate cutting the ribbon on their new science center.  New, modern, cutting-edge science classrooms will help students pursue their dreams in media, technology, and medical sciences. 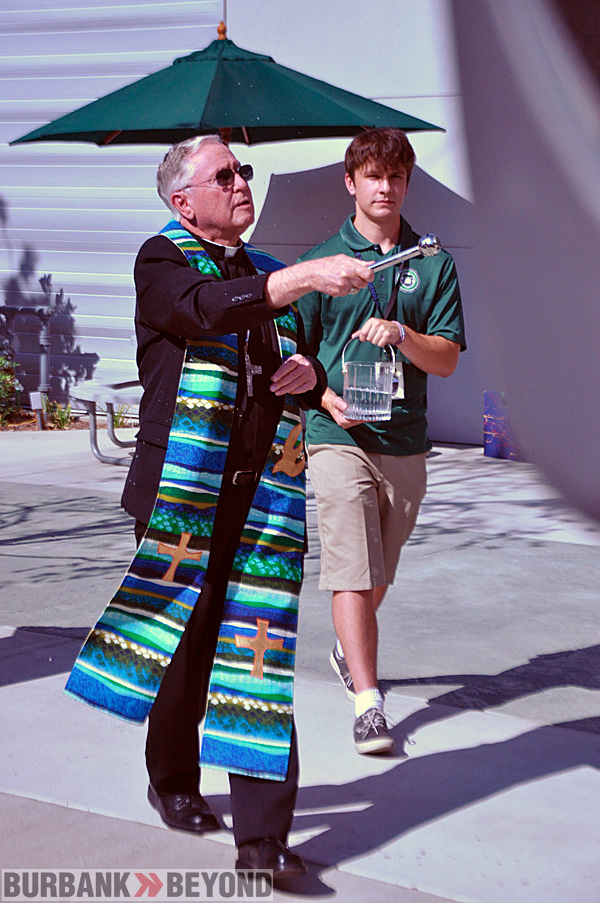 “It became apparent the 1955 science environment needed improvement” noted Sister Lucille Dean, Chair of Providence, Health and Services Board of Directors, and former Principle of the school.

The new science center, with 3 state of the art physics, chemistry, and biology labs, dazzle visitors and students.  Several students were overheard discussing how much fun it will be to “break in” the classrooms.  Guests provided their approvals, and teaching staff strained to get to work.

A recurring theme in the science center’s opening ceremony highlighted ties between Providence High School’s goal of preparing students for service in health care and other service professions, and the need for ensuring a student never loses their soul or faith in the pursuit of knowledge. 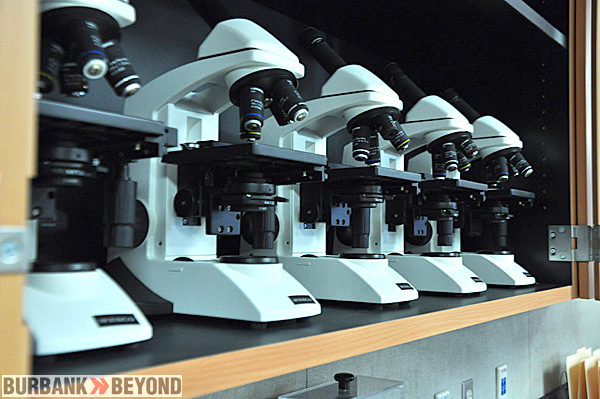 According to Paul Kaminski, Director of Advancement, Providence HS began raising money for the project in 2007, ending with a total of $3.2 million.  Completed in 3 stages, including a new quad and lunch area, the Science Center was the third and final phase.

Providence HS opened in 1955, and has been co-educational since 1974.  Enrollment continues to be strong, competitive, and students follow a course directed at college preparation, as well as participating in elective programs including Medical Focus, Media Focus, and Technology Focus.  Graduates have entered universities throughout the United States, from Syracuse University, the University of Minnesota, to UCLA. 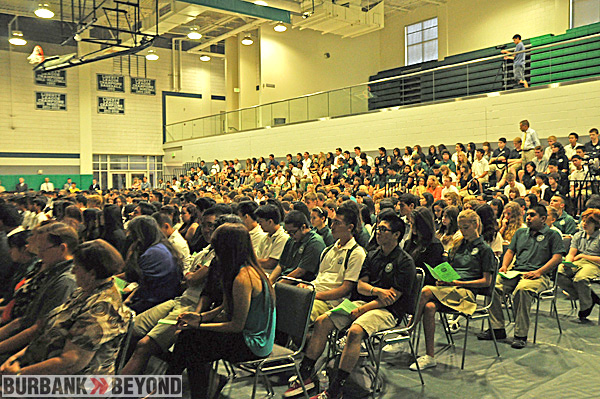