In a report to the Burbank Unified School District School Board earlier this month, Dr. Tom Kissinger, the district’s Director of Elementary Education and Categorical Programs, outlined the administration’s plan to add an anticipated 21 elementary teachers over the coming six years. The hiring of additional teachers for grades K-3 will ensure the district meets the State mandate on class size reduction ahead of the 2020 deadline.

“The objective is to improve reading and math skills for primary grades in smaller classes,” Kissinger said about the California Department of Education (CDE)’s effort to institute smaller class sizes statewide.

While Kissinger stresses that the numbers and needs are expected to change from year to year, due to enrollment shifts and other factors, the plan demonstrates BUSD’s commitment to meeting the State guidelines.

“The district is required to make progress every year, at every school site, to work towards the State goals,” commented Kissinger. He noted the administration will make annual adjustments to the plan for reducing the ratio of students per teacher for school years beginning in 2013-2014 and running through 2020-2021.

BUSD must show this effort annually as part of their application to the State to receive funds from the Class Size Reduction (CSR) fund through the CDE. The money received every year from the CSR/CDE funds covers the cost of hiring the additional teachers, according to Kissnger.

The State mandate says that class sizes for primary grades of Kindergarten through grade three must be at a 24:1 student to teacher ratio by the year 2020. According to BUSD’s plan, all elementary schools are anticipated to reach the 24:1 ratio by the 2019-20 school year.

Since the district has already hired two full year and one half year teachers for the 2013-14 school year, and the plan calls for an anticipated need of 23.5 teachers, BUSD can expect to hire 21 K-3 teachers in the coming years. The district is planning to have hired a net total of more than 15 additional teachers by the 2016-17 school year. 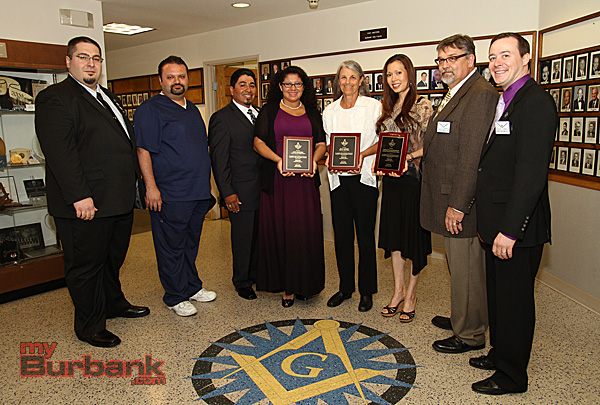 On Monday Evening, April 29th, the Masons of Burbank hosted their annual Public Schools Recognition Night at the Burbank Masonic Center (406 Irving Dr.) The event was hosted by the two presiding officers of the lodges; Billy Campbell, Master of Burbank # 406 and Karekin Karazian Master of Magnolia Park # 618. The Master of Ceremonies Duties were shared by Tommy Quiroz and Vartan Shakhgeldyan, Senior Deacons of their respective lodges.

The festivities were kicked off with a medley of songs by the Disney Elementary School Singers, Directed by Robin Kreisberg. 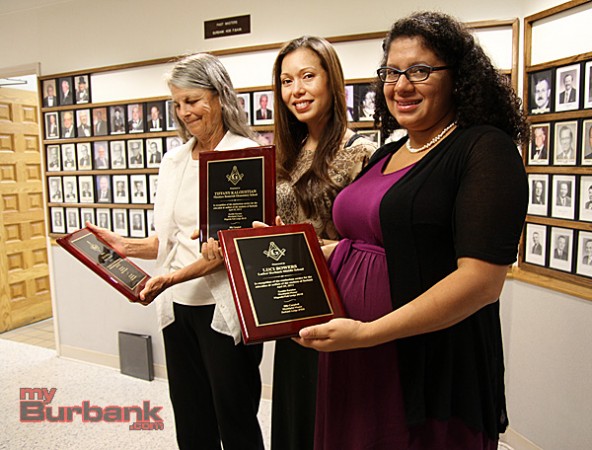 The program continued with a special recognition of three of Burbank’s finest local teachers, who were recommended by their principals and selected for their devotion to their profession and dedication to their students. Those recognized were Tiffany Kaloustian, Theodore Roosevelt Elementary School, Luci Bowers, Luther Burbank Middle School, and Jean Spero, Monteray High School.Each teacher was presented with an engraved plaque and a honorarium to commemorate the occasion. The music then continued with a performance by Luther Burbank Middle School Choir, directed by Anthony Redman. 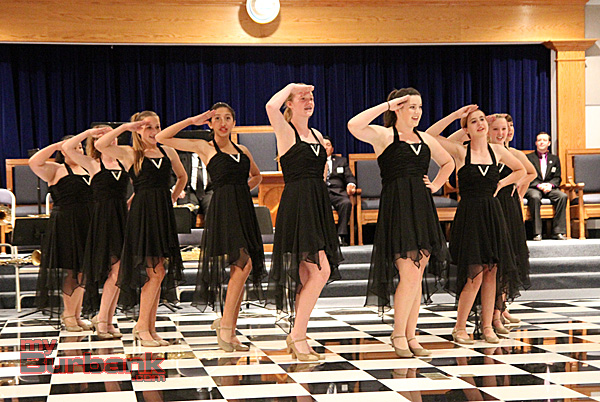 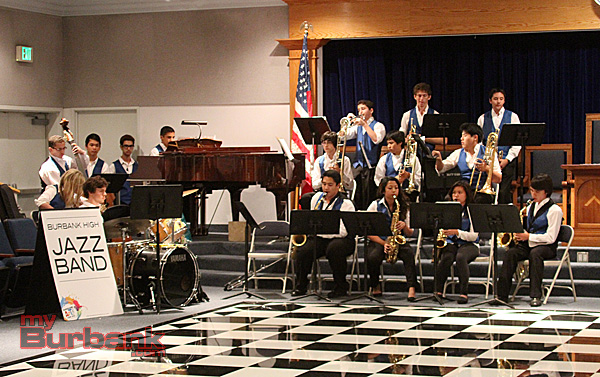 The evening concluded with music provided by Burbank High School Jazz Band , conducted by Mike Stanley. After which all in attendance were treated to a barbecue supper prepared by Lodge Members.

Profiles of the honored teachers:

Jean has taught for Monterey High School for almost 30 years. She has taught science, creating labs and experiments on a shoestring budget. She also teaches computer education, which arose from her own interest in technology and teaching students real-life applications, and she teaches mathematics patiently, working with our students who have tremendous gaps in their basic math skills. Jean also serves as the school’s test coordinator, manages student ID photos, serves as the school’s site technology technician, and assists with a wide variety of student and teacher assignments and activities that require computer formatting. Jean Spero is a great asset to Monterey!

Tiffany Kaloustian is an excellent 5th grade Language Arts teacher with tests scores among the highest in the District, but she was nominated because of the extra time she dedicates to her students. Each year, Tiffany puts on a “hula show” with the theme that one person can make a difference. She gives up her lunch breaks to teach hula dances and skits to her students, culminating in a performance for parents. She lives this theme and has challenged her students to make a difference every day. Two of her students were inspired to raise money for the Make a Wish Foundation by selling lollipops. The entire school joined in and exceeded their goal by raising $5,000 to make wishes come true for two children who are terminally ill. Tiffany has instilled the qualities of compassion and activism in more than 100 fifth-graders at Roosevelt Elementary School.

Luci was unanimously nominated by her peers. As ASB Director, Luci is the consummate professional! She and her students are the heart and soul of Luther Burbank Middle School. Luci has revived school spirit and doubled the involvement of staff, students, and families in school activities. Luci has recruited the time and resources of multiple business partners. She always thinks outside the box and refuses to believe that something cannot be done. Luci’s teaching shows caring, compassion, and high expectations. She is a team with her students and she doesn’t succeed until they do. She has a loyal following of past students who continue to seek her advice and guidance. Luci is truly a team player. The Luther Burbank colors of green and gold flow through her veins!

Straight-A student Rami Makarem, 11, had three words to say as his fork was poised over two pancakes on the paper plate Friday morning before class. 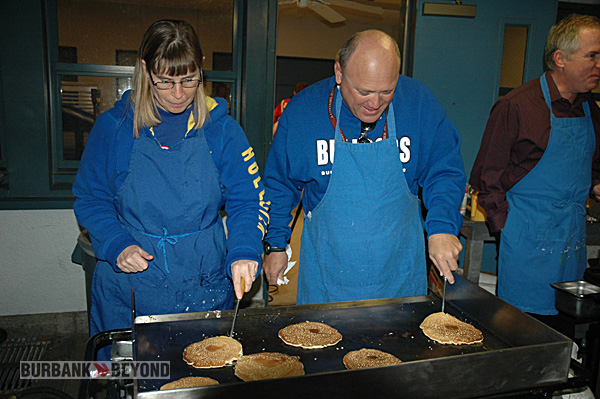 The event was the annual “A’s Breakfast” and every student who earned an A on their report card was treated to a pancake breakfast beginning at 6:45 a.m., said Principal Stacy Cashman.

Administrators, teachers, secretaries, instructional assistants and custodians all did their part to make the students feel special. 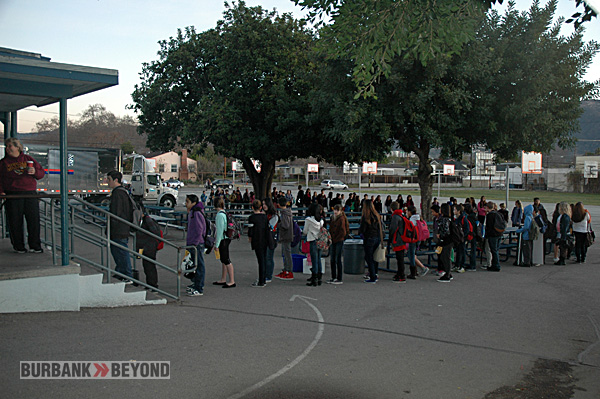 Jordan Middle School students, who earned A’s on their report cards, wait in line for their pancakes.(Photo By Joyce Rudolph)

The estimate of pancakes served was 1,500, said culinary arts teacher Doreen Wydra, who stepped in to run the event for teacher Terri Kim who is on maternity leave.

Nathalie Celio, 12, a seventh-grader, earned four A’s on her report card in English, science, physical education and art, she said.

“The kids who got an A deserve the pancakes,” she said. 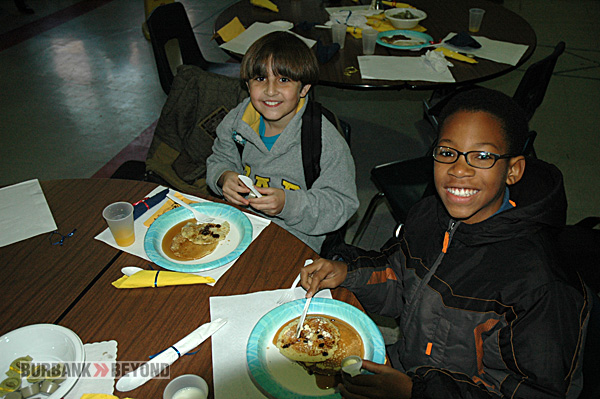 “It’s cool!” said Collin Johnson, 11. He received A’s in physical education and in his computer class. “You never see this at other schools.”

The students display a lot of pride during the breakfast, said custodian Gary Rapp, who attended Jordan in the 1970s.

“The kids absolutely love this breakfast and we love doing it for them!” he said. “They come in with their shoulders back. This is just a fantastic event.”

The A’s Breakfast tradition started about 30 years ago and was the brainchild of former guidance counselor Marv Cira, said Karla Buffington, physical science teacher. Funds for the breakfast are raised during the PITS (Parents Interested Teachers and Students) Talent Show, Cashman said.

Jordan Middle School students, who earned A’s on their report cards, wait in line for their pancakes.(Photo By Joyce Rudolph)

On Thursday evening April 28, the Masons of Burbank hosted a Public Schools Recognition Night at the Burbank Masonic Center (406 Irving Dr.). The event was hosted by the two presiding officers of the Lodges; Al Moen, Master of Burbank #406 and Michael Strand, Master of Magnolia Park #618. The Master of Ceremonies duties were shared by Erik Adams and Mike Campbell, Senior Deacons of their respective Lodges.

The festivities were kicked off with a musical presentation by solo vocalist, Talin Silva of Providencia Elementary School. The music then continued with a performance by “Clef Hangers”, an all Boy Choir from David Starr Jordan Middle School, conducted by Christine DeMore , with accompanist, Judie Stroh.

The program continued with a special recognition of three of Burbank’s Finest (local teachers that is), who were recommended by their Principals and selected for their devotion to their profession and dedication to their students. Those recognized were: Kay Cee Mills, Burbank High School; Ted DeVirgilis, John Muir Middle School; and Tyson Colt , Edison Elementary School.

Each teacher was presented with a framed Certificate of Appreciation, an engraved commemorative the occasion and a small Honorarium. Each of the musical presenters were given a small Honorarium to go toward their respective school’s program.

The evening concluded with music provided by the Burbank High School Jazz Band, conducted by Mike Stanley. After which all in attendance were treated to a Bar B-Q supper prepared by the Lodge members.