On Saturday, December 15, Mayor Emily Gabel-Luddy honored Grandmaster Vincent J. Rodricks with a certificate of appreciation during a Christmas celebration at Andre’s Martial Arts, located inside the Burbank Town Center. 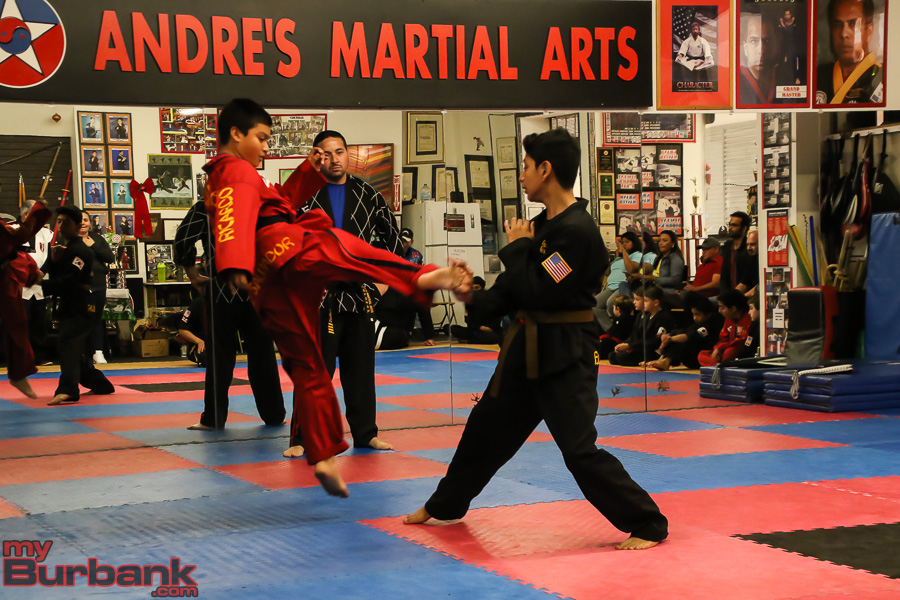 During the Taekwondo studio’s annual Christmas party and belt ceremony, Mayor Gabel-Luddy presented the certificate, praising the masters’ for the positive impact they’ve had on the community. Following demonstrations, students and their parents watched as Grandmaster Rodricks was honored.

“You are all a real-life example of what happens when you maintain discipline, focus, humility, and practice. I want to congratulate all of you in your next steps,” said Mayor Gabel-Luddy.

“The people who have the greatest humility are the most powerful. It doesn’t make sense but when you think about it it makes all the sense in the world. Thank you for your dedication to our community.”

Burbank Police Department Captain Denis J. Cremins was also in attendance and has returned for several years in a row. 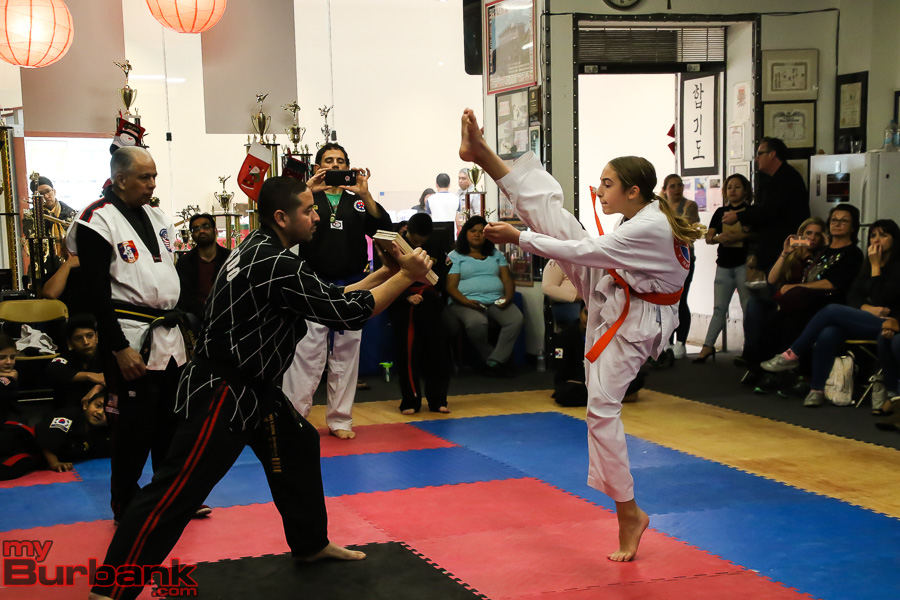 Taylor Martinez (10) earned an orange belt with a green stripe. (Photo by Ross A Benson)

“I’ve known Grandmaster Rodrick for 7 years. I’ve seen the way he’s interacted with the kids and the families. He has a great deal of respect, and it builds a lot of character in the kids. The character building is the most important thing. He’s changed their lives in so many different ways,” said Captain Cremins.

After receiving the certificate, Grandmaster Rodricks presented a plaque, a representation of his appreciation to the Mayor, thanking her for the City’s support.

Earlier in the day’s session, students as young as 3-years-old broke wooden boards in half with a single kick, earning higher ranked belts for their hard work. Masters also demonstrated their skills by breaking cinderblocks in half.

Andre’s Martial Arts have a reputation of inclusivity, encouraging families with autistic children to become involved. One of the parents who helped organize the Christmas party’s potluck, Lori Nishida, has a teenage son with autism who has thrived under Grandmaster Rodricks’ instruction.

“Whenever kids come in, whether a child is little or has special needs, Vince would assign a kid to mentor that child, to show them the proper techniques for kicks,” said Nishida. “It’s been great, because then kids learn from a young age how to help each other, no matter what their abilities are.” 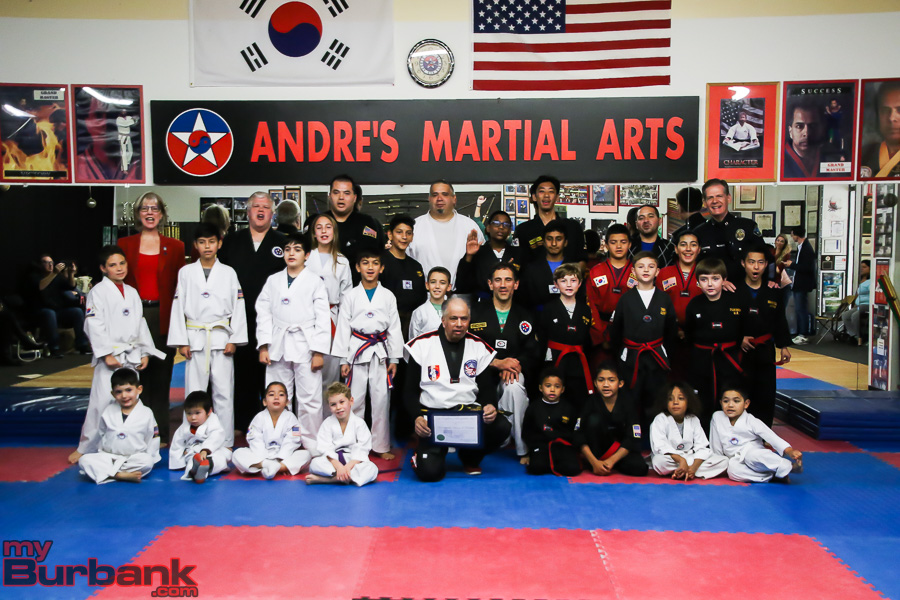 As the masters volunteer their time and do not get paid, parents thought it would be a good opportunity to come together and buy a seasonal gift to show their appreciation. Each master was given a gift card to Starbucks.

Andre’s Martial Arts is located on the first floor of the Burbank Town Center at 201 E. Magnolia Blvd., Ste. 140.

As the members of the Burbank High School baseball team gathered around Gary Seymour in the outfield before the start of practice the other day, he pointed to part of the group and said, “These 10 will be dead before their 18th birthday!”

Seymour is bringing home to the teens the grim reality that traffic accidents are the single leading cause of death for teens.  It’s a statistic that the veteran Burbank Police Department is all too familiar with — his 17 year-old daughter, Tricia, was killed in an accident in 2004.  He’s been giving talks since then in hopes of keeping teens alive and saving another parent from going through what he went through — and is still going through.

“I think about it (the accident) everyday,” said Seymour, as he showed the team members the heart pendant engraved with “Tricia” and silver bracelet that belonged to his daughter.  He always wears them, never taking them off.

Patricia “Tricia” Jean Seymour, was in her junior year at Quartz Hill High School.  She was a passenger in a car driven by one of her girlfriends.

As the team members knelt on the outfield grass, Det. Seymour told them, “If you aren’t paying attention, you aren’t hitting the ball.  It’s the same with driving.  You need to pay attention.”

Baseball analogies come easily to Seymour.  He was a professional baseball player before becoming a police officer.  Det. Seymour played baseball at Sierra High School in Whittier, in college, and then in the Montreal Expos’ farm system.  He joined the Burbank Police Department 30 years ago.  Currently assigned to the detective bureau, he spent 14 years in the traffic bureau.

“You wouldn’t text at the plate, so don’t text while driving,” said Seymour, adding, “Any of you could strike out Albert Pujols of the St. Louis Cardinals, if he was texting while at bat.”

Addressing the seriousness of the responsibility that comes with driving, Seymour asked the teens to think how they might feel if their driving was responsible for killing their best friend, or their little brother.  “I want you to have fun,” said Seymour, “But don’t be goofing around while driving.”

To give the students some idea of what it is like to lose someone close to you in a traffic accident, he suggested they try not talking to one of their friends or siblings for a week.  It shows the finality of death.

“It doesn’t just affect you, it affects generations,” said Seymour, “I’m not going to have grandkids now.”

Teens may think their parents are being over-protective or too strict about driving, but it is the most dangerous activity a teenager can engage in.  Motor vehicle deaths account for 35 percent of teen deaths.

His words seemed to make an impression on the boys on the team.  Ryan Veres, 16, who plays catcher on the varsity, thought Seymour’s baseball analogies were great.  “You’ve got to pay attention when driving,” said Veres, who does use a hands-free blue tooth for his cell phone when driving.

Shayne Jensen, 16, a utility pitcher on the team, also liked how Seymour mixed baseball with driving.  “It was a good message,” said Jensen, “Heartfelt and very sad.”   He drives a classic 1971 Chevrolet El Camino and a 2005 Dodge Ram, and like other players appreciated the message Seymour brought.

Head Baseball Coach Bob Hart thought it was important for his players to hear what Det. Seymour had to say.  “Hearing a true life story and how it affects people is more tangible than if the just see it on the Channel 5 News,” said Hart.

Seymour urges parents to talk to their teenagers about safe driving, and teach them to be responsible and accountable.  As he puts it, “If you don’t think that you can relay the message to them, invite me to dinner, I’ll even cook.  It’s that important.”

Editors Note: Burbank Police Detective Gary Seymour recently wrote a letter to be shared during National Teen Driver Safety Week.  Please follow the link below to read the letter and share it with any young drivers that you may know.  They may tell you “OK, Ya” when they read it, but they will read it and it will hopefully make a difference someday