Pacific Ballet Dance Theatre turned out an exuberant performance featuring highlights from “The Nutcracker” Sunday night at the Alex Theatre in Glendale.

The audience felt the chill in the air as dancers glided around the stage during the first act titled “Les Patineurs” (The Skaters) with music by Giacomo Meyerbeer. 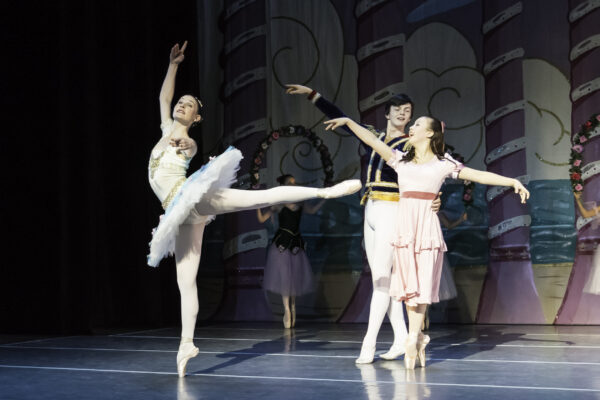 Kristine Gregorian and Michael A. Hamilton played the Lovers in the piece and frolicked on ice jubilantly with smooth turns and lifts. Quinn C. Jaxon displayed great zest as the show-off — the Blue Boy — exhibiting speed and exhaustive spins, and once, leaping into the splits, before disappearing behind the stage curtain. A well-timed faux fall shocked him back to humility.

All the best parts of the Nutcracker made up the second act. Alexandria Wong was up to the challenge as Clara — finally performing the part at age 16 that she had wished to dance since she was 4. Her wondrous expressions as she received the Nutcracker doll for Christmas from Dr. Drosselmyer to her enchantment at visiting the Land of the Sweets added to her fine execution of turns and lifts.

Jackson Bradshaw as the Nutcracker Prince was equally capable whether dancing solo or guiding Clara on their magical journey. Their reactions to each other and the other characters were sincere and sweet. 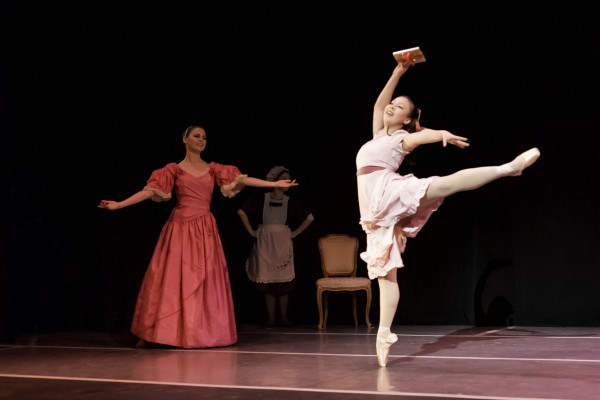 Clara (Alexandria Wong) dances for joy at her present as her mother (Elissa Brock) looks on. (Photo Courtesy of Tom Pease)

The Spanish dancers Albertossy Espinoza and Elen Harutunyan were precise in their movements while the Arabian duo, Irena Gharibyan and Clay Velasquez, amazed the audience with their fortitude in acrobatic prowess. Kristine Gregorian seemed to float like a feather as the Dew Drop.

Artistic director Natasha Middleton demands the best from her dancers and inspires them to give outstanding performances. The sets, music, whimsical costumes and grace of all on stage come together to make an exciting and memorable experience.

Entertainment and interactive activities filled the courtyard from noon to 5 p.m., so youngsters and parents alike were ready for the dance performance in the evening. It was an appropriate finale to the Thanksgiving holiday weekend.

Middleton’s determination to change up her Nutcracker production — this time adding the afternoon festival — is a perfect way to keep a longtime tradition fresh.

Pacific Ballet Dance Theatre is kicking off the holiday season with a daylong festival featuring interactive dance classes for children, live instrumental music and choral singing and culminating with a professional ballet performance on Dec. 1 at the Alex Theatre in Glendale. 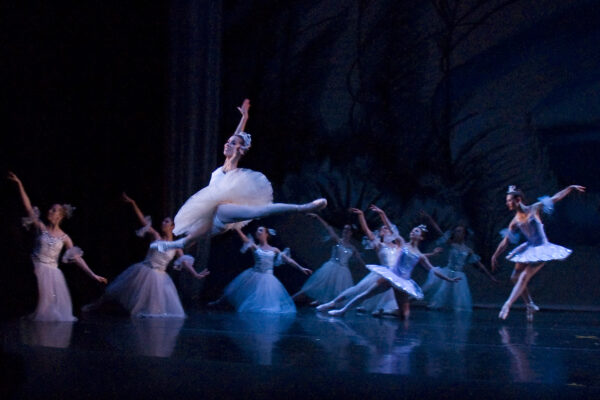 “What we want to do is get everybody excited about the holidays,” said Artistic Director Natasha Middleton.

Characters from “The Nutcracker” ballet will lead short dance classes for children starting at 1, 2 and 3 p.m. on the Alex stage. 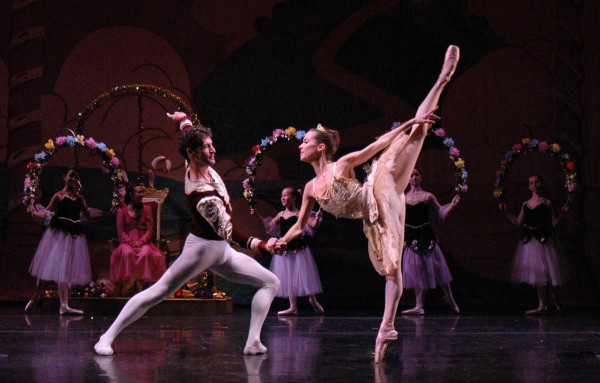 The professional ballet performance begins at 7 p.m. with a segment called “Les Patineurs” or “The Skaters” danced to music composed by Giacomo Meyerbeer and arranged by Constant Lambert with original choreography by Frederick Ashton.

The story is set on an ice pond and couples are skating around and a young boy races across the ice showing off. One couple, played by Michael A. Hamilton and Kristen, will dance a pas de deux, Middleton said.

“It’s a really hard piece for the dancers – probably one of the hardest we have ever done because the girls are on toe and there a lot of fast skating turns and they have to glide around on the ice — so it’s challenging for them.”

Dancing the role of Clara is Alexandria “Lexi” Wong, 16, who started with the ballet company when she was 4, Middleton said.

“She’s really excited because she is finally able to do a role she’s wanted to do all her life. She is really becoming quite an amazing dancer.”

Lexi started out playing a toy doll in the company’s early “Nutcracker” performances and came up through the ranks.

Jackson Bradshaw, 17, will dance the role of the Nutcracker Prince.

“They have become quite a team,” Middleton says of Lexi and Bradshaw. “They work day and night rehearsing. They are doing a lot more partner dances in this show because they are both so capable.” 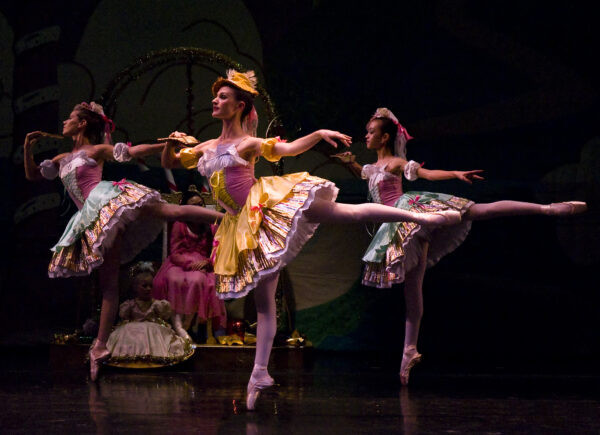 The festival is sponsored in part by the Glendale Downtown Merchants Assn. Other organizations  collaborating on the festival with the ballet company are the Arthritis Foundation, Glendale Healthy Kids, YWCA and Autism Speaks.

The company’s name was changed to honor Middleton’s father who founded the former Pacific Ballet Theatre in Los Angeles. Middleton added the word Dance to the name of her company, she said, because her dancers perform classical Russian ballet repertoire as well as contemporary styles. Middleton has produced contemporary programs for three consecutive years at the John Anson Ford Theatre. Middleton is also the school director of the Media City Dance Studio in Downtown Burbank.

Tickets are $25 to $65. VIP packages start at $90 and include premium seating and a pre-performance reception. Tickets are available by calling (818) 243-2539 or by visiting alextheatre.com.

Attention future toy soldiers, gingersnaps, and dancing candy canes! The Red Chair Children’s Production Company in Burbank is holding open auditions for young performers ages 5 to 18 for its 7 th annual production of The Nutcracker. Boys and girls active in the performing arts are encouraged to audition for this lavishly staged holiday classic ballet. Auditions will take place Sunday, September 23 at the Red Chair School of Performing Arts, 4111 Magnolia Blvd., Burbank. 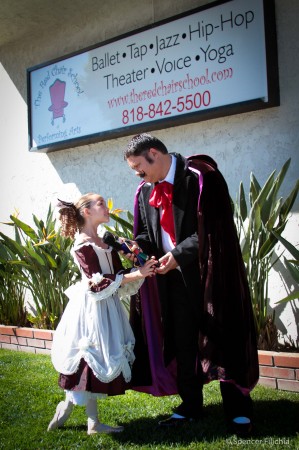 Available roles range from the colorful ensemble of Victorian-era party guests, toy soldiers, mice, snowflakes, Land of the Sweets treats, to principal roles such as Clara, her brother Fritz, the Mouse King, and The Nutcracker. Red Chair’s The Nutcracker is one of the few Los Angeles-area ballets featuring youth in prominent roles along with adult performers in a high quality, pre-professional production.

The Nutcracker will be presented Sunday, December 9th at the historic Alex Theatre, 216 N. Brand Blvd. in Glendale. This timeless holiday ballet takes the audience on a magical journey on an enchanted Christmas Eve with a girl named Clara, whose toy nutcracker comes to life and whisks her away to the Land of the Sweets.

Non-dancer and gymnast auditions start at 2:45 pm. Please arrive 30 minutes prior to the audition to register.

Those auditioning should wear dance attire or exercise apparel. Please bring socks if the child does not have ballet shoes. Students who currently dance en pointe should bring their pointe shoes. Please have hair pulled back in a bun or ponytail.  Performers must be prepared to make a commitment to attend all rehearsals and performances once they are cast in the production. Rehearsals begin take place on weekends for 10 weeks in Burbank prior to the show. Parents of children cast in roles must attend a mandatory parents’ meeting, date TBA.

Fees are $155, which includes the company membership fee, the costume fee and performance DVD. The costume itself remains the property of the production company or its costume vendors. Parents will be responsible for their children’s shoes, leotards, tights and hair products.

Los Angeles Ballet stepped into its sixth season with a delightful holiday performance of The Nutcracker at The Alex Theatre in Glendale last weekend. LAB alternately charmed and thrilled its audience with dancing that conveyed emotional depth, and bravura displays that combined strength and grace.

Act I, Scene One (hallway) features wonderfully expressive acting by Clara (Mia Katz) and her annoying brother Fritz (Aidan Merchel-Zoric). The charm continues into Scene Two (The Party) with engaging choreography and a stunning performance by the Cossack Doll (Chehon Wespi-Tschopp): ten consecutive turns (tour a la seconde) followed by a quadruple pirouette. And Scene Three is both playful and serious in its dispatch of the Mouse King. Act II, Scene One is a feast of superb performances that range from exquisite to vigorous. And the final scene when Clara awakens marks Mia Katz as a gifted actress as well as dancer.

Like The Wizard of Oz would do in the 20th century, Tchaikovsky’s 19th century masterpiece celebrates the amazing worlds a young woman unleashes in her dreams. In The Wizard of Oz, the heroine Dorothy creates a world that enables her to work through relationship issues with the adults around her. In The Nutcracker, our heroine Clara is a bit more ambitious. She dreams of a romantic ideal.

The scene opens just before the guests arrive at the Christmas Eve party at the Stalbaum Family’s festive home. Clara is being tormented by her brother Fritz, who attempts to wrestle her baby doll away from her. Later on, when the party is underway, we see Fritz and other boys waving toy guns and running through the crowd as Clara and the girls hug their dolls all the more tightly. And so we see, through a child’s eyes, society’s central problem: how to harness the male energy so that it protects fragile life rather than destroys it.

Clara’s dear Uncle Drosselmeyer presents Clara with a life-sized Nutcracker, an example of male energy properly harnessed: the Nutcracker is able to crack the shell without destroying the nut. And was it just a coincidence that Fritz got knocked over in his presence when he persisted in teasing Clara?

That night, Clara’s dream is that of an innocent young girl, not yet sailing into the storms of adolescence. So, her vision of men behaving badly is not a gang of wolves or even rats, but overgrown mice. Uncle Drossmeyer, personifying the civilizing tradition, summons The Nutcracker, symbolizing the young hero who must defend civilization anew. The Nutcracker dispatches the Mouse King; man’s better nature has triumphed over his baser one. As a result, Uncle Drossmeyer can now usher both Clara and her Nutcracker into a world where the delicate things—like snowflakes—can safely dance. A world where strength serves beauty and grace.

The Nutcracker is a young girl’s wonderful dream of civilization as it might be. And for a few hours, Los Angeles Ballet made that dream a glorious reality. If one of your New Year’s resolutions is to become more culturally involved, put LAB on your list. Then you’ll have at least one resolution you’re likely to keep long after the pounds have returned.