The Hall of Fame began in 2004 as was established through the collaboration between the Burbank Parks and Recreation Department and the Burbank Athletic Federation in honoring those who have made valuable contributions to athletics in the community.

The class was the first inducted since 2016 as the area where the ceremony took place has undergone some improvements that include the adding of the names for past and future recipients.

“It was nice this year that we had such a diverse group, in particular the Foothill Civitan Club,” said Marisa Garcia, acting director of Burbank Parks and Recreation. “They’ve been supporting our sports programs for (many) years.” 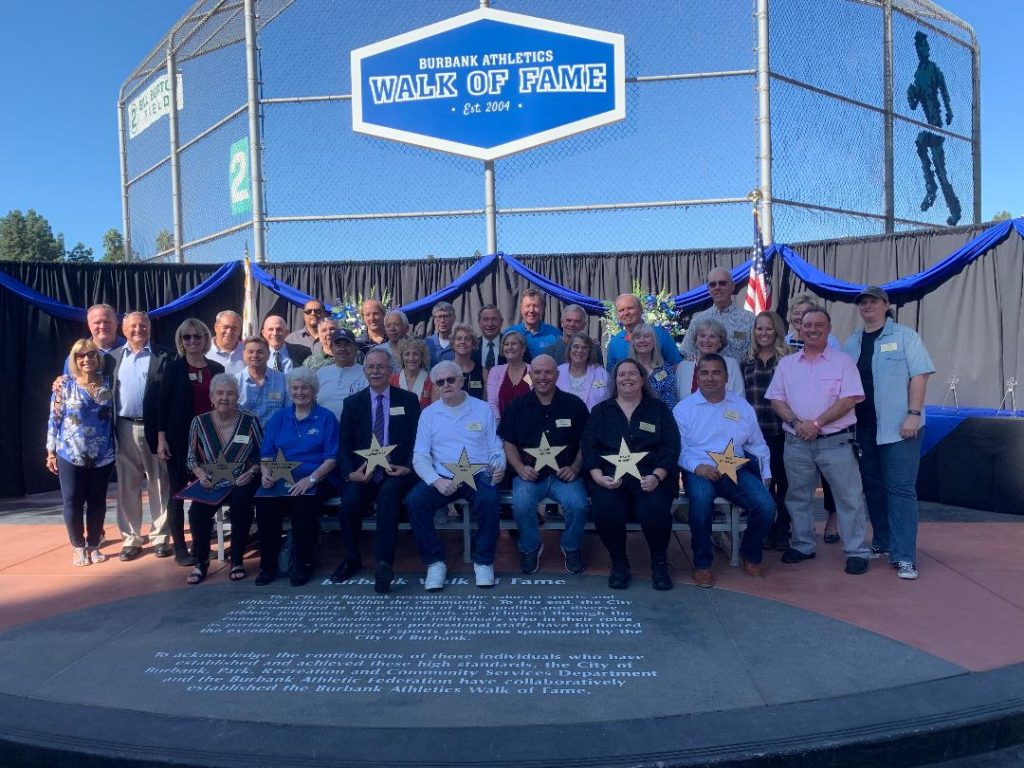 Gowanlock has been a staple in men’s slow pitch softball as his team, the ‘Cubs’ have participated in 123 consecutive seasons since 1979.

Finkle has been involved in sports in the city since the beginning. She competed in the first Ponytail softball season 1957. She later worked in Parks and Recreation for many years participating and or working in softball and volleyball. She was later a board member of the Southern California Municipal Athletic Federation.

Grimaldo has coached many local baseball and softball teams for more than two decades, even after his own children outgrew the programs.

Reily coached baseball and softball for nearly 25 years. He first began coaching after the coach of his daughter’s softball team needed to resign. He has since coached his granddaughter’s team the past five years. His son, Mike, is a longtime Burroughs High teacher and football coach.

Norvell has coached baseball, softball, basketball and volleyball in the community for more than 20 years. She now teaches softball skills classes and camps and is a private batting instructor.

Nelson joins his wife Tiffany, a Class of 2016 inductee, whom he met while coaching a softball team in 1992.  He has continued to coach baseball and softball teams for the past 27 years.

The Burbank Foothill Civitan Club has hosted Civitan Day and Ponytail Jamboree in Burbank since 1956. In addition, the club has sponsored 126 teams over the years. Through its efforts, more than 1,500 children have been able to participate in team sports in the community.

A lot has changed since 1979. Our country has had seven presidents, an entirely new Supreme Court and just six faces in Congress have stayed the same.

Locally, many local businesses have come and gone. The JC Penney department store that was once in North Hollywood is also gone. 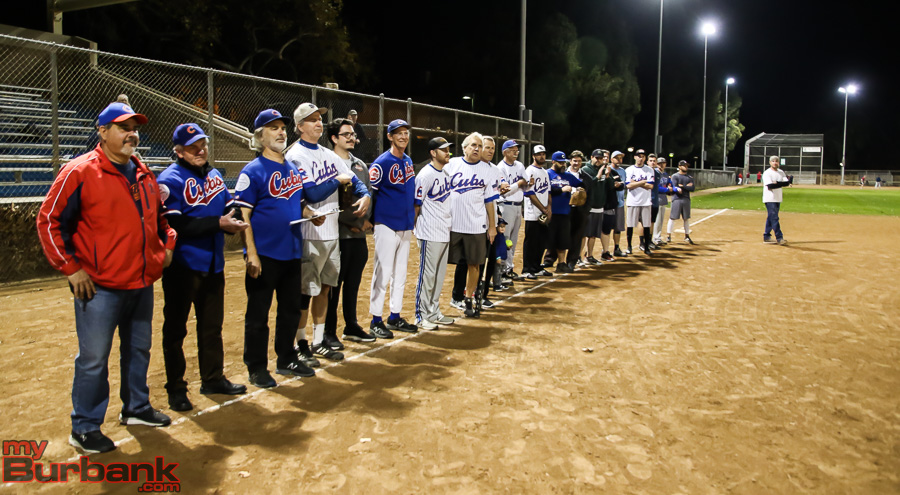 But a piece of history from that JC Penney store still remains.

In the late 1970s, a group of college students who worked together there decided to put together a team to play in an adult recreation softball league. They called themselves the “Cubs.”

It is now 2019 and the Cubs, led by player-coach Tom Gowanlock, are still going strong.

Thursday night the City of Burbank Parks and Recreation Department along with the Burbank Athletic Federation honored the Cubs for their 40 consecutive years of participation in the city’s Men’s Slow Pitch Softball League by presenting them with a plaque.

A ceremonial first pitch was also thrown at Olive Park to commemorate the event.

“We’re excited to have had a team for 40 years. It is just amazing,” Burbank Athletic Federation Vice Chairman Larry Nelson told the team and fans. 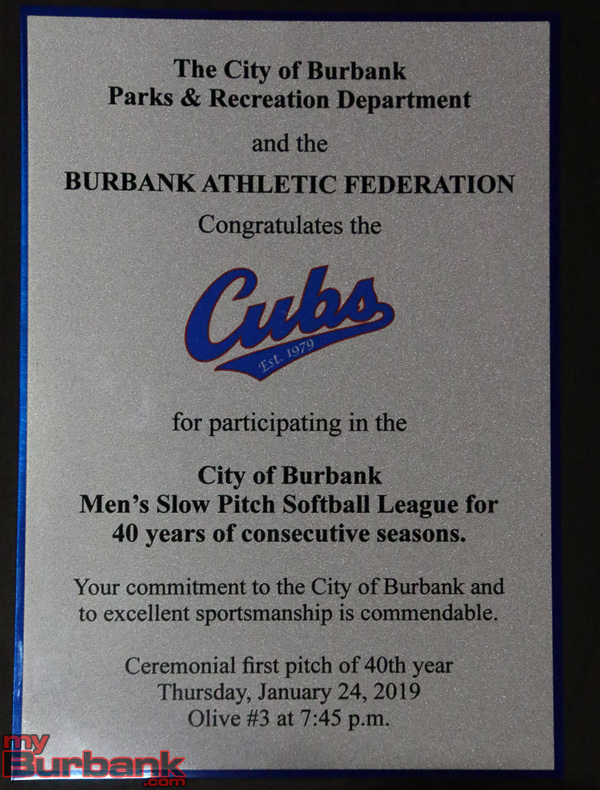 Jim Clemmensen, one of the originals, recalled how it all got started.

“We were good friends and we probably started in 1977 or 1978 in a league in North Hollywood. That’s what we got excited about,” said Clemmensen, who was once a St. Francis Xavier School student and is now a retired school administrator. “We had people from the stock room, from the floor, from suits and jewelry. When that ended we decided to come over to Burbank. We actually started with fast pitch and played at Valley and Pacific Park and found out that slow pitch was a lot more fun. The neat thing about the whole thing is that we’re friends. We didn’t replace anybody who wasn’t doing well. We didn’t recruit anybody in. In fact one of our guys once famously said ‘What do you have to do, die to get off this team.’ ”
Guy Falzone, who had recently moved to Los Angeles from Chicago, naturally played a key role in giving the team its name.

“I got a job at JC Penney and that’s where I met Tom and Jim Clemmensen. They both worked there. After a few beers a few nights here and there we decided we were going to put together a softball team,” Falzone said. “We started out playing fast pitch and then after maybe two years, we went into the slow pitch. We played summer, we played winter. I played out here for 23 years and I moved on. Tom is the longest one. We’re all good friends and have done a lot of things together. As we got older the younger kids started coming on. Now that’s what we’ve got out there — the younger guys.” 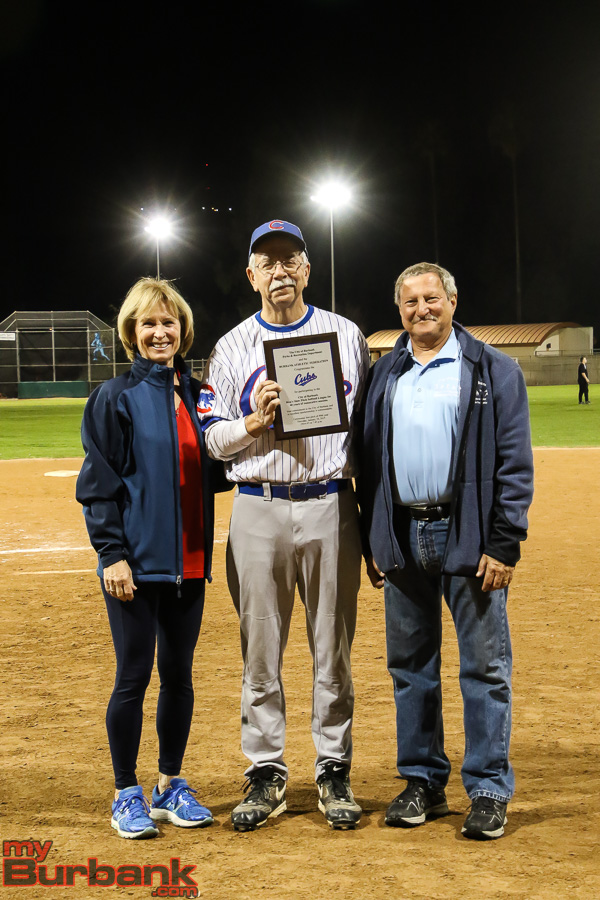 Falzone said although it is just recreational softball, the Cubs took the game seriously.

“Every Saturday we’d have practice. We did it when we first started out for about five years in a row. There would be about six of us out here hitting balls. Then I had kids and I’d bring them out. Another guy had kids and he’d bring them out. They would chase the balls around for us,” Falzone said. “We were the only team out there practicing. I never saw any other teams practicing. We would get here before everyone else or otherwise, we’d go to one of the schools and hop the fence. We would practice and have some lunch.”

Falzone said after games they would even sometimes have a beer, back when it wasn’t illegal to have liquor at a park.

“We called it the Cub house,” Falzone said.

Unlike with some sports where there is an offseason, Tom Gowanlock, a graduate of Bellarmine-Jefferson High, said the Cubs don’t miss much time away from the diamond.

“Because we make the playoffs a lot, we almost play 11 months,” he said. “We played into December and the new season started in January.”

Dan Gowanlock, Tom’s younger brother, joined the Cubs after being a baseball player at Burbank High. 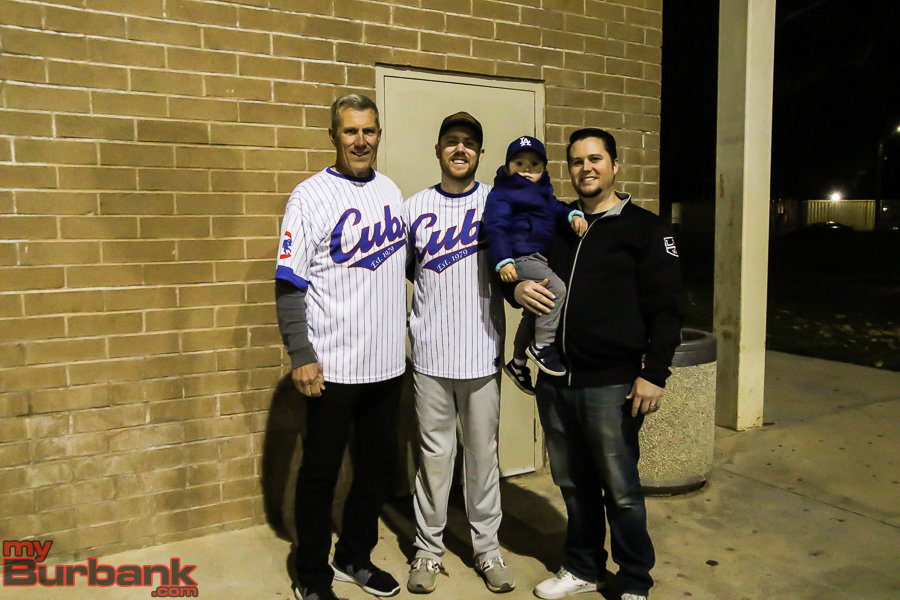 “I’ve had a tremendous time. I’ve played with my brothers. My son has played. We had a nucleus in the 80s and around the 2000s we had guys drop off because they were getting older. Then we had some youngsters come on, sons of Cubs as well,” Dan Gowanlock said. “They brought their friends in so we kind of kept the team going. It is amazing that it has hung on. There were times when we would think that people are getting hurt and getting older and families and Tom has been the glue that has kept the team together.”

There is no telling how long the Cubs will continue to be a part of adult softball in the community, but they have certainly cemented their presence in history forever.