The Burbank Police Department has received a $100,000 grant from the California Office of Traffic Safety to fund a year-long program intended to prevent road deaths and injuries by enforcing awareness and educating the public.

“This grant supports our mission to continue educating the public through various enforcement campaigns throughout the year in order to reduce the number of injuries and deaths attributed to traffic collisions and unsafe driving habits,” said Chief of Police, Scott LaChasse.

Following a decade long low in 2010, the amount of people killed in car accidents has grown to 17% across the country. In 2015, there was a record total of 3,429 fatalities from traffic related incidents. Almost a quarter of fatalities involved pedestrians and bicyclists.

According to OTS Director Rhonda Craft, unsafe behavior causes about 94% of accidents, whether it is the result of texting or the influence of drugs.

“While alcohol remains the worst offender for DUI crashes, the Burbank Police Department supports the new effort from OTS which aims to drive awareness that ‘DUI Doesn’t Just Mean Booze,’” said Sgt. Derek Green in a press release. “Prescription medications and marijuana can also be impairing by themselves, or in combination with alcohol, and can result in a DUI arrest.”

This grant comes after an elderly man was struck and killed while crossing the intersection of Glenoaks Boulevard and Lincoln Street at the beginning of the month. A Disney employee was also killed by an inattentive driver while crossing Alameda Avenue and Lincoln in September.

Funding for the program comes from OTS through the National Highway Traffic Safety Administration.

Elementary school parents are crazy — at least some of them are when it comes to dropping off and picking up their children from school.

Each morning when I take my granddaughter to school and pick her up in the afternoon, I am amazed at how many parents appear to turn off their brains as they enter the school zone. I’m sure this happens at elementary schools all over town, and not just at her school, Thomas Edison Elementary.

I’ve observed parents park at the red curb, stop in the middle of the street and wait, block the crosswalks and handicap ramps, and block driveways.  Apparently they forgot, or don’t care, that a red curb means no parking or STOPPING.  Red curbs are near corners to allow drivers to better see pedestrians crossing the street.  Apparently their child not having to walk far to the car is more important to them than someone else’s child getting run over because a driver didn’t see them step into the crosswalk.

In the past week I have seen one mom park in the middle of an intersection, blocking one lane of traffic on the cross street.  She got out of her car and walked across the street to wait for her child to get out of school, oblivious to the cars backed up behind her car.  Another parent parked so that everyone had to walk around their car because it was blocking the crosswalk.

Some of the worst offenders are the parents who park across the street and motion for their child to go between the parked cars and run across the street.  Others just drive by, stop in the traffic lane, and holler (or honk) for the child to run and jump in the car.  Impeding traffic like that is a moving violation.

Like a lot of parents, I discovered if you park down the street from the school and walk a block to the school, you avoid all the hassles and dangers around the front of the school.  Besides, walking is supposed to be healthy for you and your child.

At Edison (and I’m sure at other schools) we have a “Safe Delivery” program in place.  Older students supervised by adults, stand at the curb in a designated area, and assist students getting out of cars.  Parents simply pull into the coned off delivery lane, let their child out of the car at the curb, then continue on their way.  It’s fast, efficient, and safe.  The students participating in the program receive safety training from the Burbank Police Department.

Still there are parents who just don’t get it.  I saw one man try to squeeze his car between the drop-off area exit sign and the curb so he could park in the red zone. He knocked over the sign, but at least the sign scratched his car as it fell.  (There is some justice in the world.)  Another parent pulled their SUV into the driveway of one of the homes across the street from school, then got out and ran across the street, heading towards the school office.   Talk about the nerve of some people.

Complaints to the Burbank Police Department’s Traffic Bureau have resulted in Parking Enforcement Officers coming by and citing illegally parked cars.   One officer told me the other morning that she had written over 30 red curb tickets, but had observed many more that she couldn’t get to.   Perhaps getting a ticket will make them change their ways, but I doubt it.

What is really needed is for police motorcycle officers to cruise by each school in town and write some tickets.  The appearance of a police officer seems to have a positive effect on people’s driving habits.  An expensive ticket is a real incentive to not do something illegal again.  I know those officers are busy, but isn’t our children’s safety more important?

Unfortunately, it will take a child being injured or killed before some parents wake up and realize that they need to start obeying the law and watching out for the safety of every student.

On Saturday morning officers from the Burbank Police set up an information checkpoint on the Chandler Bike Path at North Keystone Street.  According to Sgt Darin Ryburn, Media Relations Officer with the Burbank Police Department, the objective of the checkpoint was to educate motorists, cyclists, and pedestrians using the bike path and driving through the intersection. 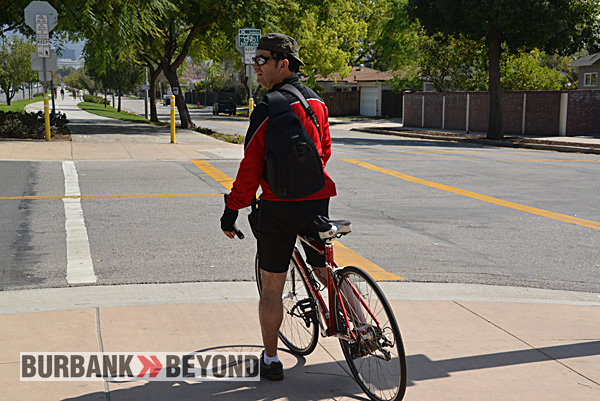 “We’re here today to educate the public” stressed Sgt Ryburn, “The Chandler Bike Path is a wonderful area for our residents, and even people from outside the community to come and walk unobstructed with vehicular traffic, except for the stop signs.”

The intersection at Keystone and Chandler is confusing to many, as it is actually an 8 way intersection.  “It is a horrible intersection, with or without the bike path” offered Kevin Stewart, a local resident.  “People really don’t know whether to go through the intersection or stop.” 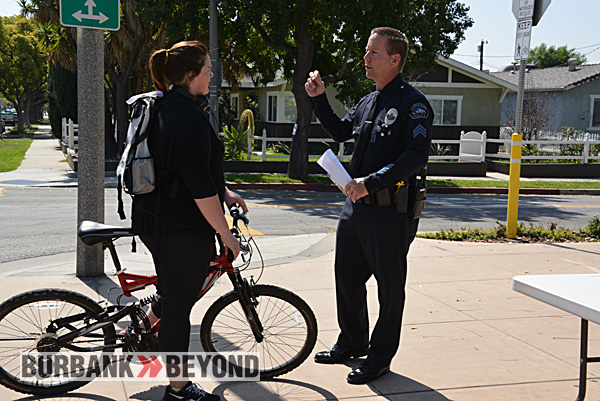 The summer months will bring out a lot more pedestrians, dog walkers, cyclists, and skateboarders.  Wither higher numbers of people using public spaces like the Chandler Bike Path and other areas of the city, the need for awareness grows, as does the need to continue developing an attitude that all need to keep our eyes open for potential hazards and problems.

As a pedestrian or cyclist, there are defensive measures we can take in enhancing our safety.   “Cars may not see you” advised Sgt Ryburn, “so you really need to make eye contact with a driver” when you are entering an intersection.  Make sure the driver sees you, and furthermore “be considerate.  Maybe you can wave that driver or pedestrian through the intersection ahead of you.” Another second or two will hurt nobody, reduce the potential of road rage, and we’ll all get where we are going safely. 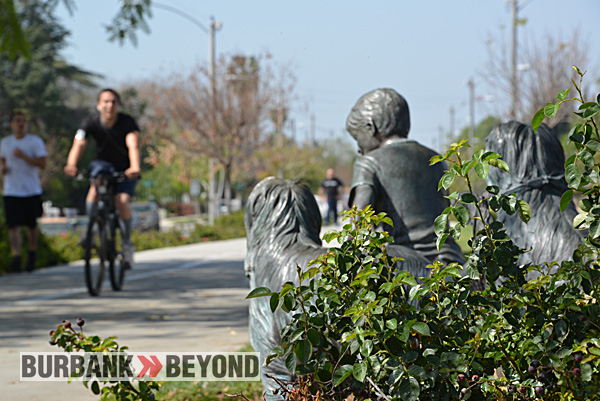 Another thing to keep in mind for all cyclists and drivers is that it is illegal to use headsets with buds in both ears.  You need to keep at least one ear free to hear emergency vehicles or other potential hazards.

As the morning conti9nued, an informal observation showed about half the cyclists entering the intersection did not stop.  Sgt Ryburn chatted with each for a few moments, ensuring everybody understood the law, and the safety reasons behind the law.

Motor officers were also present, providing an added incentive to youngsters, offering Slurpee certificates  contributed by 7/11.  They also provided motivation in the form of traffic citations to motorists who failed to comply with traffic laws at the intersection.

The Burbank Police Department is committed to educating drivers, cyclists, and pedestrians on how to stay safe, reduce the number of collisions and injuries, and make the city a safer place.