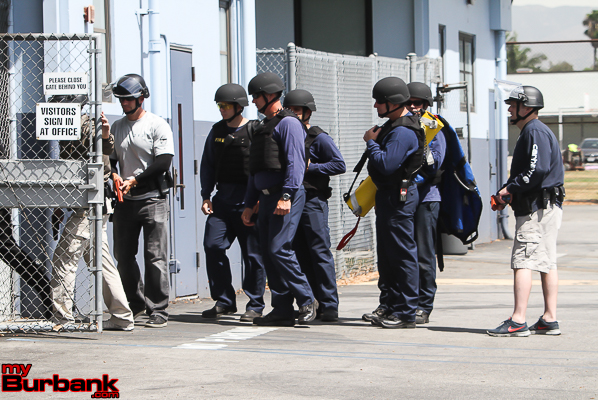 Police officers and firefighters gathered at the Burbank Adult School this week to hone their skills in a two-day training that focused on an active shooter situation as well as working with a K-9 and helicopter. 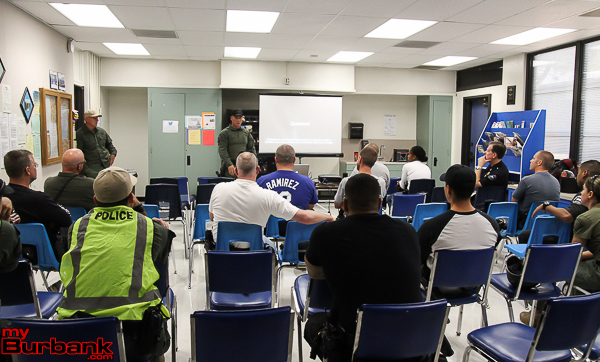 One of the classroom aspects of the training reviewed the roles of officers and firefighters when arriving at a scene where a shooter has been reported.

Burbank Police Det. Todd Burke continued through the various slides with Det. John Kaefer Wednesday morning, reminding the group that different agencies with different levels of training would be present in an active shooter such a situation 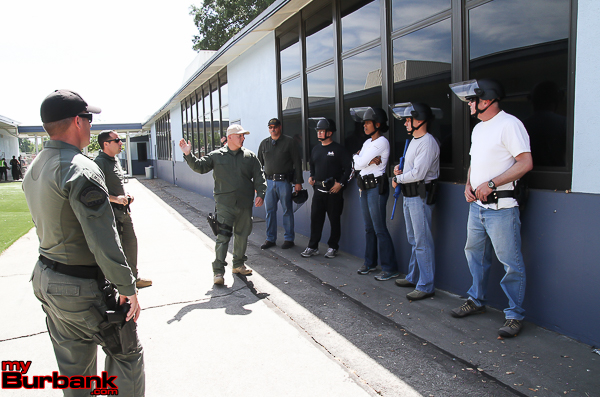 Attendees learned, or in most cases were reminded, given that many of the attendees had several years of experience, of how fluid the situation is and why addressing possible strategies before the need to employ them would not only save time, but help everyone at an often chaotic scene be that much more prepared.

The group then gathered outside the school and broke up into two smaller groups to begin searching for a possible shooter. 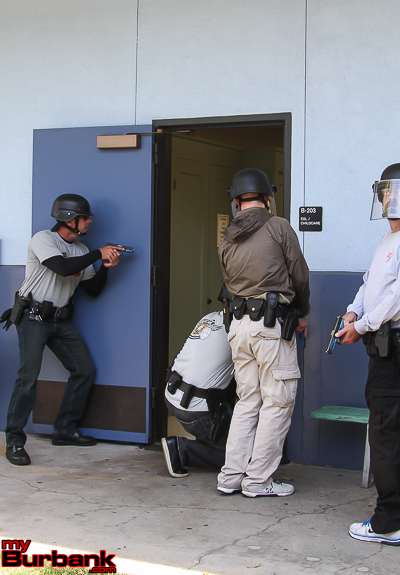 The purpose of the training, Burbank Police Officer Adam Chang said just as the first group was getting into formation, is to remind officers of what they should be looking for and how to move.

A loud, firecracker-like bang was officers’ cue that the training had commenced.

The first group methodically made their way to the first classroom, talking to each other as they approached the closed door, surrounding it, opening it, and then entering the unknown.

Supervisors and this reporter followed.

Police searched closets at the back of the room and a desk at the front of the room.

Another loud bang rang out and officers ran to the exit, peered around the door and continued to follow the direction of the “shot.” 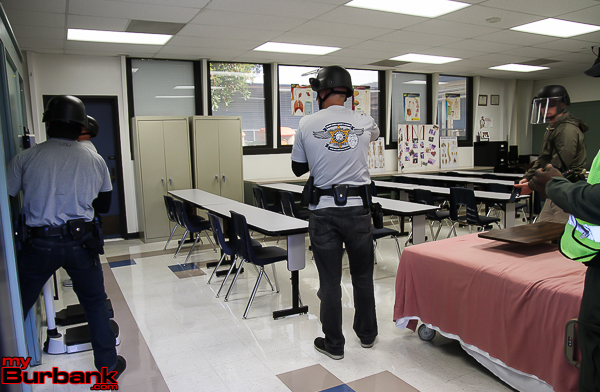 They quickly made their way back into the building, moving past children’s toys and small desks, and into another classroom. Police were soon able to surround and apprehend the shooter.

Supervisors debriefed with the group, discussing areas of improvement and aspects that went well.

As some officers and firefighters continued to train outside, including with cadets who held signs denoting they were gunshot wound victims, other officers were back in the classroom.

The group watched training videos that showed officers searching for a suspect, how a K-9 is used in different situations, and how a helicopter aids officers on the ground. 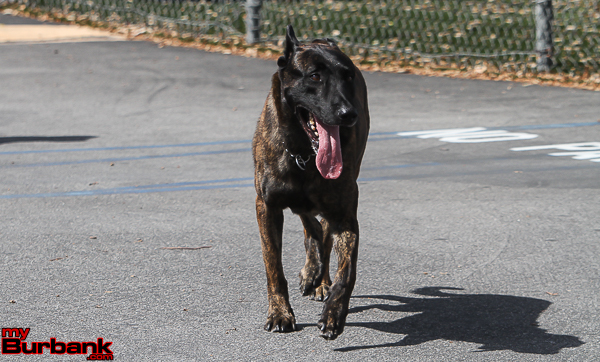 Conducting this aspect of the training was Burbank K-9 officer John Embleton, who also reminded officers to be prepared — with extra equipment and for the weather.

Embleton then led a group of officers on a search for a suspect with Steevo, one of two Burbank police dogs. 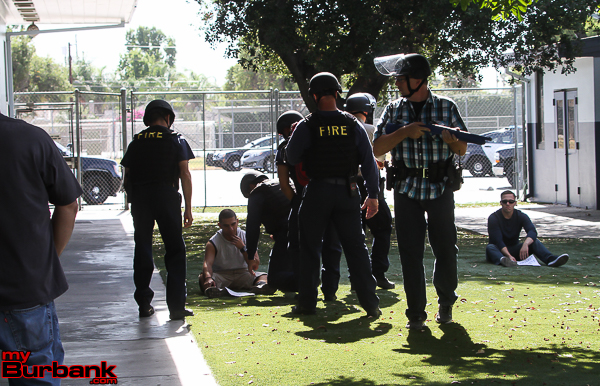 Burbank Fire Fighters treat patients while Police Officers give protection to them during BPD Active Shooter Training (Photo by © Ross A. Benson

Another group trained with a K-9 from the San Fernando Police Dept. Losacco said Glendale and San Fernando officers often train with Burbank as the agencies provide support to each other.

In this training, Alex, a K-9 from the San Fernando PD, alerted officers that the suspect had been located. But as officers were about to move toward the suspect, Alex ran back to the suspect and would not let go.

His handler had to remove the suspect from Alex’s bite, and officers learned at that moment how to deal with such a situation.  The officer who was posing as the suspect did not keep his hands up to signal to Alex that he was no longer a threat, Losacco later explained. 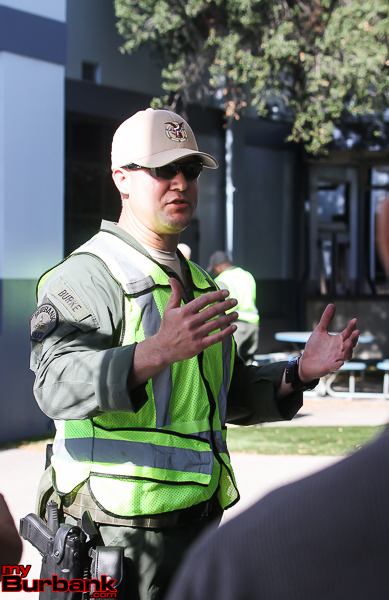 Losacco said the information presented in the training was not new.

“We’ve seen the videos before,” Losacco said of the search and K-9 deployment videos. But it’s important to rehash, he said.

“We need to talk about it and practice it, or you lose it,” he added. “It’s like muscle memory. We need to physically engage in an action.” 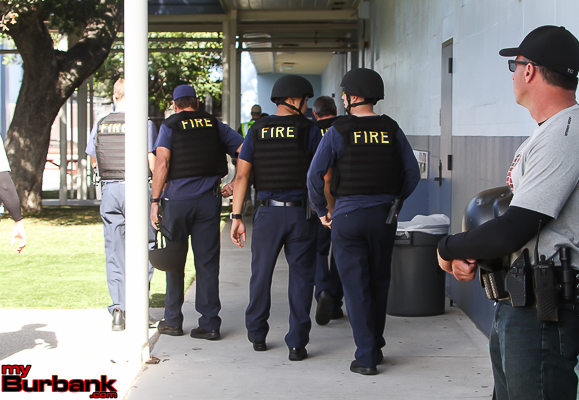 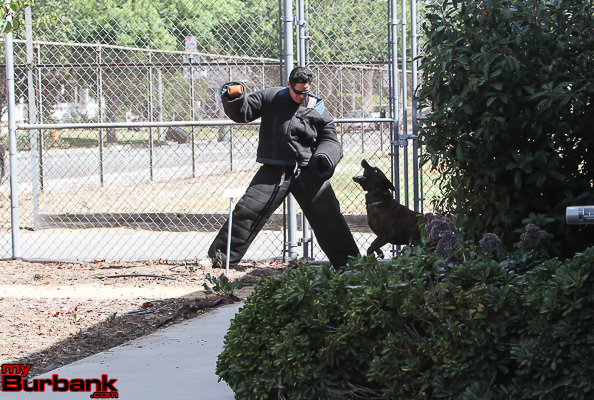 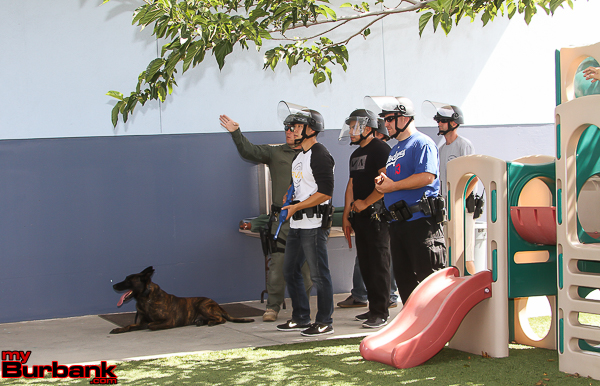 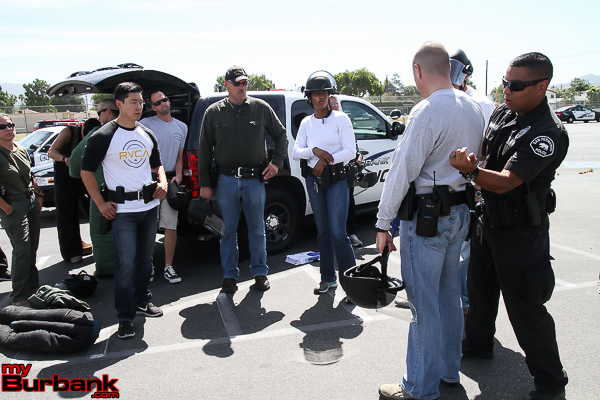 Burbank Police are assisted by San Fernando K-9 handler during Active Shooter Training this past week on the Burbank Adult School Campus.(Photo by © Ross A. Benson)

Fleet Feet Sports is offering a Complimentary 10 week “couch to 5K” training program to anyone who registers for the Burbank Community YMCA Turkey Trot, being held on Thanksgiving morning, November 22 at 8am.

The man went to work diligently piling wooden pallets, kindling, and other materials in the room, preparing to build a fire that could potentially burn down the entire building. Armed with a propane torch, he went about lighting the kindling… An arsonist attempting to destroy the structure? No, it was Captain John Nare, Arson Investigator for the Burbank Fire Department initiating a live training exercise for firefighters in property scheduled for demolition at 2223 Catalina Street in Burbank…….. See the whole story here at BurbankNBeyond along with a photo gallery burbanknbeyond.com Watch Deborah Dodge interviews here

The man went to work diligently piling wooden pallets, kindling, and other materials in the room, preparing to build a fire that could potentially burn down the entire building. Armed with a propane torch, he went about lighting the kindling…

An arsonist attempting to destroy the structure? No, it was Captain John Nare, Arson Investigator for the Burbank Fire Department initiating a live training exercise for firefighters in property scheduled for demolition at 2223 Catalina Street in Burbank……..

See the whole story here at BurbankNBeyond along with a photo gallery
http://burbanknbeyond.com/10/featured/burbank-fire-training

The Burbank Fire Department hosted an Extrication Seminar for UCLA Interns to show the Interns the timeline and the procedures that go on from the time of an accident, to the time the patient arrives at the hospital. Paramedics and fire personal showed the procedures taken and why they are performed. BurbankNBeyond’s Host, Robert Vincent, was placed in the back seat to bring the viewer a prospective of what goes on inside the vehicle which was located at the Burbank Fire Department’s Training Center. Editor Steven J. Lynch did a masterful job with this four camera shoot. The Burbank Paramedic program is one of the finest in the country and has been the leader in several areas thanks to the dedication of the Burbank Fire Department personal involved over the last several decades.

BurbankNBeyond is the ONLY local news organization that brings you the sights and sounds of the events in Burbank.  See this new 27 minute video now.

Fire Camp 2011 held this weekend at The Burbank Fire Department’s Training Center, Burbank middle school students from Luther Middle School took part in this exciting event. Fire Camp gets teenagers in Burbank’s Middle Schools who might be interested in Fire Service as a career, they got to see live demos and even got hands on.

BurbanknBeyond’s own Robert Vincent got to be on hand Friday evening when the class started, and will be bringing you a video report shortly.

Captain Greg Rhodes explaining how the firefighter put out an auto fire. Burbank Fire ROP Students (top photo) were on hand to help the overnight event go smoothly. (Photos By Ross A. Benson)