Twenty fifth-grade students from Bret Harte and Thomas Edison Elementary Schools met for a Day of Story at the Buena Vista branch of the Burbank Public Library on Thursday, March 1.

The students worked one-on-one with volunteer mentors from the Burbank area on developing an idea for a story and creating a movie poster for it, according to Burbank Unified Arts & CTE Coordinator Peggy Flynn.

Burbank Business Partners, a group of local business people who fund and mentor programs for Burbank public schools, wanted to offer a program for students who may not yet have had much exposure to arts, theater and storytelling.

Participants and mentors at the Day Of Story show their posters at the Buena Vista branch of the Burbank Public Library. (Photo By Ross Benson )

Not every child will find a passion in math, science or sports, was Burbank Business Partners’ reasoning, and the group felt it was important to provide an additional outlet to help young students explore their creative and expressive sides.

So the BBP partners with Young Storytellers Foundation, an organization that has provided many programs over the years in Burbank public schools. In the Script to Stage program, YSF teaches students the elements of  storytelling, while partnering each student with a mentor to guide and develop the young writer’s voice. 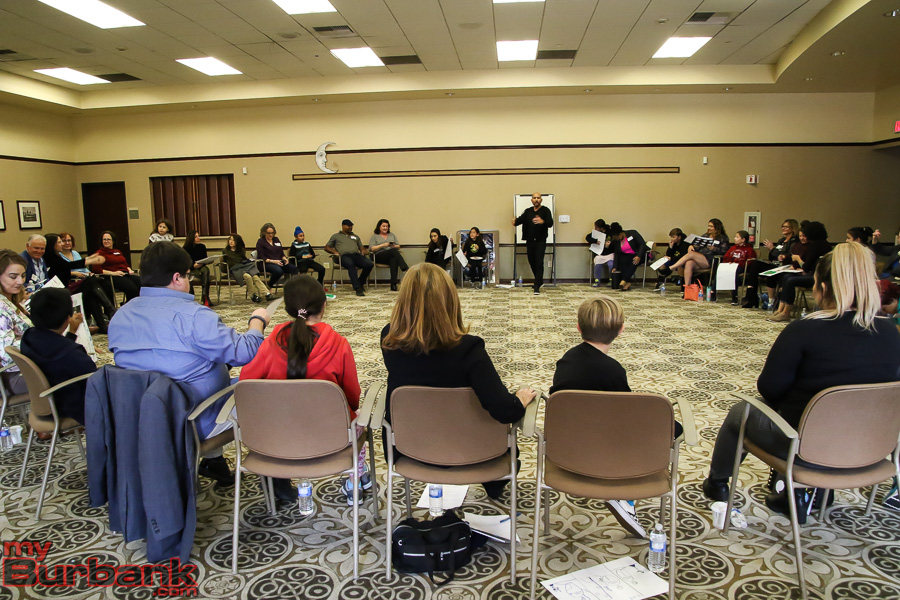 Storytellers gather to tell their stories. (Photo By Ross A Benson )

BBP is sponsoring the Script to Stage program for these students in the coming months. Over seven weeks, YSF and the volunteer mentors will provide sequential storytelling training once a week at Bret Harte and Edison schools for the participating students during lunch period. 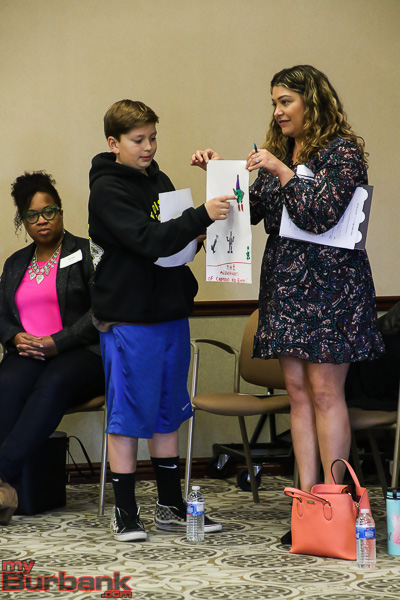 Jessa Freemyer of the Cusumano group helps her student during critiques. (Photo By Ross A Benson )

The Script to Stage program will culminate in a Big Show at which the students’ stories are acted out by professional actors in front of the students and others.

“Burbank Business Partners is dedicated to the proposition that the success of our community depends upon the strength and quality of our schools and Burbank Business Partners is committed to engaging the entire community – businesses, teachers, parents, and students alike – to build partnerships that ensure we are not only meeting, but exceeding, the needs of our most precious commodity: our children,” commented BBP Chair Michael Cusumano.

“The Young Storytellers message is that every child has a story to tell and every voice is important,” Cusumano added.

“Our participation in Young Storytellers is an investment in our youth and is but another step towards enhancing the educational experience that is available in our community.”

Participants and mentors at the Day Of Story show their posters at the Buena Vista branch of the Burbank Public Library. (Photo By Ross Benson )

Storytellers gather to tell their stories. (Photo By Ross A Benson )

Facilitator Damon Lira speaks to the gathered group giving them critiques and suggestions. ( Photo By Ross A Benson )

Jessa Freemyer of the Cusumano group helps her student during critiques. (Photo By Ross A Benson )

(Photo By Ross A Benson )

Facilitator Damon Lira reacts to a story being told. (Photo By Ross A Benson )

Ten fifth-grade screenwriters from the school partnered with mentors from Walt Disney Studios to develop scripts over the 2015-16 school year. Professional actors came in and read those scripts for “The Big Show” to an audience of the entire fifth grade.

The students meet at lunch for several weekly sessions in the fall and the spring with their Disney mentors and learn about script writing, explained McKinley Principal Liz Costella. 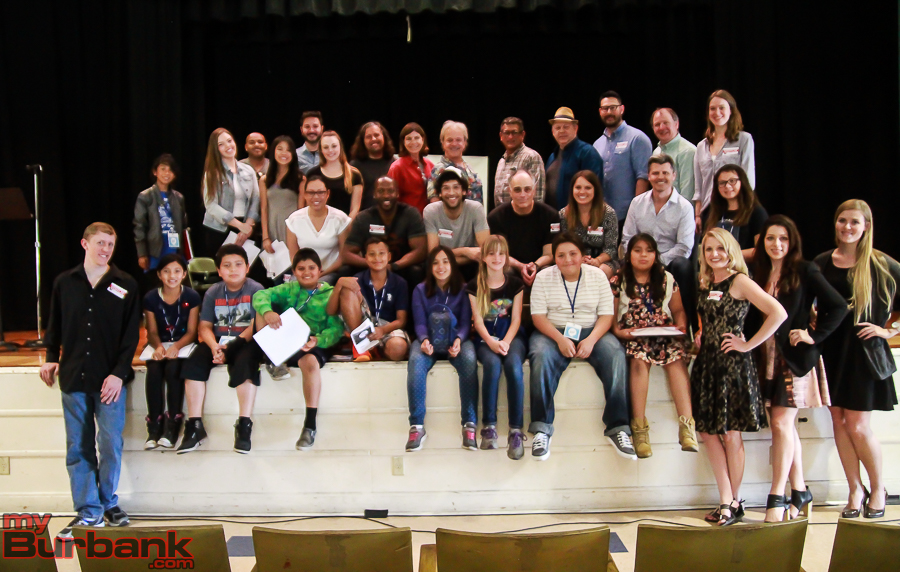 “Their mentors help them create a script that can come alive on the stage,” she went on to say. “Disney gets actors to act out the scripts the day of ‘The Big Show.’ The actors don’t see the script before the day of the show.”

Disney’s Robert Bishop acted as head mentor for the program.

“DFL” – A rookie T-Rex wide receiver must learn to believe in himself to defeat his rival, a professional linebacker velociraptor, in order to win the Dino bowl.” – written by Robert Garayoa, mentored by Brian McDevitt.

“The Lightsaber Steal” – “Four people. One trophy. Who will win?” – written by Adriana Flores, mentored by Alex Kang.

“Making Friends” – “How a cat and two marshmallows become friends and help each other.” – written by Samantha Aquino, mentored by Rene Benavides.

“The Minecraft Story Mode” – “A recent college graduate sets out to write and design the coolest Minecraft game for the chance to win $1.3 million prize.” – written by Guillermo Rodriguez, mentored by Manny Lima. 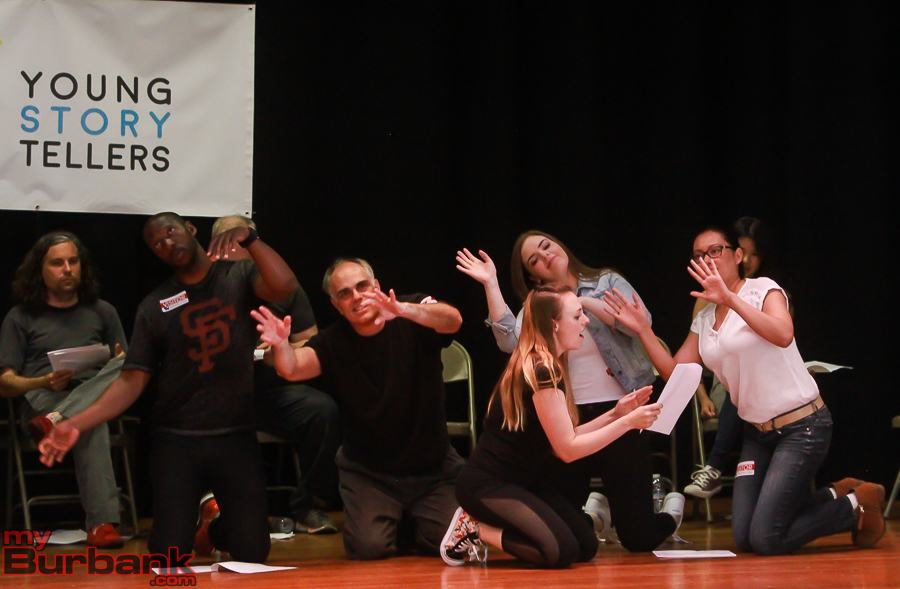 “Castle Moonlight” – “This is a story about a princess named Sarah and a Knight named Henry who has to fight an Evil Octopus.” – written by Alexander Aviles, mentored by Natalie Steffies.

“The Magical Adventure” – “Sunset the ghost cat must venture out to find a cure for her friend, Delta the Wold, who no longer is a wolf…” – written by Danielle Yap, mentored by Marcelina Hollender.

“The Strangest Story Ever” – “This is a strange story about an ordinary potato who saves his friends by doing something simple.” – written by Kelly Fitzgerald, mentored by Diana Stone.

“A Long Journey” – “The story of two people.” – written by Betel Merida-Flores, mentored by Beau Puckett. 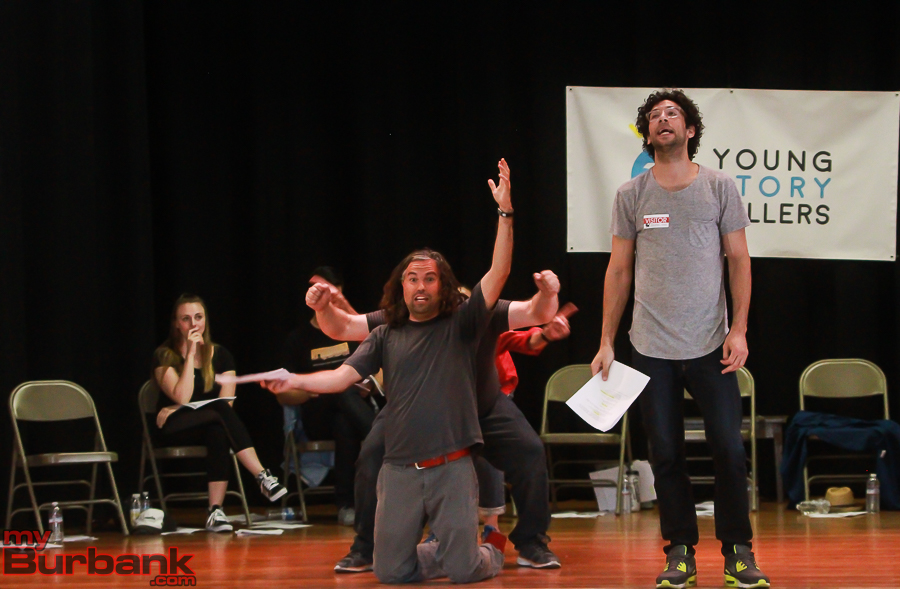 “Dun Dun Duuuun…” – “In the woods, Caroline finds a doll, but the doll is actually eveil and curses Caroline and the whole town. So Caroline, along with the help of her friend Rene, must uncurse the town, learning how to do the dab along the way.” – written by Genevieve Corea, mentored by Amanda Oberg.

“The New Kind of Donoville” – “Two brothers must compete against each other for the kingdom as the king is dying.” – written by Donovan Feinberg, mentored by Amanda Raymond.

“This a wonderful program to have at McKinley; the students involved feel pride in seeing their script come to life,” commented Costella. “The other students who are the audience members are not only proud of their friends but they get see what an idea can become.”


The McKinley Young Storytellers program culminates with a visit to the Walt Disney Studios main lot in Burbank for a wrap party. Students will visit with their mentors a final time and check out a set or sound stage on the lot.

Three Burbank students directed and shot film projects on Universal Studio’s backlot through a New York Film Academy (NYFA) week-long intensive film-making course. The students were selected, along with 12 other students from Culver City, Venice and Los Angeles, after applying for a scholarship through a partnership with the Young Storytellers Foundation (YSF.) 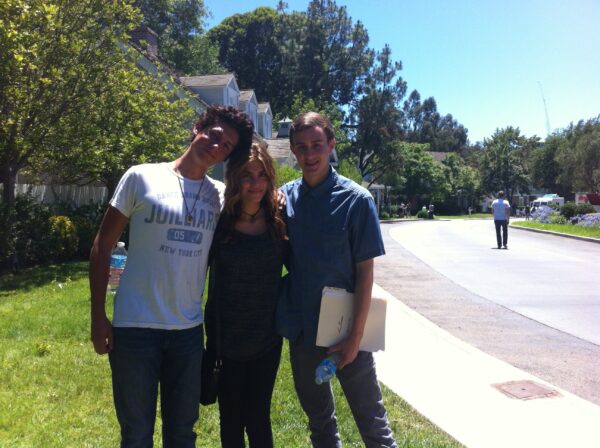 Alumni from the course are also paired with a professional mentor from NYFA’s faculty and return to participate in workshops administered by their professional mentors. Students who have participated in Young Storytellers and Young Moviemakers programs (YMM) at their respective high schools are able to apply for the NYFA scholarships. 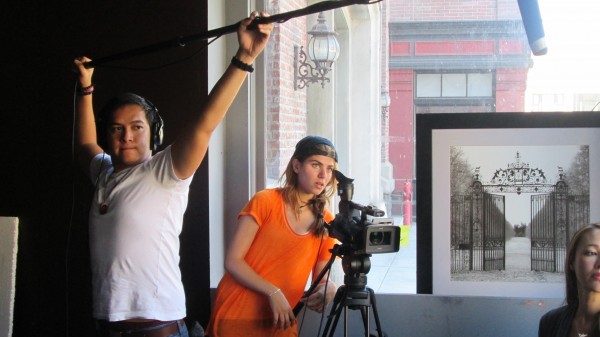 Shirwani, who begins freshman year of college this fall at Los Angeles Valley College, was first exposed to both the YSF and YMM programs through Play Production class at Burroughs. She mentored students at Jordan Middle School in the YMM program. She also helped incoming freshman write a script and performed some of the scripts.

“I enjoy helping kids and bringing out their creative side,” Shirwani commented.

“This was unbelievably intense but the most fun I’ve ever had,” Shirwani said about the NYFA film-making course. “I met so many amazing people and learned more than I could have ever imagined.”

“Throughout all these programs and YSF, I found that I really love film making and all the aspects of it,” she added. “I am forever grateful to them.” 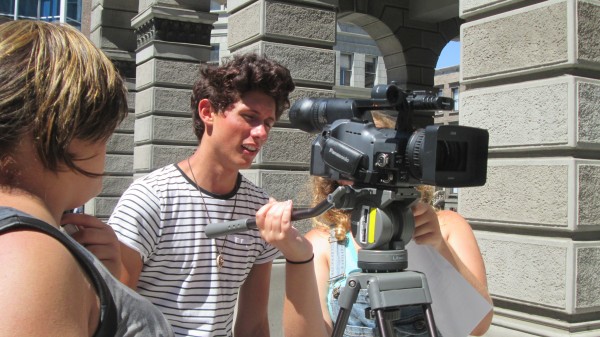 Brennan Flynn peeks through the camera. (Photo By Pierre Pandy)

“The experience was wonderful because it broadened my horizons – previously, my only experience was in theater,” commented Flynn, who has been involved with YSF and YMM for the past two years.

“It also put me in the director’s chair for the first time in my life, and it was such a rewarding experience to see what I created go from a script to a fully produced short film so quickly,” Flynn added.

“I have a new knowledge of, and especially respect for, all the different jobs involved in making a film now that I have written, directed and edited my own project,” he also said. “I am eternally grateful to YSF for giving me the incredible opportunity of learning and working NYFA for a week.” 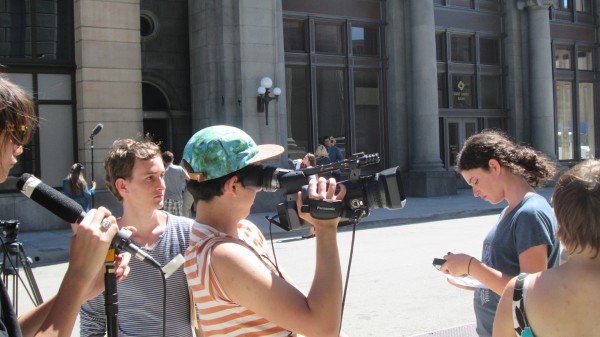 NYFA’s scholarship commitment provided for nearly $25,000 worth of tuition to the summer program.

“For many of our students, an experience like this is simply out of reach and we are so grateful that NYFA has provided this camp completely tuition-free,” commented Bill Thompson, YSF Executive Director.”

“It is amazing to watch our young film-makers shoot their scripts with professional actors, a professional crew, on an actual Hollywood studio backlot,” Thompson continued.”This week strengthens their confidence in the power of their voice and we can’t wait to see what they create next.”

More information on YSF can be found on their website.

Students from David Starr Jordan Middle School recently attended a private screening of their own short films at the ABC/Disney Studios in Burbank. The short films were created as part of the Young Movie Makers (YMM) weekly program, with input and advice from student mentors from John Burroughs High School.

Approximately 25 students in one of teacher Richard Lightfoot’s advanced computer science classes participated in the Young Movie Makers program at Jordan. Guest teachers from the program, arranged via the Young Storytellers Foundation (YSF), visited the class to discuss and demonstrate various aspects of film making. 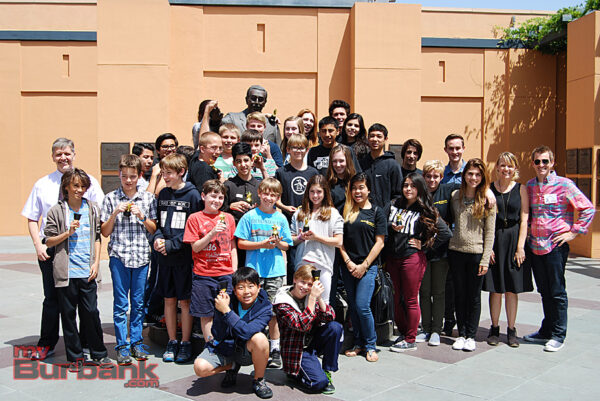 “Students work in groups to conceive, edit and produce a film by the end of the program,” said YSF Executive Director Bill Thompson. “They work with high school theater and film students as their mentors.”

“The groups write a three to four-page screenplay and plan pre-production,” explained YMM coordinator Laura Manchester. “They film and operate the cameras, edit, use a green screen and add special effects all themselves.”

The culmination of the year-long program is a luncheon and screening of the six student shorts, hosted by Disney Studios. 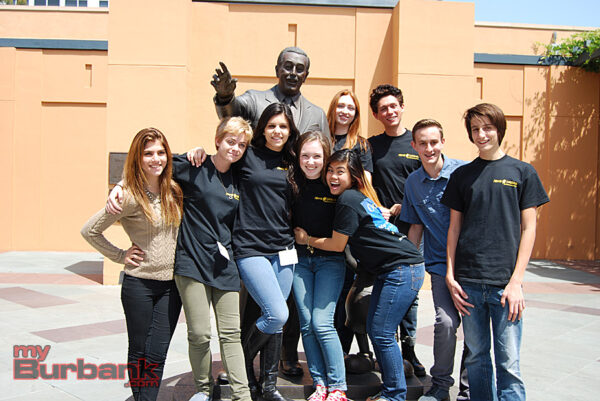 Manchester also teaches some of the YMM classes, along with other industry professionals.

“I’m able to take some of what they teach and add to my own curriculum,” said Lightfoot, who teaches several computer science classes at the middle school.

Students in his classes learn basics of photography, videography, storytelling, Microsoft programs including Office and Excel, Google Docs, and programming skills in Perl and Python. They also produce the daily Cougar Vision school television program and the school Yearbook.

“I really love having the high school kids come down and through their conversations with the kids they get to know each other and work together,” added Lightfoot.

“They were unbelievably mature and worked so hard and were really into it,” JBHS student Sabrina Wrabley said of her group of middle schoolers, “It was fun.” 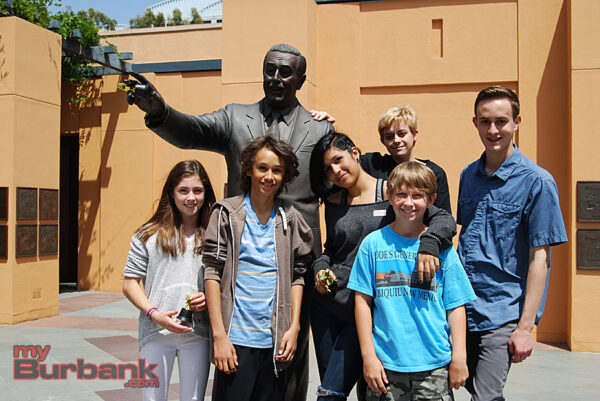 “We wanted it to be a thriller,” said student Troy Outwater of his group’s film Day and Night. He explained the idea started from a dream had by classmate Sawyer Kaplan.

The YMM program is in four middle schools in the Los Angeles area, including Burbank, Culver City, Venice and Inglewood. YSF’s Script to Stage program is in 36 school across Los Angeles and New York City. The program at Jordan is supported by the Burbank Arts For All Foundation and Disney Studios. 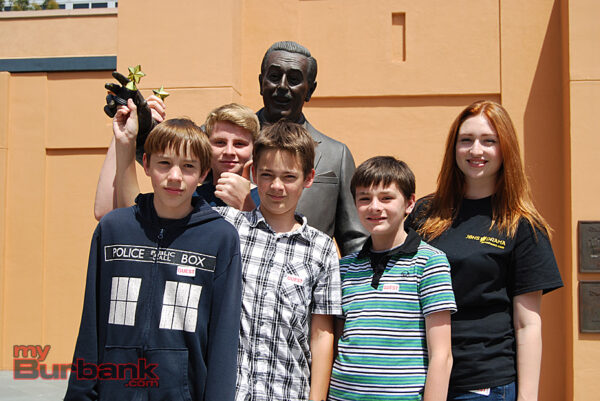 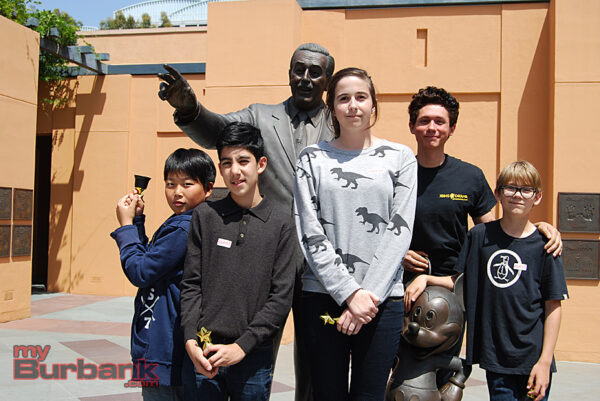 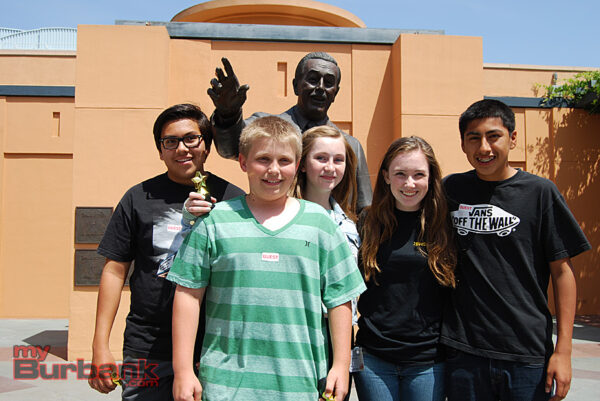