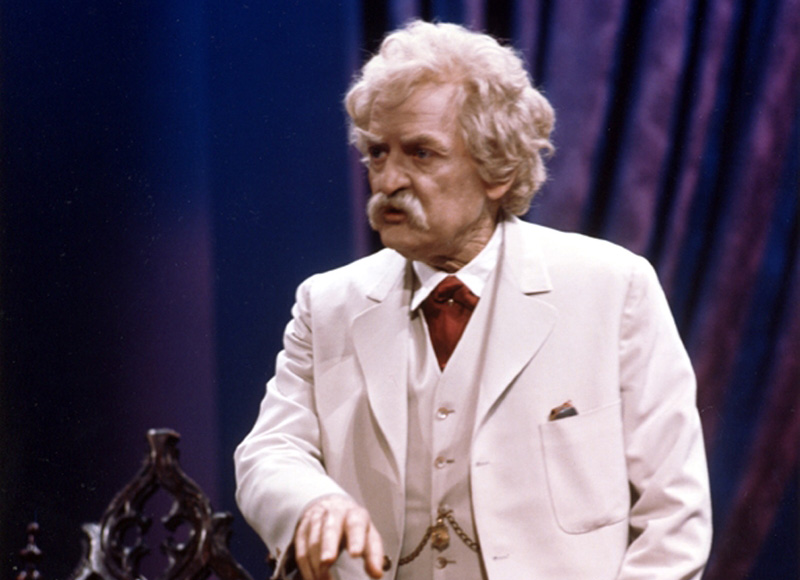 When American originals like George Carlin and Johnny Carson took their final bows, we had the consolation of being able to see them again on DVDs and YouTube segments and film clips. But what about the original American original, Mark Twain?

For that, we’ve got Hal Holbrook. Last month, Holbrook’s Mark Twain Tonight! appeared for one glorious evening on the stage of the Fox Performing Arts Center in Riverside. Holbrook’s Tony Award-winning solo so completely captures Twain that we can honestly claim that he’s enjoying an afterlife after all.

Twain would’ve chuckled at the irony of that observation, given that he’d become a closet atheist. (Not wanting to risk tar and feathering, Twain didn’t want his explicit writings on that subject to emerge until after his death.) The hypocrisy of humankind and the harshness of nature left him no room for any god he would care to worship.

Still, Twain would have been delighted to know that his Holbrookian afterlife isn’t continual singing in a heavenly choir. No, instead he continues to be his irascible, hugely entertaining self, chomping on his cigar and clearing his throat before delivering another zinger.

As pessimistic as could be about human nature, Twain could be equally optimistic about business ventures, letting himself be as dazzled by newfangled electrical devices (he was a good friend of Tesla’s) as many of us are by the latest killer app. At times, Twain nearly lost his shirt, but he managed to keep the shirt on—and the white suit too—thanks to his very successful speaking engagements.

Holbrook’s solo draws at will from Twain’s books, miscellaneous writings and remembered sayings—a huge trove. The show, most probably the longest running in the history of American theatre, benefits from nearly a half century of honing. “Mark Twain never stops surprising me,” says Holbrook. “He’s kept me fired up and asking questions most of my 89 years.”

Twain’s durable relevance flows out of the humor of small moments and large issues. He could fashion a story of enduring hilarity about a jumping frog and also hurl thunderous prose against those who would set America on a course of empire. (Twain himself was a member of the Anti-Imperialist League at the close of the 19th century, opposing America’s war in the Philippines.) Whether you agree or disagree with Twain, it’s hard to believe you’re not encountering someone in the here and now.

Twain embodied the best of the American spirit: skepticism mixed with optimism, wit and wonder, and like Twain’s alter ego Huckleberry Finn, a detestation of all things phony. And by channeling Twain so vibrantly all these years, Holbrook has himself become a national treasure.

BTW, Riverside’s become a great city for a getaway weekend. Stay at the Mission Inn, have a short stroll past the pedestrian-friendly byways of a revitalized downtown, and catch a performance at the Fox Performing Arts Center. Visit www.RiversideDowntown.org for more info.