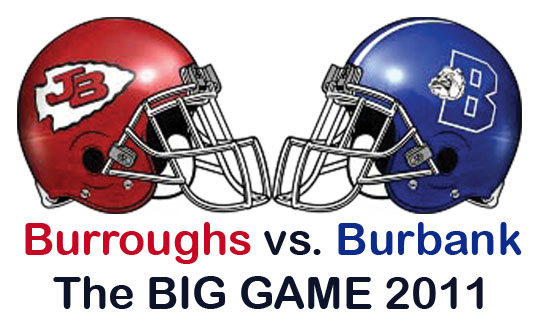 Editors Note:  With his first Upon Further Review column, Sports Editor Tom Crowther brings his unique look to the sports scene in Burbank.  Crowther, a former high school player as well as Head Varsity Coach during his career, has seen all sides and can provide an informed and sometimes passionate position.

My wife and I recently started watching the television drama Friday Night Lights on our Netflix account. Truth be told, we are hooked. As a former coach, my favorite scenes are from the game action and the speeches on game nights.

In reality, there is but one night each season where high school football in the city of Burbank mirrors the kind of crowds, attention and pandemonium displayed on the show — when the Burbank-Burroughs game takes place it often draws crowds estimated at 10,000 fans.

There was talk on both the Burroughs and Burbank High School campuses this week that the rivalry game on November 11 may have lost some luster this year because of its location. With Memorial Field under construction the game was played at Arcadia High School some 20 miles east of the city of Burbank.

When Burroughs broke open a close game in the second half the game itself became somewhat of a snoozer. The only real drama left was whether or not Indians’ tailback Zander Anding would top the 300-yard mark again. He did.

When the final gun sounded, Burroughs celebrated a 34-7 win behind 349 yards and four touchdowns from Anding. It had the initial feeling of just another game — the Tribe had ridden his back to bully opponents all season. The reality though is that memories from this game and this season may teach a team made-up mostly of seniors far more about life than the hoopla that typically surrounds the Big Game. This season was about much more than a single night.

Burroughs claimed its third straight Pacific League Championship by beating Burbank. Although officially it must share the league title with Arcadia High, Burroughs beat the Apaches on their field in convincing fashion earlier this year, just as they beat opponents on their own turf all year.

Construction on Memorial Field not only forced the Indians to play all of their games on the road, but the team was forced to practice at Luther Burbank Middle School as well. That alone was reason for Burroughs to not show up at least once on a game day. However, that never happened to this group because head coach Keith Knoop made sure of it.

“We really just tried to convince these guys to work hard and to make no excuses,” he said. “We told them that all we needed was a field with grass and some lights… heck we played a lot of games in the past on dirt (a reference to the worn out sod of November games in other years).

“They did it, they have worked really hard and I am proud because these guys never took shortcuts,” Knoop said.

The team never made excuses either. When Anding suffered a partially collapsed lung in an October contest at Crescenta Valley and the Indians suffered their lone league loss at Muir the next week, a league race they had pulled away in tightened.The Indians responded as champions do. They blasted Hoover and Burbank in the weeks that followed and they secured a third straight league championship.

This unit was also a team, despite the fact that one guy gained much of the attention. Anding not only faced countless eight and nine man fronts on the field in efforts to stop him, he also faced constant members of the media eager to speak to him about his on the field success.

To his credit, Anding always shared the spotlight giving credit to his coaches and to his line and to just about anyone but himself. On my way into the stadium for the Big Game I actually heard a group of students talking about Anding’s modesty in recent articles instead of his on the field success. Remarkable, considering he set single season records for the school and the league with 2,453 yards this season with 25 touchdowns.

Members of the Burbank and Burroughs teams from last season had the honor of playing the last game on the grass (and dirt) of the old Memorial Field. The next group of players will have the privilege of opening a new multi-million dollar stadium. Many teams from both schools enjoyed the hoopla of the Big Game over the years. Few, however, should be as celebrated as these Burroughs Indians.

Regardless of what they do for an encore in the CIF Southern Section playoffs next week, these Indians were a model of what high school sports are all about. This game, while not possessing the fanfare of some of the rivalry games of the past certainly ranked right up there in importance.