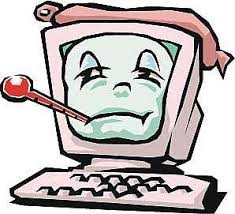 A human cold virus has mutated into a silicon virus, causing computers to catch cold. Maybe yours.

“It probably started when someone didn’t cover their mouth and sneezed onto their keyboard,” theorizes University of Ruritania computer guru Prof. Nicolai Fraudescu. “Viruses mutate very rapidly, and some of them must have found a way to survive inside a computer.”

Unlike the software sort of virus that were used to fighting, the “computer cold virus” is a primitive, microscopic organism like its “common cold” counterpart. “But here’s the funny thing,” says Prof. Fraudescu. “These new viruses can transmit an electronic signal to other computers that cause them to make new viruses.” Not unlike 3D printing.

So far, there are only three reported cases of the computer cold in Burbank.  “But this problem can spread very rapidly once the virus has a foothold,” warns the professor.  He shares the following tips:

Signs that your computer may have caught a cold

The computer is warmer than usual.

The screen has a green tinge.

Turn the computer off and unplug it.

Keep it in a cool dark place.